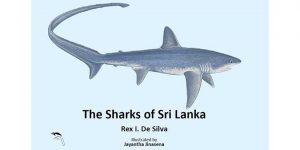 The Wildlife and Nature Protection Society (WNPS) hosted a marine chat with Rex Ian De Silva on Sri Lankan sharks, their identification, and natural history yesterday (25) at 10 a.m. at the WNPS premises.

Rex Ian De Silva is a pioneer Sri Lankan diver awarded the International Legend of Diving award in 2013 – the first and only individual from the Indian Ocean region to be honoured by this award. He’s an underwater photographer and astrophotographer. He is also a recognised author focusing on sharks, marine life, and seabirds; he is the author of The Sharks of Sri Lanka and approximately 110 other publications.

We caught up with De Silva for a quick chat about the lecture and the highlights he discussed that he feels would interest any amateur naturalists, particularly laypersons such as ourselves, who, up until this lecture was announced, were unaware of the existence of sharks in Sri Lankan waters.

The lecture was all about sharks in Sri Lankan waters. According to De Silva, there are 67 confirmed species and six unconfirmed species where there is some evidence but not strong enough. There are also sharks in freshwater – three species to be exact in Menik Ganga and other more remote rivers.

The lecture was essentially “an introduction for naturalists to the principles of shark identification” where there was a look at how to identify sharks in Sri Lankan waters.

Sharks are difficult to identify, De Silva said, adding: “While there are exceptions, more often than not, they have very minute differences like the positioning of the fin, shape of their teeth, etc.”

There was also a focus on the natural history of sharks, which spoke of general mannerisms of sharks. For example, shark embryos cannibalise their littermates in the womb, with the largest embryo eating all but one of its siblings. Therefore, only two fairly large sharks were born.

Is conservation a necessity? 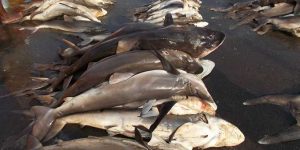 Shark numbers have declined over the years. De Silva shared that in the 70s, and back when he first started diving in 1956, there were plenty of shark species. However, the numbers have largely depleted primarily because of overfishing – the industrial scale at which fishing is done at present. A serious example would be the Japanese drift gillnets, popularly referred to as “curtains of death”, that go on for miles in the sea. There’s also “dynamiting”, which is to use dynamite as a tool for fishing – this method was mostly used in Mirissa and Trinco, but recently, there have been occasions where it was spotted even closer to Colombo.

Another reason why the numbers are dropping is, of course, the loss of food. Sharks are predators and even though humans very rarely go out, for sharks especially, when we catch all the other fish in the sea, sharks will have less to survive on.

Another practice that has caused great damage to shark species is the practice of finning, which involves cutting the fin off of the shark and releasing it back into the ocean where it is then left to die. This is a very cruel practice adopted in order to maximise profit as it allows poachers to collect more fins, considering that if you are to capture a whole shark, you will not have space to take more than just a few fins. This practice has been banned by the Fisheries and Aquatic Resources Act of 1996, which requires that all sharks brought in from Sri Lankan waters must have fins attached and that one cannot bring only its fins.

The reason why fins are so popular is because of the famous shark fin soup. De Silva said that the fin does not add anything in terms of flavour to the dish; it is only a traditional preparation which is sold at exorbitant prices, most popularly in Hong Kong, Taiwan, and China, to name a few.

De Silva also touched on a topic that is of personal interest to him, which is about the “giant trevally” fish. In fact this fish, for reasons that yet remain mysterious, attack and kill reef sharks much larger than themselves, but don’t eat them. After repeated high-speed ramming, the shark, bleeding from its gills, sinks to the bottom and dies.

Then he spoke about the “ghost shark”, also referred to as the chimaera, which is a rare species that is closely related to sharks but are in an order in themselves and are separate from the shark.

De Silva said that, considering how most fishing nets, much like the curtains of death mentioned earlier, catch anything and everything, there is a certain percentage of shark flesh in your regular everyday fish bun and other seafood dishes, which was an interesting closing note and something we should all consider – the cruelty of humans and how we are truly killing our planet with our industrial practices.
————————

Transforming the food delivery industry from within

July 26, 2021 byNews Admin No Comments
The pandemic has seen delivery platforms (food and otherwise) become something of a lifeline in times of lockdown and travel restrictions. It has undoubtedly become a big market, and it is likely to s

Should the fishing go on?: Damage caused to the fishing industry points to MV X-Press Pearl disaster

July 2, 2021 byNews Admin No Comments
Following the MV X-Press Pearl incident, a massive amount of plastic and chemical products, among others, were released into Sri Lankan waters. Environmentalists and public institutions probing the en