Last Saturday (22), the National Museum of Colombo was a little bit more crowded than it usually is and was beheld in a manner which was certainly different to the normal way in which the Museum of Colombo is enjoyed. At 4 p.m. yesterday, began what is known as the museum walk which is quite a new concept in Sri Lanka, hosted by an adherer of museology, Hasini Haputhanthri. 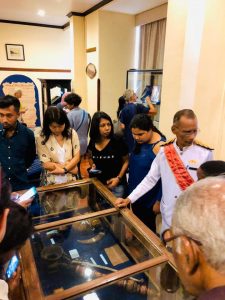 Hasini Haputhanthri is the Founder of Timetravel Ceylon which sounds a great deal like an established foundation where many employees could be found. However, it is simply Haputhanthri who conducts the entire organisation on her own. It is her personal innovation so that she may explore her passion of time travel – not in a way where we would have to manipulate the fabric of space-time but through stories; a perfectly good substitute for physically travelling through time.

The walk held on Saturday (22) was one of the first which Haputhanthri has conducted in the National Museum. Before this, she has conducted walks in other historical locations such as the famous Mount Lavinia Hotel.

The journey to Time Travel Ceylon

She hasn’t always been a guide of historical walks but in fact, she used to be a sociologist by occupation, trained by Delhi University, India and Lund University, Sweden. She then worked in the development sector until 2017, when she began studying museology at Colombia University, New York. One thing which always followed her was her deep desire to learn more about the history – the history of anything. “I have always been fascinated with time travel, to imagine historical situations and imagine what life would have been like back then,” she said.

She observed, while doing her museology degree that even when it came to the articles which she wrote, it was only a selected amount of readers which she could attract. She realised that, especially with the people of Sri Lanka, the general interest towards history and stories from the past are extremely lacking. Hence, after submerging herself in research, she returned to Sri Lanka and began to think of a way through which she can get the knowledge to the people by sparking interest and a desire to know. 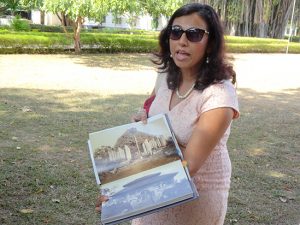 Hence she came up with Time Travel Ceylon, a way through which Ceylon can be witnessed in a completely new – or perhaps old – light. For about two years, she has been conducting a few walks, the most popular one being the one she holds in Mount Lavinia Hotel. This has slowly accumulated a large following and a considerable amount of awareness has been spread about it amongst the people of Colombo. It has become so popular that Mount Lavinia Hotel has actually asked her to conduct a session every month. The reason people like it so much is because of the way she presents the story to them. She does not simply parrot a story which she has read in a book but rather does her own research and finds out the real facts about the case, and then she thinks of what interpretations can be made based on different viewpoints of the different people involved in the story. 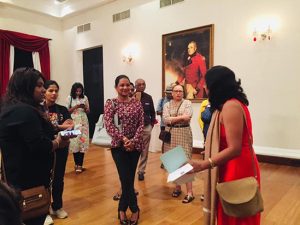 She certainly adds some extra effects as she goes along the walk with role-playing situations and such, where even the people can play an active role in the retelling of stories. This way, she can also achieve her dream of time travel – being granted the opportunity to witness the stories take place right before her eyes. Furthermore, she does not simply go around the normal hotel showing people the normal rooms that one may see every day. She even includes a visit to Governor Maitland’s room and other locations which are not always open to the public. She has even found original documents which can reflect the thoughts and feelings of the persons involved in the scenario and of course, when it comes to Mount Lavinia, she always makes sure to educate the people on the great legendary love between the Governor and the maiden Lavinia.

That is the main focal point of the people with regard to the Mount Lavinia walks, she said laughingly, as it really does show how predictable people can be. Similar to the walk she does in Mount Lavinia which she calls a “heritage walk”, she also does another heritage walk in Kandy – of course, another one of Sri Lanka’s most culture-rich cities. Here too, she goes deep into the stories and tries to find as many personal accounts as possible so that the stories may be told through the eyes of the people who experienced it first-hand. 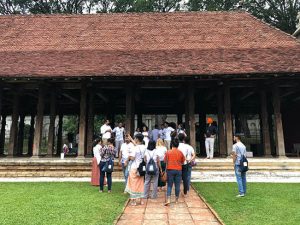 The other kind of walk is what took place on 22 February, which is called a “museum walk” because once again she has extracts from the original journal of Governor Gregory who is responsible for the establishment of the museum, and once again she witnesses the story manifesting in front of her. For kids, although not done on the 22nd, she conducts a separate walk in a more fun manner where they get to play little games such as guessing the artifacts, drawing them, and such, so that they will have a lasting memory of the trip. 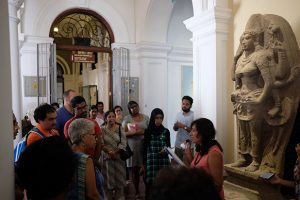 She is presently planning a few more heritage walks, one of Kandy, one of colonial Colombo, and one of Polonnaruwa, which is one of her favourite cities.

While currently all it requires for one to join a walk is to register through Time Travel Ceylon’s Facebook page, she hopes to convert it into a social enterprise-modelled business. She has understood that right now tourism is an extremely important aspect to the economy as well as to the hearts of the people. She said that along with all the diversity and natural beauty Sri Lanka has to offer, it also has the aspect of a great and engaging history. What she believes can amp up tourism is adding the time dimension to the geographical dimension. “It would add so much more to the experience of the viewer,” she said.

She strongly believes that Sri Lanka has a great deal of potential to come forwards as a country which travels through time. While conducting her research for her museology degree she did a baseline study on Sri Lanka, which is how she found out the multitude of treasures available in the Colombo National Museum. However, she is sorry to say that there is much room for improvement with regard to the development of the museum experience in Sri Lanka if it is to reach international standards. “It still remains the ‘katu gedara’ which it was back then,” she expressed. She believes we are still stuck offering a very traditional museum approach, while now all across the globe there are great ways of making the whole experience more engaging and less boring.

Step by step, with activities such as hers, it is quite possible that Sri Lanka’s history might shine on the mainstream and prove to the world what an amazingly fascinating time machine our country can be.

Unscripted presents ‘To you,’ EP launch and screening