The United Nations Population Fund (UNFPA) in Sri Lanka conducts projects across the country with the aim of improving the living conditions of the people of Sri Lanka. They claim to be proud of Sri Lanka for having risen up from being a lower middle-income country to the level of an upper middle-income country, despite having been faced with many unfortunate challenges such as the devastating tsunami in 2004 and the 30-year civil war that ended in 2009. While they believe the growing population of Sri Lanka will stabilise by 2024, they promise to continue rendering help for the country’s welfare.

However, this “incompetency”, which is still often linked with disabled people in countries like Sri Lanka, is an erroneous perception we need to learn to reject. In fact, their ability to excel in whatever they wish to in alternative ways is what grated them the official title of “differently abled” in place of “disabled”. Nevertheless, the stigma surrounding the differently abled is still ever present; in a report done by the United Nations Convention on the Rights of the Child (UNCRC) found that some parents wouldn’t even let their children play with other children who have disabilities.

In light of this, the UNFPA has been organising the International Conference on Birth Defects and Disabilities in the Developing World (ICBD) for nine consecutive years. The UNFPA believes that those with disabilities are a seriously marginalised and ignored in society and thus have trouble obtaining sexual and reproductive healthcare services. They believe disabled persons have a higher vulnerability when it comes to situations relating to reproductive health. In 2008, the Convention of Rights of Persons with Disabilities (CRPD) was ratified internationally and in 2016, Sri Lanka ratified and accepted the convention.

The convention was the first in the world to address the issue of disability in this manner and depth as well as Sri Lanka’s first international treaty which legally bound them to the international platform through a treaty on disability. And as per the CRPD, all people of the country must be given access to sexual and reproductive healthcare services. Regardless of the convention, the UNFPA believes: “These services are inaccessible to persons living with disabilities for many reasons including physical barriers, stigma, and discrimination. Sexual and reproductive healthcare services have been largely overlooked in policy, planning, and service delivery by social, legal, health, and welfare services.” 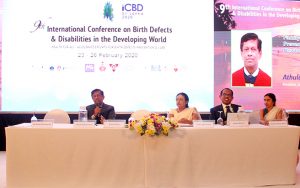 This year’s conference was held on 25 February at Cinnamon Grand Colombo and was followed by a panel discussion titled “Addressing Birth Defects from the Lens of Human Rights and Inclusion”. The panel consisted of three individuals, all of whom are experts in their respective sector and are involved in the field of disability and healthcare. Prof. Athula Kaluarachchi is a senior lecturer in obstetrics and gynaecology of the Faculty of Medicine at the University of Colombo (UoC); Prof. Subhangi M.K. Herath is a professor of sociology of the Department of Sociology at the UoC; and Dr. Shamini Hettiarachchi is a senior lecturer of the disability studies of the Faculty of Medicine at the University of Kelaniya (UoK). The panel was moderated by Janitha Rukmal, a disability rights activist and the Co-founder of Enable Lanka Foundation. He himself is disabled, which gives a clear message that anyone can be whoever they aspire to be. 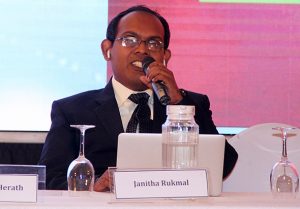 While Prof. Herath focused on how we as a society tend to discriminate differently abled people and must act as individuals in order to rise above the rest to truly accept them, Prof. Kaluarachchi was certain that those with disabilities have a clear right to sexual freedom.

Representing the UNFPA, Ritzu Naken spoke about how once in her country, Japan, disabled people were denied the right to sexual freedom because of their disabilities and were sterilised without consent. She sadly said that most of these individuals have now passed away. Naken was horrified at how people discriminate the differently abled, so much even to go to extreme measures of denying them their basic rights. 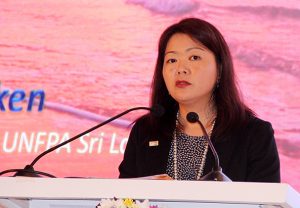 The audience included many individuals from various interested organisations. The most interesting audience members were, however, the groups of schoolchildren sent to gain knowledge and awareness about the right to reproduction of the differently abled. 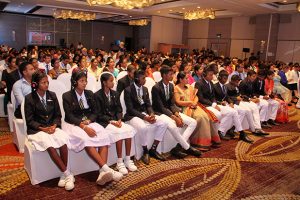 These youths are indeed the beacon of hope which can makes us believe that the attitude of Sri Lankan society may truly change when the generations of the future come forward to speak up for basic rights and humanity.