March 15, 2020 by Bernadine Rodrigo No Comments

Many organisations are founded with the aim of helping children, who are in fact an extremely vulnerable group in our society. Adults often fail to understand the delicate mindset of children and sometimes simply view and treat them as small adults, expecting them to understand everything that goes on around them and behave and react the way a grown up would. Then there are also those who simply don’t consider them when it comes to anything.

There is also a sector of society that takes advantage of children’s vulnerability, choosing to exploit it for their personal pleasure. This fuels the need for various groups consisting of caring individuals, who try their best at doing all they can to protect these children.

In general, however, children are offered minimal protection. Children, especially in Sri Lanka, are exposed to dangerous situations at home. Abuse – not just sexual but also just physical and mental – is still something they undergo in various households all over the country. It is rather common. And while some suffer less, there are some children faced with impossibly difficult situations.

All this suffering the children in our country have to undergo calls out for a method through which real justice will be served in favour of these innocent victims. Milani Salpitikorala, who never even wanted to become a lawyer, came to the rescue and began the Child Protection Force.

While she was reading law for her degree – a task which she found tedious due to her lack of the desire to follow it – she found out that there was one part of it during which she was always alert – child rights. Here, she found her passion and became determined that once she graduates and establishes herself, she would do her very best to excel in that field and bring justice – as the job requires it – to the suffering children of Sri Lanka.

In 2017, she launched the organisation with less than a handful of lawyers tasked with seeking cases of child abuse and trying to resolve them as fast as possible. Now, Child Protection Force has about 20 lawyers and they get hundreds and hundreds of cases each month.

What she has realised is that while we have a good set of laws in place and officials – maybe not always though – who are interested in trying to bring justice to these suffering children, it is simply the magnitude of cases and the slow and irksome process of trying these cases which makes it awfully difficult for the courts of Sri Lanka to put an end to all this crime. Child Protection Force believes that things must be done at the grassroots level to absolutely prevent crimes against from happening against children so that the justice system won’t have to come into play at all – i.e. preventing the child from going through all that trauma once again.

One thing Salpitikorala didn’t fail to mention was that the courts of Sri Lanka are not so victim-friendly. They are daunting, especially for a child, due to all the rigid processes which force the child to keep recalling the pain he or she went through over and over again.

However, what she noted was that the officials who spend their entire lives on cases such as these are indeed human; it can sometimes be difficult and even traumatic for them to have to hear these stories and go through the processes so many times.

She especially mentioned this about the officials at the National Child Protection Authority (NCPA) of the Ministry of Women and Child Affairs, who she said are working extremely hard – but just like those in Child Protection Force, they just have too many cases to cope with.

It is a sad notion that in our country, which speaks so much about values and virtues, has too many crimes related to our most vulnerable sector of society for our authorities and such organisations to handle. 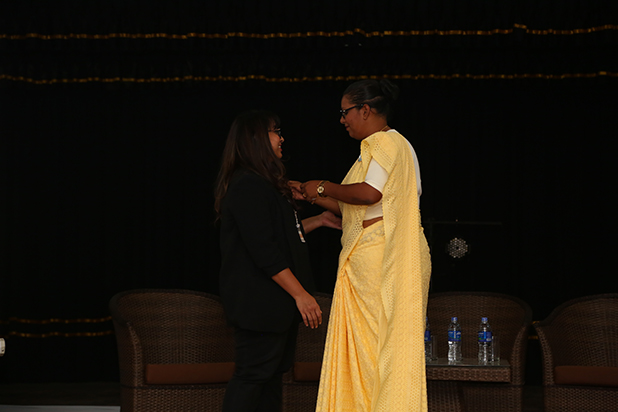 Hence, Salpitikorala had the idea of creating a force of responsible adults to protect children who have suffered abuse. This is why she created the Child Force Troopers initiative. It was launched on 10 March 2020 and which sets out three guidelines for grown-ups to follow in order to protect and also achieve justice for children.

The second is that if you come across a child whom you can see is in need of protection and real love and care, you need to take time off your schedule to help that child; even if the child lives on the streets or in a toxic household, you must be both brave and caring enough to take the initiative. She calls this walking the talk, as she believes that anyone can be a keyboard hero while not actually trying to do anything.

Lastly, a Child Force Trooper must be someone who does not discriminate against victims. If you are in apposition of power, where you can offer a job – or indeed a livelihood – to an individual who has suffered child abuse and has certain problems with regards to it, do not simply disregard them because of their suffering.

One can join the Child Force Trooper initiative by contacting the Child Protection Force. But to make sure you live up to the title, they require you to produce a monthly report of the work you have done.

We wish them good luck and applaud Salpitikorala for taking action that was desperately needed.

What you need to know about slip skirts

November 4, 2018 bythemorninglk No Comments
This week we focus on finding that perfect skirt, and we take advice from Sachini Nathali Sarathsena who has her own brand EN;THALI - a ready-to-wear line which includes made-to-measure garments.

Redefining the power of women – SheForShe 2.0

April 14, 2019 bythemorninglk No Comments
A forum geared to discuss various topics on the empowerment of women, SheForShe took place on 6 April at Sooriya Village.