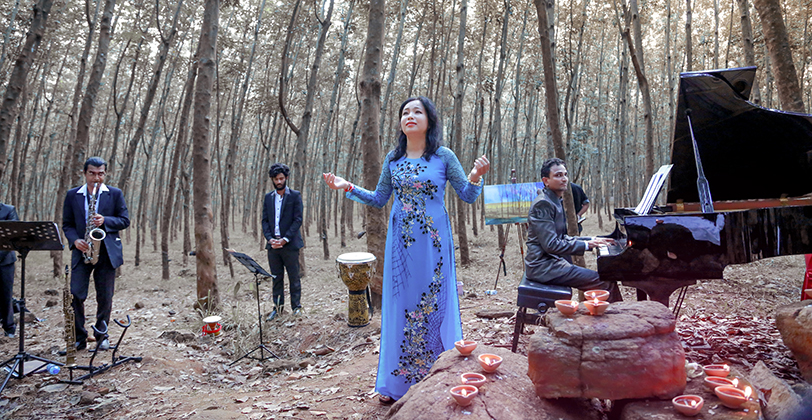 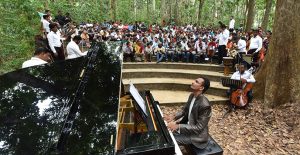 Opera Park Foundation, an organisation dedicated to creating awareness on environmental conservation through music, will be presenting the first-ever cave concert in the island on 1 January 2020 at the Fa Hien Cave.
Incorporating the natural acoustics of the Fa Hien Cave structure which functions as a natural amphitheatre, Opera Park Foundation will perform a series of original symphonies free of charge. 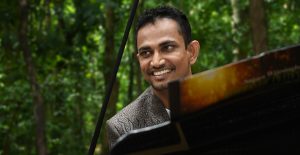 Speaking to Opera Park Foundation Founder Sagara Wijesinghe, who is also a composer for the event, he revealed that his organisation has up to date performed two other series of concerts. The first was titled the “Green Concert” and consisted of seven instalments that were performed in forests situated in Mihirigama, Gampaha, Horana, etc., and the second was the “Blue Symphony” concert, which was performed in the Algama Waterfall in Kegalle.

The purpose of these performances, which have all been done for the public with no charge, has been to create awareness about environmental conservation and to awaken a passion amongst music lovers to care for the environment.
The cave concert series is the latest addition in their efforts and is titled “Beyand Meeyasiya” in Sinhala, which is the amalgamation of the traditional word for “cave” used in Fifth-Century Sigiriya graffiti and the word used for the sound made by honey bees.

Fa Hien Cave, more commonly referred to as Pahiyangala Cave, is a site of archaeological significance to the world as Late Pleistocene human fossilised skeletal remains were discovered in the cave’s sediments during excavation.

The compositions, which are original works of the artists, will be inspired by this history of the location – the history of man and music. There will be an additional performance which is influenced by Chinese culture as the location, while not supported by any archaeological or historical evidence, is said to have been the residence of Buddhist monk Faxian after whom it is said to have been named. This remains, to this day, a legend.

The orchestra consists of a diverse group of professional instrumentalists who will bring to life Sagara’s vision – eight violinists, two cellists, violas, a double bassist, etc. – a musical posse of excellence if you will.

While Sagara also shared how in doing these concerts they hope to reinvigorate the listening culture in Sri Lanka beyond the song as there are more forms of music to listen to which we should open ourselves up to.

While the symphonies are just that, instrumentals there will be a special performance of an opera which will serve as somewhat of a teaser to what’s to come with their next performance, which is titled “Tharana Sigiri” – a Sinhala opera.

Sagara expressed that while they do not have any sponsors as it is purely done with a passion for music and in collaboration with persons and professionals who share these passions, it would be appreciated if music enthusiasts could take the time to attend and experience the concert.

To get to Pahiyangala from Colombo, you must first make your way to Horana and then Bulathsinhala – it is only 5 km from the city.

September 15, 2021 byNews Admin No Comments
We are creatures of habit.

A safe-haven for animals, not so safe anymore

September 30, 2018 bythemorninglk No Comments
Animal SOS Sri Lanka is a UK-registered charity dedicated to rescue, veterinary care, and rehabilitation of animals. They have a sprawling, free-roaming sanctuary for dogs and a secure sanctuary for c