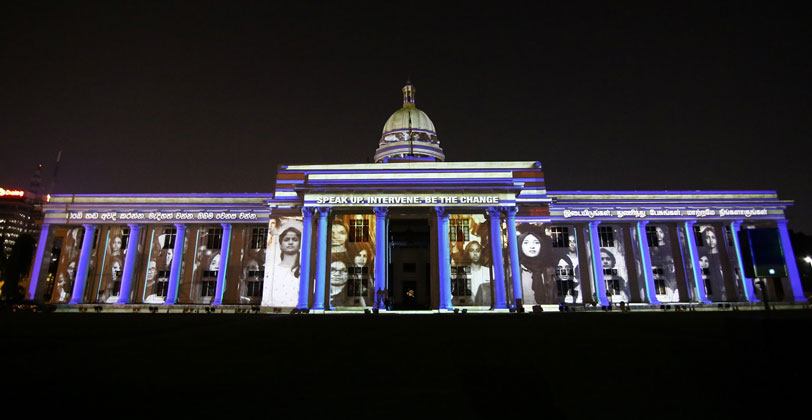 Public transportation is a convenient method set in place to get around with one’s daily activities quite swiftly. As girls, we know this ride sometimes may not be all that swift and comfortable. Sexual harassment, according to the UN, is defined as “unwelcome sexual advances, request for sexual favours, and other verbal or physical conduct of sexual nature”. We have men with their eyes gripped ever so strongly on us, and then we have others who extend to that extra mile through motions such as rubbing, pushing, and leaning. Needless to say, all this fall within the basic definition of sexual harassment, as it is reflective of the intrusion of one’s personal space, thereby inadvertently making it also a violation of human rights.
According to a study carried out by the United Nations Population Fund (UNFPA), around 90% of the female population has had to endure sexual harassment, yet only 4% has gone on record, making it a public peril. Thereby, UNFPA in collaboration with the Colombo Municipal Council, the Ministry of Women and Child Affairs, and the Ministry of Transport and Civil Aviation did just this through the initiation “Does She Travel Safe?” The exhibition took place at Colombo Town Hall Grounds, positioned to address these issues, featuring real stories of women and girls who have faced sexual harassment in public transport in Sri Lanka.

At its opening on Friday, 1 March, Mayor of Colombo Rosy Senanayake noted that women are essentially part of the planning and implementation of development projects to harness a holistic approach towards making Colombo a safer place for men and women. “Sexual harassment in public transport is a priority national issue that needs a continuous policy,” she said.
In the discussion of the varied solutions at hand, UNFPA Representative in Sri Lanka Ritsu Nacken acknowledged the Ministry of Transport’s recent decision to cater to female only compartments in trains. This method which has already been set in place in India, Japan, and other countries exists to generate further awareness to the issue, thus retaining itself as a sustainable solution for the future. She added: “We strive to see a Sri Lanka where women and men can travel together as equals with no sense of intimidation or harassment.”
The dorm-shaped exhibit was scattered with a photo and video collection of the stories of women and girls; a clear indication of the power structures that perpetuate norms and attitudes discriminating women and girls. This exhibition was a product of both the UNFPA Cheer me Up initiative by UK photographer Eliza Hatch and the Rotaract Club of AOD.
The exhibition was open to the public from 2 to 8 March from 8 a.m.-8 p.m., delivering awareness sessions for school students, bus drivers and conductors, and the public on how to speak up, intervene, and be the change.

How is the hospitality industry handling this week?

May 17, 2020 byJennifer Anandanayagam No Comments
Operational Guidelines on Preparedness and Response for Covid-19 Outbreak

January 7, 2021 byJennifer Anandanayagam No Comments
To shed light on the cloud security landscape, experts from Mcafee will be hosting a webinar today (7), from 3-4 p.m. Registration is free, and may be made online.