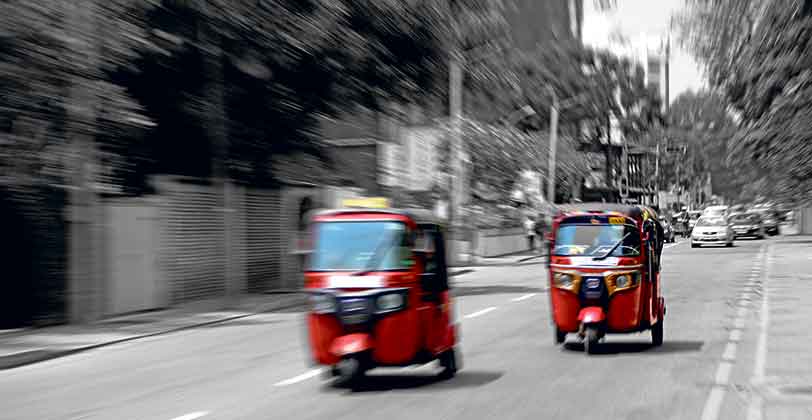 Should we ban tuk tuks?

Tuk tuks play a major role in the functioning of Lankan society. They are an integral part of our socioeconomic culture. Every day, people hail tuk tuks on the road or book one on the multiple mobile applications to get from one point to the other, but yet it is a commonly shared sentiment that tuk tuks are a menace.

Despite the majority of the populace utilising tuk tuks on a daily basis, the urban public abhor the idea of it; in fact, they dislike tuk tuks so much that there are Facebook pages dedicated to railing on the social hazard that is the three-wheeler, and in 2018, the Movement for Enhanced Lifestyle in Colombo started a petition to ban three-wheelers from the city, which has to date received just over 2,000 signatures.

The group cites multiple reasons for their petition, including that tuk tuks are a “menace to the other vehicles as they do not obey any traffic rules”. Although the group does acknowledge that it is a quick way to travel inside the city, they believe that this efficiency is not worth the trouble.

What do the general public want?

Speaking to some members of the public, the sentiment was further resoundingly echoed.

Jayani Perera, a legal officer, said: “They should be made to follow road rules. Tuk Tuk drivers have become a menace because they drive hazardously. It might be good for low-income families, but there needs to be regulation. But even when people try to introduce regulations, the tuk tuk drivers protest and say the Government is encroaching on private businesses.”

Theruni Ranatunga, a law student and human rights activist, shared: “I think there should be cheap rides like tuk tuks, but I think it should be in the form of a government taxi service. I feel this for multiple reasons. The first is that tuk tuk charges aren’t regulated. Because people either manipulate the meters or don’t have meters and ask for whatever they feel like charging; I feel regulations should be passed for the drivers.

“We have seen this being attempted for private bus owners and it was not a huge success, but at least there will be some accountability. Personally, I am all for banning them, but it is an affordable mode of transport; if it is to be banned, maybe the government should invest in a good bus service, i.e. better public transport, which they should manage and develop to a satisfactory level, and only then can we make an outright ban.”

This argument for stringent regulation, its efficiency, and the truth that it is indeed a source of income for low-income families has remained the crux of the debate for many years now.

There are those who vehemently oppose the idea of banning tuk tuks, believing it to be the agenda of those more privileged.

Twitter user Yazdaan, a software engineer, shared that “the only people who want to ban tuks are driving or being driven around in cars. It takes a lot of privilege to say ‘ban all tuks’”.

Setting aside all the arguments, of which some may ring true and carry weight, there are stats which paint a clearer picture.

In August 2014, the Ministry of Transport’s Urban Transport System Development Project for Colombo Metropolitan Region and Suburbs in the Urban Transport Master Plan stated: “In 2013, three-wheeler use was highest among households earning less than Rs. 40,000 a month (14%) in Sri Lanka, lowest among those earning more than Rs. 80,000 (8%). The middle group saw 12% usage.”

In an analysis of the economic and social parameters of the Three-Wheeler Taxi service in Sri Lanka conducted by the University of Moratuwa, it was found that 67% of the drivers had started their careers when they were between 18 and 21 years old. Where they make the assumption that three-wheeler trade is entered into just only three years after leaving school and the survey ﬁndings show their various reasoning behind why they chose to do it – 34% said that they became three-wheel drivers as it was difﬁcult to ﬁnd another job, a further 35% said they considered this as an easy job, and14% stated that they took up driving because the income is good.

What do the tuk drivers have to say?

We spoke to some three-wheeler drivers who shared that while they have various reasons for choosing it as a livelihood, it is mostly because they believe they do not have a better choice.

Pramith, a tuk tuk driver in the Colombo area who is an ex shipping clerk from Doha, Qatar, shared that the only reason he drives a three-wheeler is because he has a family to support. And in Sri Lanka, even with his experience, he is unable to get a job that will give him satisfactory compensation. He said: “People don’t do this as a job, they do this to live.”

We also spoke to Sriyaal, who has been registered with PickMe for over two years now. He said that he wishes he could do something else as there have been some risky situations where he almost met with accidents; driving in the night has been extremely dangerous. However, he said that no other job will provide for his family as this does.

“My wife is about to go into labour next week and soon we will be a family of three that I have to provide for. My wife used to work but when she got pregnant, I made her stay at home. I cannot allow her to work, and so now I have to make sure I provide for them,” he said.

We also caught up with Saranga, another tuk tuk driver who often takes long-distance tours via online transport applications. He shared that it is a highly lucrative business. He added that his wife’s father operates a tuk tuk and earns around Rs. 4,000 a day. He echoed many other tuk tuk owners’ idea that in Sri Lanka, you are not given jobs according to your talents. You must have connections or have gone to prestigious schools to get good appointments.

The fact that low-income families depend on the tuk tuk business to survive is an undeniable truth. However, the fact remains that it has caused many disruptions to the everyday functioning of society.

A study conducted in the Department of Forensic Medicine in the Faculty of Medicine of the University of Peradeniya in 2019 on “medico legal aspects of injuries sustained by occupants of three-wheelers in road traffic crashes” stated that injuries and death due to road traffic accidents (RTA) are a major public health problem in countries like Sri Lanka and that 16% of all vehicles used in the island are three-wheelers.

As for the call for regulation, things remain on the fence.

The authority to regulate three-wheelers in the country is the National Council for Road Safety, which has proposed that a series of driving regulations for three-wheelers be introduced to ensure the safety of the passengers and road users.

In 2013, regulations which restricted three-wheelers from transporting more than three passengers at a time and required making the speedometer and a fare meter mandatory, were gazetted.

In 2017, there were even plans to restrict the import of tuk tuks in a bid to reduce road accidents and congestion. However, despite these initiatives, things have largely remained the same.

Despite the regulations, the sheer number of tuk tuks on the road has made it so that there is no effective way of implementing such strategies. The public continues to experience the many troubles posed by these tuk tuks.

Manula Wijesinghe, a writer and design student, said: “Have you seen the territorial nature of the three-wheeler parks? They do not let anyone from outside enter their turf; it is almost like a gang and they are very hostile towards outsiders. In addition, they never use their meters and instead have fixed prices which are far higher than the normal charges.

“The meters are rigged in some of these three-wheelers. They read far higher calculations than usual. For example, the tuks in front of Majestic City charge Rs. 80 per km when in fact it should be just Rs. 50 or Rs. 60, and they know it is illegal to tamper with these meters.”

An extreme version of the solution can be seen in Egypt where in 2019, the Egyptian Government issued a ban on tuk tuks citing that they are unsafe and unlicensed.

The decision put thousands of drivers at risk of losing their livelihoods, but despite this, Prime Minister Mostafa Madbouly told the Ministry of Finance that tuk tuks should be phased out over the next three years.

The ban comes with an alternative in the form of auto rickshaws, which is said to create job opportunities. However, this microbus is said to be too expensive for the average tuk tuk owner and therefore despite soft loans and other implementations in place, there will be many who cannot afford it.

Despite these concerns, the programme continues to be implemented, and in early September last year, factories were ordered not to produce three-wheeled vehicles.

With Egypt as an example, it is likely that other countries would follow suit in banning tuk tuks in urban congested areas which, as suggested above, will cause economic distress to many families in the country – not only those who earn an income from it, but also the general public who are unable to afford to own vehicles.

It is evident that a strong public transport system together with the stringent implementation of already existing regulations could alleviate some of the pressure to ban tuk tuks. However, such systematic actions are yet to be seen in action.

Our Town – an attempt at Metatheatre