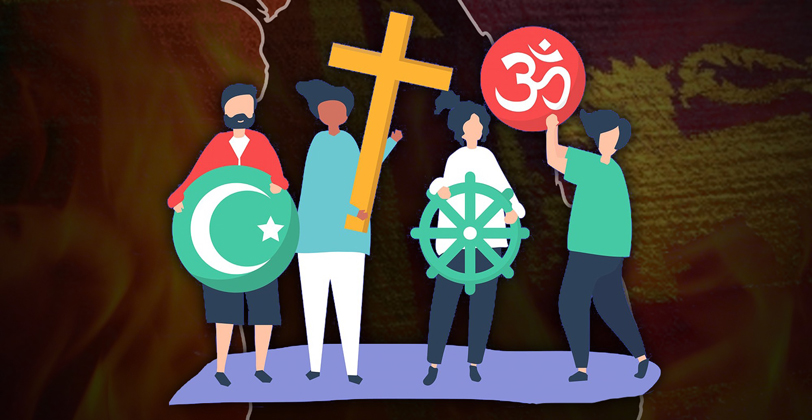 Mother Lanka took a huge blow to her heart when catastrophe hit her shores two weeks ago. On this very same day, all hope seemed lost as countless attacks to religious sites and tourist locations were being reported, with the death toll around the entire island rapidly rising. With curfews being imposed islandwide, fear and sorrow spread throughout our country in a matter of hours.

With the immediate help of forces like the Bomb Disposal Unit, the tri-forces, the Police, etc. during the following days, our country had gone silent once again. Not in peace, but suddenly still. Not too far away was the real judgment which awaited our country. Victims of families who lost their loved ones mourned their loss for the world to hear and children being left abandoned in shock, searching for their absent mothers slowly led our country to an unknown large separation. Sri Lanka fell and it fell together – no one knows when we would rise again.

But when everyone least expected, heroes appeared all around our little island. From the corners of Colombo to Negombo and from Kandy to Galle, Sri Lanka saw people rising up. One by one, people spread one message. Standing hand in hand against the forces of evil that were taking over Sri Lanka, we said NO to evil in words and actions.

This week, The Sunday Morning Brunch looks into groups of people, both organisations and groups of friends, who took a stand to spread kindness amongst Sri Lankans once again.
—————–

Founder of the organisation, Manjith Thananegama spoke about how KindHearted Lankans came to be and the chain reaction of events which influenced them into helping people in need. “We started KindHearted Lankans about four years ago when my wife and I went around on the streets searching for a way to be kind. One day, a video I posted regarding what we did went viral around the country, and more people wanted to join,” he reminisced.

Thananegama shared that Sri Lanka was at peace and tourism was booming, as people were finally getting over the impacts of the civil war. “All of this happened so suddenly and we were also in shock. It took a while to react to this situation.”

Speaking about what they were up to post 21 April, Thananegama said that the main task of the course of action was to visit the National Hospital of Sri Lanka in Colombo. They got in touch with Pushpa Ramyani De Soysa who gave them a list of essentials needed and directed them on what needed to be done. “We then followed up with visits to the churches that were damaged and their villages, which were all very heart-breaking to witness. We have more projects coming up because these people will soon be out of the spotlight, but precautions should be taken for the long term with things such as education and their livelihoods,” he explained.

Commenting on what the country as a whole should be doing with regard to the situation, he said: “The only way to move forward is to show kindness and love. There is no point of people arguing regarding issues they cannot control. Everyone should really step forward at a time like this, because the motive behind these forces of evil is pure division and I think the only way to win the good fight is for all of us to come together.”

For more information call 077 7994477get in touch via help@kindheartedlankans.com
—

Rishinie Fernando, President of the Rotaract Club of Negombo, helped us gain more insight into what they had seen in their journey to offer donations during the past two weeks.
“When I first got involved with Rotaract, I did not really know how it worked. I’ve been involved with this organisation for four years now, and I’m finally starting to understand the width of it and how much is actually involved in it. Rotaract is about everything – like community service, professional development, international service, etc. – with a lot of other aspects linked as well.

“Being a Catholic and being a Rotaractor, the first thing that came to mine as well as all of our minds was how we were going to help. So, before officially launching the campaign, we were already there, helping whoever we could,” Rishinie remarked.

She shared that they were first in contact with the doctors and directors of the hospital who gave them details as to what needs to be done. From there, they got on board to get a fund running and took the cause to social media as well. “We are still having a fund going on to concentrate on educational needs, financial sustainability issues, and counselling, and even as of now, a few of our Rotaractors are getting the necessary training needed for that to happen.”

“Right now, we are working with the grama niladhari officers and local authorities to help overcome the tragedies which already occurred. As the campaign drifted greatly, we thought that, although the emergency is gone, now we need to work on something more revolving around the long-term repercussions which will remain in these places and persons,” she added.

Rotaract Negombo’s main focus at the moment is education and mental health. As each of these survivors has suffered different types of trauma and as it can be different from one another, their long-term plan would now be to work with everyone who had to face this tragedy.

“I think there’s one thing which has not been said fairly; true enough, this was a moment of diversity, true enough, we went through so much, but the support we got from everyone in working towards the betterment of the situation was massive. Every Buddhist, Tamil, Muslim, etc. came together and I think that was one of the best examples of why we will never divide. The donations were massive – even going overboard – and that was truly heart-warming to see was. One of the best things that came out of this movement,” she shared.
For more information, contact Minolie on 077 7162236 or Pradeep on 077 9426101
—

Pastor Moses Akash had to cut his sermon short on 21 at the Bethany Christian Life Centre, Rajagiriya to be rushed home. He recalled the tragic Easter Sunday whilst talking to us.

“Firstly, we decided to visit the victims in Batticaloa and Negombo to provide water and all the necessary items, because that was a time people were crowding at hospitals, hopeless and heartbroken, and with no food or water. Having visited the General Hospital in Negombo and the National Hospital in Colombo, we were able to provide what was needed, like bed sheets and sanitary items, in the hospital directly,” he said.

Pastor Akash shared that they mainly donated to hospitals. “Some of the equipment needed by the Colombo Hospital exceeded Rs. 500,000, which we raised together with the help of friends, families, and volunteers.” He further said that they were currently in the process of raising more cash to buy important equipment for the ICU in the Batticaloa General Hospital.

Voice Foundation is currently a project that involves volunteers from the Bethany Church, with whom they started this initiative. “We have coordinated mainly with Negombo and Batticaloa and in another week or so, when everything slows down, we will be focusing on rebuilding everything that has been lost in this disaster – establishments and people all together.”

Pastor Akash feels that the main concern for us as a country should be to stand with each other, for each other. “This is only a small group of people and not the majority of Sri Lanka who have lashed out into doing these crimes. We are Sri Lankans and we should really stand together at times like this,” he concluded.

Treat your loved ones to a meaningful gift this Valentine’s

February 2, 2019 byJennifer Anandanayagam No Comments
In an effort to equip and empower families to rebuild and restore their lives, World Vision has organised a pop-up sale at The Bayleaf on 9 February,