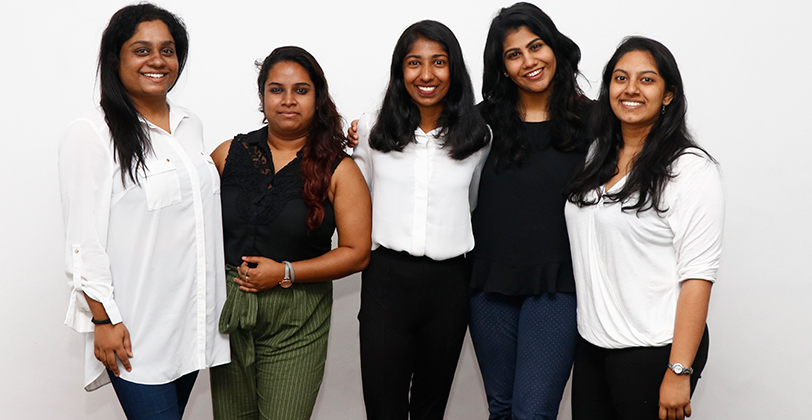 By Dimithri Wijesinghe
—
The Yeheliya Foundation is a non-profit organisation focusing on community development founded by Attorney-at-Law Naushalya Rajapaksha that brings together passionate individuals to work towards finding solutions for the betterment of society as a whole.

“Yeheliya” may be somewhat deceiving as a title as the organisation has ensured that they do not limit themselves in their cause, as they carry out activities for students, youth, and persons from all walks of life, not just women.
The team comprises lawyers and law students who are also part of various civil society organisations working towards the empowerment of many groups of people including women and youth.

The Yeheliya Foundation was handpicked by Transparency International Sri Lanka (TISL) to work with the Open Government Partnership to look into the Convention on the Elimination of all Forms of Discrimination Against Women (CEDAW).

In order to realise the Fourth Milestone of the 12th Commitment under the National Action Plan of the Open Government Partnership Programme, which is to establish a transparent and answerable process to implement selected concluding observations of CEDAW in work plans of related Ministries by 2020, the foundation organised their most recent project, “Crossing Diyawannawa”.

The initiative is an open dialogue to present ideas and strategies to improve female participation in governance and decision-making. The first fold of the project will take place on 25 January 2020 from 2 p.m. to 4 p.m. at the Royal College Union Skills Centre.

The primary focus of the project is to address the lack of women in Parliament, and according to the team, their goal is not to simply get any number of women into Parliament merely to fulfil the one-third quota, but to appoint educated female representatives of a certain calibre with the capacity and experience to best thrive in their posts.

The event will be a trilingual discussion funded by TISL including dialogues with youth civic rights activists, civil society organisations, women in governance, and government stakeholders. This will culminate to a presentation of the findings of the above discussions with the Minister of Women and Child Affairs and the Chairperson of the Election Commission.

The discussion will be centred on encouraging women to partake in the political sphere with the intention of discussing barriers that women face when entering the political world and proposing viable solutions. It is the foundation’s intention to extend pressure and lobby with political parties and government departments to further female representation.

Promodya Dayawansa
A final-year undergraduate at the Faculty of Law of the University of Colombo, she is currently a part of Transparency International. Thereby, she’s able to function as a bridge between the principal funder and the Yeheliya Foundation’s current project, “Crossing Diyawannawa”.With a passion for helping people exercise their human rights, Promodya has been part of many activities that have allowed her to play a role in the larger narrative of societal upliftment, particularly in her role as the Community Service Director of the Rotaract Club of Colombo University and as a member of “Know the Law”.

Chamathka Ratnayake
An LLB graduate and final-year student at Sri Lanka Law College due to take oaths in 2020, she brings with her invaluable insights on intergovernmental collaboration on pressing issues form her time as an intern at the Sri Lankan Mission to the United Nations (UN) in New York.
Chamathka is politically aware and is passionate about raising awareness amongst her peers and youth. “People aren’t politically involved. There are many reasons for this. Many often perceive politics to be corrupt, too corrupt to change, and that they themselves would have to compromise on their ideals in order to be part of it,” she said, adding that while she comes from a background of working towards getting young people interested in politics and this is her first time involved in a project of this nature, she is hopeful that since this is a new approach and given that it is in fact an open dialogue, it will allow persons to share their opinions and may encourage people to be more politically aware.

Narthana Wevita
An LLB graduate and a current student of Sri Lanka Law College, Narthana channels her experience as a debater and mooter in training students in debating and public speaking.
With a passion for lasting social change, she is one of the oldest members of the Yeheliya Foundation, having met Founding Director Naushalya just over a year ago and discovering their shared passion for addressing gaps in society and finding solutions for them.
She shared how Yeheliya is a multifaceted foundation addressing a wide array of societal issues and referred to past projects where they have retained the freedom to address an issue “then and there”.

Tarangee Mutucumarana
A junior defence counsel and a barrister of England and Wales, Tarangee holds a Master of Law from the University of London. She has represented Sri Lanka at several law conferences in Singapore, Malaysia, and Thailand, and a leadership programme at Harvard Law School.
She is also part of multiple other organisations working towards the betterment of society, namely the Arka Initiative conducting SRHR (sexual reproductive health and rights) work in the grassroots on rights, awareness, and sustainable sanitation.
She’s also a part of the HYPE organisation on policy initiatives to ensure policy awareness and the Janapahana Padanama, where they are working towards ensuring that law is a subject taught in schools. They also conduct awareness programmes to teach practical knowledge in law and provide legal aid.

Nimansa Thalduwa
An LLB graduate and current student of Sri Lanka Law College, Nimansa has nurtured a passion for volunteer work and community service since her time in school where she pursued activities such as Model United Nations (MUN) and took part in international mooting competitions.
As a woman in Sri Lanka, she believes in her duty to do something about her situation. He stated that Yeheliya is a fantastic foundation in working towards such goals. “You cannot say that there is nothing that you cannot do; even if one person starts a conversation it is a step in the right direction. Actions have a ripple effect and so you need not feel as though you are helpless. There is always something you can do,” she said, addressing those who believe they are too small of a cog in a bigger machine.
————-
Facebook: YeheliyaFoundation
https://www.facebook.com/YeheliyaFoundation/

A film-like life in the world of film

September 15, 2019 byThe Sunday Morning No Comments
For four days from 4-9 September 2019, the peninsula of Jaffna was under the spotlight on both the local and international stage among significant locations in the country.

April 29, 2019 bythemorninglk No Comments
An overwhelming number of Sri Lankans flocked to the National Blood Bank following a nationwide call for help, requesting blood for the injured.