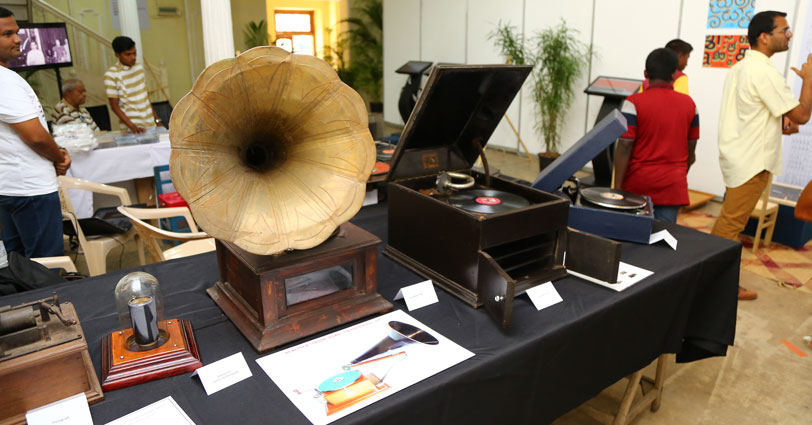 It’s About Time we journeyed through the years

Organised by Historical Dialogue in collaboration with the Ministry of National Integration, “It’s About Time” (1-10 February) was a historical museum – the first of its kind that was open to the public over a period of 10 days, the last of which is today.

The exhibition was conducted in 35 locations, starting with Moratuwa. The main objective of this unique exhibit was to essentially start a conversation about history.
History as a subject is considered a bore, more often than not. This is attributed to the perception that the subject is mundanely limited to a textbook, the very perception the organisers wished to change through their initiative.

The historical museum offered a unique, new, experiential concept to its guests, and it started by questioning one’s specific role in history. The museum was partitioned into many engaging segments and exhibits on varied interests.
In the words of Yohan from Historical Dialogue: “In the design of the museum, we wanted to make it a decompression, something more fun and enjoyable.”

Ape Moratuwa, A Road Show – essentially a walk down memory lane – was the first exhibit one encountered when making their way through the museum.

One section consisted of a display of bricks with important years marked on them.

It further delved into the phenomena of the ever-changing road names, and how they has evolved over the years.

Archive of Memory, curated by Dr. Malathi De Alwis and Hasini Haputhanthri, was a compilation of various stories.

It focused on 70 narrative fragments that offer compelling, personalised perspectives over the past 70 years. The perspectives had a connection to the various objects on display considered sentimental to the storyteller. A tea cup, a grinding stone, and a slate pencil were a few of those objects.
History stops at 1948 for most of us, despite the constitutional change and urban conflict. Nevertheless, this, we thought, was an excellent method of scrutinising certain events in a constructive manner. “People’s stories also matter,” added Yohan.

Another interesting exhibit that focused on sensitive subject matter was Herstories by Radhika Hettiarachchi and Viluthu (Centre for Human Resources Development).

Whilst we witnessed just a few exhibits of the everyday woman who had her story to tell, the project was in fact a compilation of 285 self-narrated stories. As it happens to be a play on the word histories, we were told the lack of emphasis on stories of women in the South, and even Colombo, ignited this idea.

Many ponder the numerous cultures amassed in this island nation. Placing multiculturalism at its apex, we are certainly familiar with some, if not all, of these languages. Scripted was a segment that emphasised this narrative.

The display stressed on the original similarities between that of Sinhalese and Tamil letters that have advanced to their current state.

Making our way through copious exhibits that were all uniquely placed, we came across Musical Memories by Sooriya Records. It was indeed a delight to witness the outstanding evolution of recording instruments through the eyes of Gunapala.

We were intrigued to have learnt from him that the original record was in fact cylindrical in shape as opposed to the flat disk-like shape we associate it with today. “They changed the shape because they believed that sound would be produced better on a flat surface,” said Gunapala.
The evolution from the vintage phonograph, invented by inventor extraordinaire Thomas Alva Edison, to the Walkman took us on a nostalgic stroll down memory lane that rendered nothing but heart-warming sentiments.

We opted to check out a unique segment that caught our eye; the Human Library. We learnt that books were interestingly replaced by people.
It started with the attendees choosing a description of a person out of a list they’re provided at the entrance. They were then allowed to start a conversation with them.

“The different people who are here all have a story to tell, kind of like a book you can borrow. Basically, you need to take the time, ask them questions, and try to find out more about them,” added an event organiser.

Apart from the exhibits, the organisers planned events including a kids’ corner which was conducted throughout the course of the exhibition.
The kids section provided a great opportunity for the little ones to learn of their country’s history. Although this was a relief from the heavy narratives and exhibits that occupied such profound historical significance, the kids were able to keep themselves occupied with simple activities such as drawing and solving puzzles.

Not only did we believe this challenged the creative minds of the youngsters, but also that it further cultivated the ethic of teamwork, which becomes essential later on in their lives.

Exhibits
Memory Walk: The Rise of Capital
Angampora by Oceans and Continents Sri Lanka
Archive of Memory 2018 I Community Memorialisation Project
The Incomplete Thombu by Thamotharampillai Sanathanan
Herstories by Radhika H and Viluthu
Photo booth and games
Discussion Zone I Reading Corner
Our Kitchen Corner by Lanka Decorative Arts
Scripted (with Mooniak)
Java Lane: Vanishing with old Colombo by Abdul-Halik Azeez
I am: Portraits of Sri Lanka’s elders in sound and image by Kannan Arunasalam
Media and Me, A Note to Myself, The Message Tree

June 3, 2020 byJennifer Anandanayagam No Comments
The Bathiya and Santhush (BnS) drive-in concert was held on 30 May and 1 June at the Ratmalana Airport. The show featured guest stars Umaria, Wasthi, and Yohani backed by Infinity.

Honing and honouring the literary talent in Sri Lanka

December 9, 2018 bythemorninglk No Comments
The Fairway National Literary Awards took place on Monday, 3 December at the Galle Face Hotel Jubilee Ballroom amidst much excitement and fanfare.