November 18, 2019 by themorninglk No Comments

Six years is an awfully long time. Within the past six years, Sri Lanka has seen the change of a government, erection of great constructions, and so many other changes that we can barely remember. Throughout all these vast alterations and inconsistencies, there has been one man who, despite rain, sunlight, and darkness, stood at a place and continued to go about his self-given employment.

On 26 February 2013, Nizar Sariffodeen walked to the inconceivably steep bridge over the Hunupitiya Railway Station and began the duties which he saw were necessary but not fulfilled. To get into why Sariffodeen believed his service was necessary, one must understand the truly impossible layout of the bridge. Built unlike the arch-shaped structures commonly found around the country, the Hunupitiya Bridge takes the form of a bottomless trapezium, with two tall sides and a flat top of which the edge can make one believe that it is the tip of the world. Besides this perilous ramp-like structure, the width of the trapezium too is not even the slightest bit close to spacious. Sariffodeen himself said that “even two three-wheelers can’t exchange” within that space. 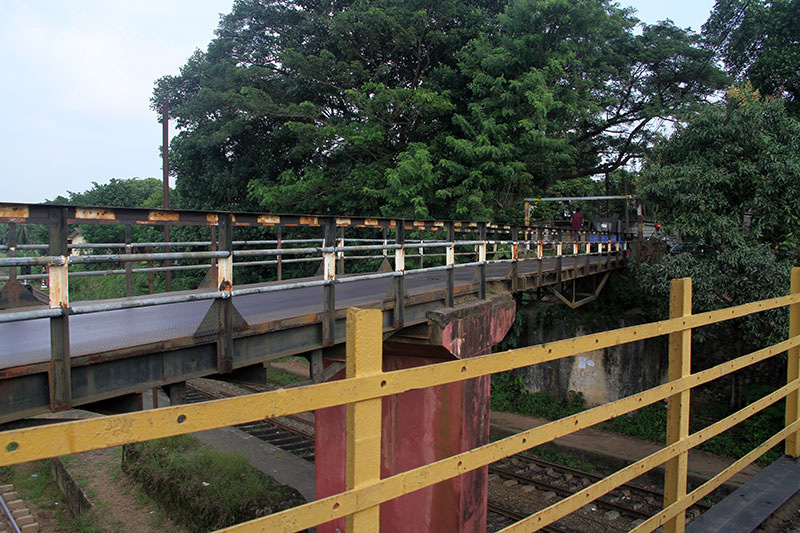 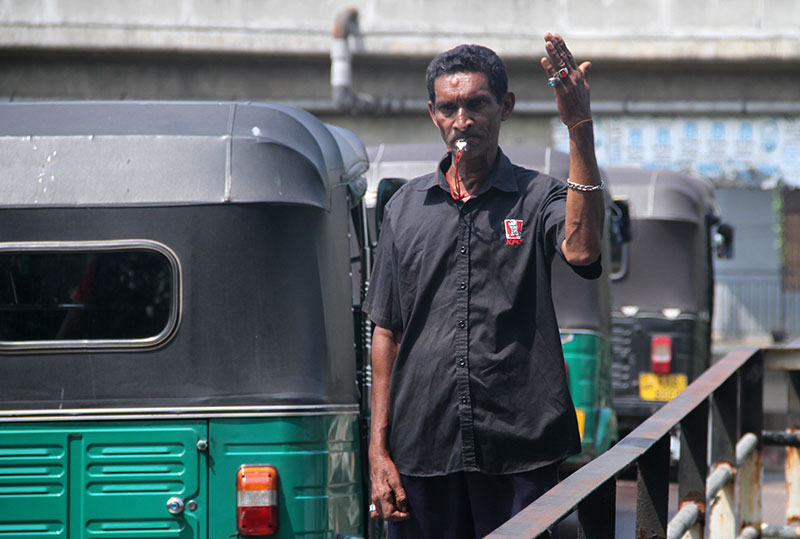 Before 2013, Sariffodeen was unaware of this location until his friend, who saw that he was unemployed and longing to work again, suggested him the idea. This friend was made aware of this productive pastime through the news of one individual who was already involved in controlling traffic over the bridge. However, neither is he a paid worker. He is known to all simply by the name “Farruk” and those residing and working nearby lovingly call him “Uncle Farruk”. According to proprietors of a shop in close proximity, it was he who began doing this a long time ago. Sadly, Farruk couldn’t cope with the sun and it affected his nerves terribly. Hence, the place for another altruistic soul popped up in 2013.

Readily, with a spirit set on helping society, Sariffodeen began controlling traffic on the bridge, which was caused simply because drivers weren’t able to see the other side and they couldn’t turn back when they finally did. Upon observation, Sariffodeen saw that all kinds of vehicles including cars, jeeps, tuks, and motorbikes belonging to all kinds of people crossed over through the bridge and that they did so with utmost difficulty. He even saw how commuters at times got into unnecessary arguments. For example, he narrated a story of a motor bike, in an attempt to overtake a car, hit the car’s side mirror, which then lead to a loud and violent clash between the two parties in the centre of the bridge.

While Farruk was away for about a year six years ago because of his illnesses, Sariffodeen began work, learning the ways of the bridge and how to manipulate it on his own. Soon, he grew accustomed to it and its people grew to him. He too rose as a “saviour” to the travellers of Hunupitiya, one with order, organisation, and strict determination to ensure the protection and efficiency of those on the road. Yes, he not only manages the road traffic, but also makes sure that all vehicles follow the correct safety procedures so as to not hurt anybody else when using the bridge or any road, for that matter. He stops vehicles disobeying these road rules such as those carrying protruding items like ladders or furniture and makes sure that all these items are neatly tucked into the vehicle. 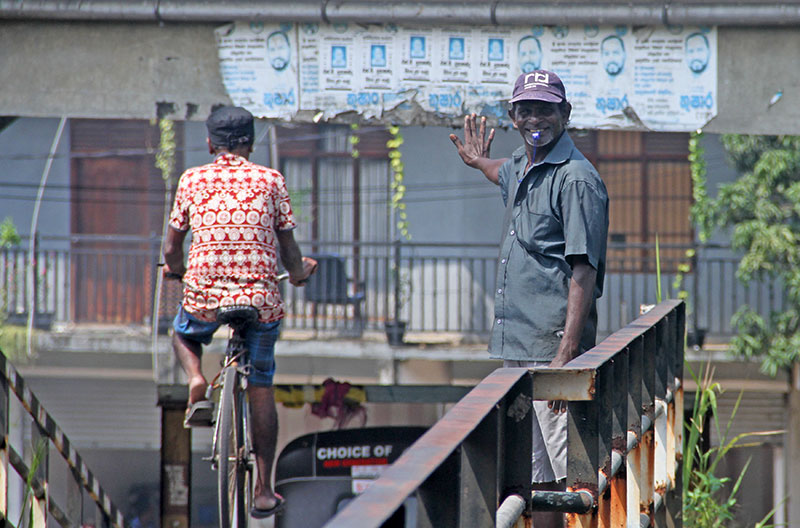 He and Farruk are the mediators of the travellers on the two sides of the bridge and despite not being given a recognised and well-regarded position with a stable income, Sariffodeen claims to be “very happy” and does his work with great energy and enthusiasm. Working ours for him begin at six in the morning, with an hour’s break at three in the afternoon following the terrible school traffic, and end late in the night after dark. Sariffodeen said that sometimes he feels as though he is suffering, mostly because of the scorching sun that befalls the treeless bridge over the railway station. Nevertheless, he is adamant in making sure that people are given the opportunity to go about their daily activities without the unnecessary hassle of getting stuck on a bridge.

The grateful people, seeing that he received nothing for this great service, began tipping him every now and then. However, those around confirm that what he earns is far from enough. What is sadder, underappreciated fact is that he also supports his family with whatever he receives. Although he is a father of three adult sons, it appears that these children do not care for him any longer, leaving him to fend for himself. He lives alone, but he also cares for his sisters and brothers in whichever way possible.

Regardless of their situations, neither he nor Farruk, who is now healthy enough to take up the post three days a week, has ever asked the commuters for a payment. Nevertheless, as Sariffodeen said, he feels very respected when they do pay him or give him gifts and he tries to pay that respect back. He does not ask for money from the Government either. He simply asks for recognition from the town authorities with a minimal wage and a classified position. However, this simple plea has not been heard for the past six years would seemingly continue be unheard. It is not that he and Farruk are unknown; in fact, Sariffodeen said that most of the authorities around know him very well. Once, upon his request, the Secretary of the Kelaniya Municipal Council issued him a letter referring to him as a “Civil Arakshaka Rathavahana Niladhari” (Civil Protection Traffic Official). However, this title is nothing but unofficial words which have little legal meaning. 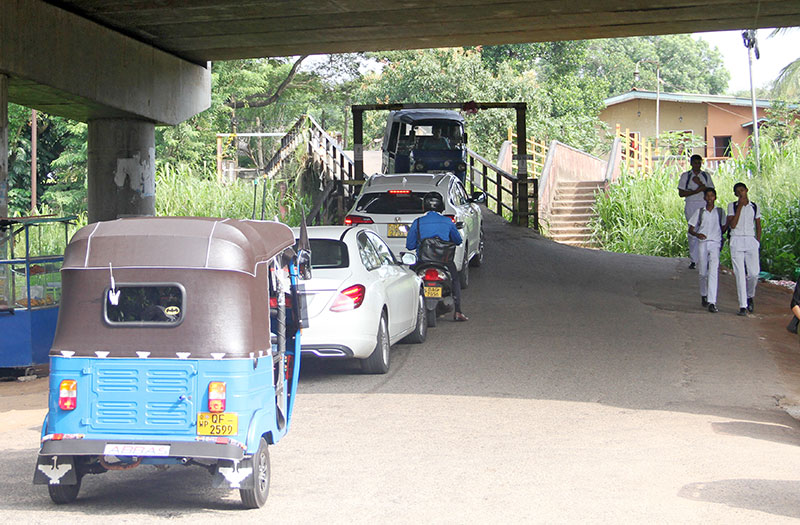 One could point out, of course, that there is no need for any such action to be taken or special fee to be given to Sariffodeen and Farruk, arguing that the two willingly chose to continue in this work by their own personal account and not as a result of a job offer put forward by any government body. While this is completely true, a humanitarian or anyone with a compassionate heart would simply say that the request is not large in the least, why not just meet it.

Their humble request isn’t one so great that could create a massive uproar and backlash from the masses, but it can most certainly provide food for thought to those governing us and urge them to at least take notice of people such as these two men who whole-heartedly serve the state and its people.

Our favourite looks from the CFDA Awards 2019

June 24, 2019 bythemorninglk No Comments
An annual event celebrating the strides and highs of the fashion industry, the CFDA Awards – a.k.a. the Oscars of the fashion world – brings together some of the fiercest outfits, outside the Met Gala