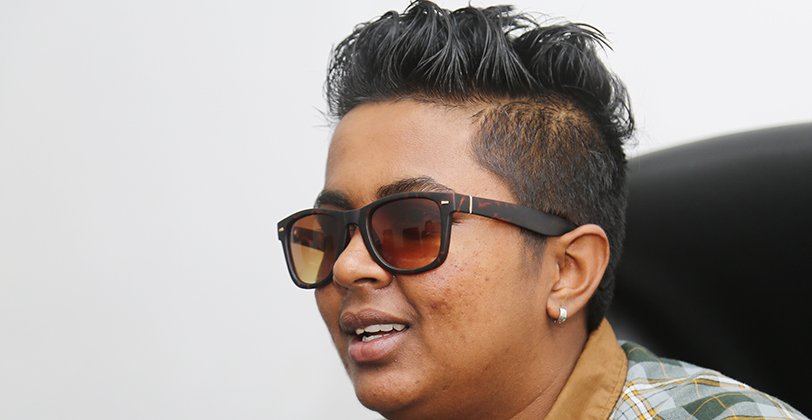 Having schooled at a convent, Thashi Jayaweera’s personal traits were questioned not only at her school, but also by the people in her village and her extended family. Recalling a particularly difficult period of her life, Jayaweera informed that everyone looked at her as if she was a result of “black magic”.

“From the time I remember, I always was a tomboy, and I would always wear a shirt and jeans or shirts and shorts. 2008 was a difficult year for me. I was questioned by the headmistress of my school, my extended family, and the people from the village on my behaviour and the way I dressed. My parents started to constantly tell me that people were gossiping about me and that I should change my way of dressing.”

Jayaweera did not heed their concerns and was brave enough to embrace her true identity. Whenever people bothered to come and talk to her, she said that she would spare some time to sit and have an open conversation with them to explain who she was.

The youngest child of a pop artist of the 80s, Jayaweera was exposed to music from a younger age, and taking the lead from her father, she too decided to become a musician.

“I entered the music industry in 2012 with my first song ‘Dana Denath’, which was well received on mainstream media and online platforms. However, in one of the media interviews, I stated my sexual orientation and after that I realised that my popularity had dropped. I noticed the impact when I released my second single this year – the song did not reach a big audience as compared to the first song.”

When listening to both her songs, we gathered Jayaweera does not at any point indicate that the song is about a same-sex relationship. She informed that the song is written with the universal feeling of love, being in a relationship, and breaking up with that significant other.

“It is disheartening to know that the public could see my sexual orientation and my music going hand in hand. It is two different things. Come to think of it, it seems like society is yet to accept the LGBTQIA community and are still reluctant to give a chance to musicians from the community to make their mark.”

Jayaweera is of the opinion that mainstream media channels should have programmes to showcase talent from the LGBTQIA community as there are many talented individuals in music, dance, theatre, and art. “Sufficient dialogue needs to be created around the community and the easiest way to do it is through TV, radio, and online channels where talent is showcased and where one can also speak about the issues they are facing. While there are annual shows organised by the community, at present, even those shows are only open to the LGBTQIA community and their close allies.”

Society still believes that if a woman speaks out about her sexuality, it should not be given much publicity – this is why lesbians are reluctant to speak out. We inquired from Jayaweera whether she thought about the consequences when she publicly revealed her sexual orientation.

“I’ve always been open about my sexual identity and am always truthful to everyone; it has eased me into various situations. People might get offended by my personality, but I do not bother much about what people think of me. I am proud of whom I am, and if I have to make a stand as a lesbian musician, I would gladly do so.”

Jayaweera believes that support groups for lesbians are far less in comparison to gay and transgender persons, which also results in many such persons wanting to remain hidden from society. “With increased awareness about transgender and gay persons in mainstream media and such personalities constantly appearing on TV shows, society is aware about their existence.

“Hopefully through my music and with my advocacy, I would be able to create awareness about lesbians in our community.”

Ending our conversation, Jayaweera added that the LGBTQIA community should be more open about their gender identity and sexual orientation so that a continuous dialogue is maintained between the community and the general public. She believes that it would immensely support the future generations in securing their place in the society and increase their chances of being accepted.

October 20, 2021 byNews Admin No Comments
Climate change is one of the most pressing issues affecting young people today, and the youth are among the most vulnerable groups to the impacts of climate change, particularly in developing countrie