Golden Needle, a long-standing boutique store known for its handpicked exclusive womenswear items primarily from India and Pakistan, held its first “open house” last Sunday, 27 January as they celebrated a new collection of clothing and jewellery at their brand new boutique location. 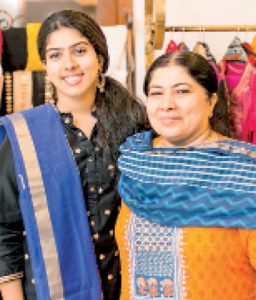 Now situated on Skelton Road, Colombo, the quaint little store is a family-run business owned by Hwwa Kareem Yaseen and her family.

Coming from a humble beginning, the boutique first opened as a small tailoring operation for friends and family in the late 80s.

We spoke to Not Your Nangi initiative – a movement aimed at empowering women – Founder Nabeela Yaseen, who is Hwwa Kareem Yaseen’s daughter and the brainchild behind the newly-introduced jewellery line at the Golden Needle. Nabeela said: “We take pride in not stocking multiple pieces of each design to maintain exclusivity,” adding that this exclusivity is what has given way to their business’ longevity.

The business, which was officially registered in 1995, holds not only exclusive pieces imported from abroad, but also an in-house manufactured variety of items with many ready-to-wear designs by Kareem Yaseen, who has done multiple fashion shows with Golden Needle since it was registered as a label.

The boutique, while primarily focused on womenswear, is not exclusively so. It features the men’s linen shirt line “Mosh”, courtesy of Nabeela’s brother. Speaking about her brother’s involvement in the industry in launching his own line and about joining the family business, she said: “I would say my brother’s shirt line is something that was directly influenced by my mom. We’ve grown up with Golden Needle around us, and the garment industry is not new to us. At the time my brother started Mosh, my dad was in to the textile industry. So, these really did influence him to put it all together.” 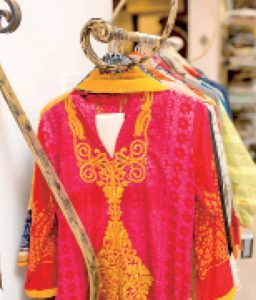 As for Nabeela’s contribution to Golden Needle with her freshly-launched jewellery line “Stoned”, she said: “In terms of my jewellery line, it was not something I always had in mind, but I have always watched my mother accessorise herself with nice, timeless pieces of silver and fine jewellery. So that, along with my husband who’s in the gem trade, gave me an exposure into the world of jewellery and I started Stoned to complement our boutique’s selection.”

The jewellery line features pieces made using 925 silver, commonly known as sterling silver, with all natural gem stones. Nabeela has tied up with silver smiths in Sri Lanka who make handmade jewellery to put together gorgeous artisan jewellery; pieces that feel as though they are timeless classics. Speaking about her new line, she said: “Eventually, I do intend on designing my own. I am actually quite intrigued by the endless possibilities of designing jewellery!”

Finally, discussing about the future of her jewellery line, the Golden Needle itself and the possibility of its expansion, she expressed: “Expansion is the plan for life! Golden Needle started out as something really small at my granddad’s house, but we’ve only kept progressing. My mom is a go-getter and I know she won’t just stop, and her goal is only to keep going bigger and better!”

January 26, 2020 bythemorninglk No Comments
Did you know that there are Sharks in Sri Lankan waters?

February 8, 2021 byNews Admin No Comments
When we hear the words palliative care, we often think of someone with a terminal illness or last stages of life being made comfortable in their last days. The images conjured are those of quiet..