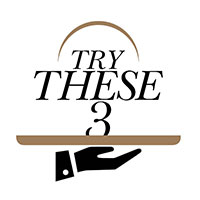 Hello readers. This week on Try these three… we bring to you Tosakanth’s Roast Paan, which is situated down De Fonseka Avenue in Thimbirigasyaya.

Tosakanth’s Roast Paan is a small dream that came true for Tashya De Silva, the founder and the sole employee at the café. Tosakanth’s was initiated by Tashya AKA Tosakanth, as a mode of earning few extra bucks apart from her day job. It soon became a passion, especially since her family was in the bakery business for almost 70 years in Sri Lanka. Tosakanth’s Roast Paan kick-started from small stalls at street food festivals back in February, 2015 and because of the growing demand, Tashya is sharing the café space with her sister; the founder of Sugar Shack ever since last year.

All the Roast Paans at the café are baked daily in a traditional old school wood fired oven at Hasthigiri Bakery in Dam Street, which was founded by Tosakanth’s grandfather. She likes to portray Toaskanth’s Roast Paan as a vertical integration of the family business, which attracts the younger generation towards roast paan while maintaining the quality.

Another specialty at Tosakanth’s is Tashya operating alone at the café, because she likes her products to be of a uniform quality. She emphasised that she wants to serve her customers what she would like to receive and that she wants the customer service and the food to be perfect at all times.

Currently, Tosakanth’s Roast Paan has a good demand and the outlet runs out of goodies at around 5.30 p.m. every day. She does corporate orders and delivers via Uber Eats as well. According to Tashya, Tosakanth’s has benefited a lot by Uber Eats, because people now tend to buy roast paan at all times without just dropping in at the outlet, because it is a perfect snack. While we were there we observed that Tosakanth’s has a good loyal customer base, because a few regular customers dropped in for roast paan takeaways.

The menu at Tosakanth’s consists of about eight sandwich varieties, coffee, tea and few cold beverages. Tashya makes sure to add a fusion of Sri Lanka in order to provide the younger generation with something new other than the everyday sandwich fillings that they come across, by combining a few daring mixtures together. 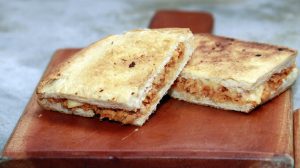 We decided to go ahead with the most popular, yet the most basic sandwich at Tosakanth’s, the pol sambol and cheese sandwich which comes with half a roast paan, slice of cheese and a plenty of pol Sambol stuffed inside. The roast paan, since it was baked in a wooden oven the bread has a very unique flavour and texture to it. When we took the first bite itself, we could tell that it was fresh roast paan, because of the crunchy exterior and the soft interior. The bread made the “krr” sound when we bit into it because it was so fresh. The cheese was grilled and melted on to the pol sambol filling inside which was oozing of the herbs and spices. The sambol was filled with flavour and we loved it. 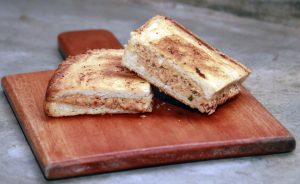 Added onto the menu as a Christmas special by Tashya once upon a time, this has secured a permanent spot in the menu, between the chilli chicken sandwiches to be the second most demanded Sandwich at Tosakanth’s. Tashya has added a bit of adventure to the sandwich by mixing cranberry sauce to small pieces of chicken prepared with a lot of Sri Lankan spices according to the Cajun style, which indeed makes an excellent combination because the savoury and sweet flavours are balanced perfectly in one Sandwich. The filling was quite generous yet again and filled with flavour, which intensified with every bite, we took. 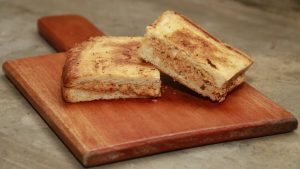 This sandwich came with a generous amount of seeni sambol, a Sri Lankan dish prepared with tempered onions, various spices and half an egg inside it. It was spicy, but ironically slightly sweet as well. Yet again it was full of flavour and as usual seeni sambol was a striking companion with the fresh roast paan and every bite of it was quite delicious! 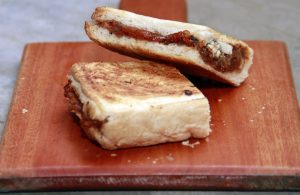 We decided to go ahead with a fourth option as well to try a different and uncommon filling with Roast Paan, so the chilli chicken filling. It is a paste made by Tashya with finely minced chicken and sauces with red chilli. It wasn’t a very spicy filling and had a slight touch of sweetness to it, which was enjoyable. The filling was very generous. In fact there was so much filling all the sandwiches were oozing of flavour filled goodness!

Quality and the quantity of the food, service and the atmosphere of the cafe justifies the prices.
A person can afford a hearty and filling meal at Rs. 500 in hand.

There is ample parking space and washroom facilities.

Tashya has done an amazing job with Tosakanth’s Roast Paan so far! She has our heartiest wishes to expand her venture and live her dream!

Accountability and transparency in fundraising: Lessons from #IshiniGate

November 29, 2020 byJennifer Anandanayagam No Comments
The Lankan Twitter sphere, along with all other social media platforms, has been ablaze with the ongoing controversy that has now come to be known as #IshiniGate.