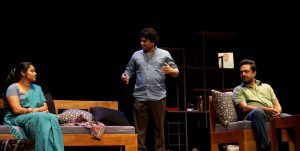 Freedom Theatre Group presented “Hithala Gaththu Theeranayak (A Well-Made Decision)” directed by Rajitha Dissanayake – an exhilarating theatrical experience for the new ages, which was showcased on 19 and 20 January at the Lionel Wendt Art Centre.

The crux of the play deals with how people fall in and out of love, and how love may be different things to individual partners in relationships; on its complexity and how love should not be the basis of most decisions we make in life. This story drives attention to a hot topic in Sri Lankan society: divorce.

Commenting on the theme of the play, Director Dissanayake stated: “When dealing with the issues of the society, we are often presented with various challenging situations, especially with regard to the relationships we have. Most of these situations are beyond our control, and this is what I wanted to bring out from this play.”

Further commenting on the ending, he said: “It is an indecisive one and I think this is important, because such is the nature of life and all the issues we face. So, I wanted the audience to think, process what happened, and what may happen.” 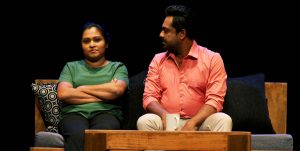 The narrative is framed around a Sri Lankan middle-aged married couple, played by veteran actors of the stage and screen Shyam Fernando and Samadhi Laksiri. The husband develops what he innocently declares to be a true feeling of love for a young colleague at work, and this “unfaithfulness” is discovered by his wife; this leads to the breakdown of their love and trust, and leads to a series of decisions that changes the course of their lives as a family as well as individuals.

With a minimalistic and realistic stagecraft, the play had an engaging style which is quite characteristic to Dissanayake. The principal settings of the play include the household that falls apart and the train station, rather symbolising the permanence of our decisions and the never-ending journey of our lives.

The employment of slow and monotonous music in between the scenes helped bring out the burning emotions within the characters and added colour to the plot. 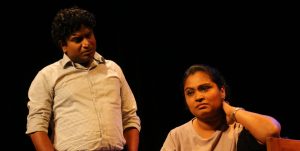 With five key actors, this play tells an unequivocal story. Besides the two key characters, the supporting performances strongly portrayed the subject matter. Veteran actor Dharmapriya Dias played a key supporting role while being the major comic relief in a story with a rather serious tone; his character was used as juxtaposition against the main character.

The performances were memorable as they were handled by a set of obviously gifted thespians. However, Dharmapriya Dias was clearly the star of the play. It is safe to say that he managed to steal every scene and reach a new level of excellence with this performance; it was effortless, natural, and absolutely fascinating. 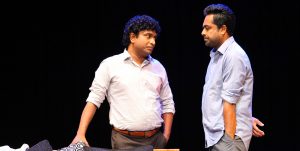 While managing to convey its message loud and clear, “A Well-Made Decision” managed to evoke emotions from the audience members, towards the conflicts of the main characters, the uncertainty of their fates, and the irreversibility of their decisions.

The audience was very pleased with the performance, and the actors received a few standing ovations as well. Most audience members were moved by the subtle humour employed by Dissanayake.

LBTQ women: The added burden of being women in a patriarchal country

December 13, 2020 byNethmi Liyanapathirana No Comments
Sri Lanka’s relationship with women is complicated. Yes, we were the first country in the world to elect a female Prime Minister over 60 years ago, but despite this, we still have a long way to go.

The Ministry Of Crab experience journeys to Europe

April 18, 2019 byRandev No Comments
Taking the Ministry Of Crab experience to Europe for the first time, Asia’s 50 Best Restaurant conducted a five-day pop-up at the Shangri-La Hotel, Paris from 9-13 of April 2019.