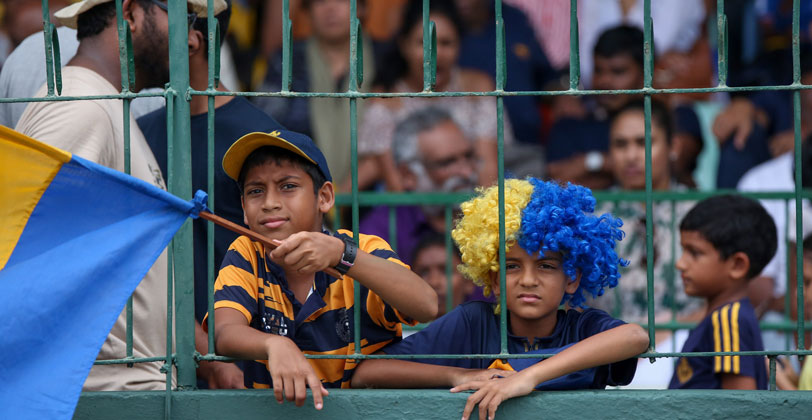 What’s the story behind the tents?

Great feats have been performed on the field, but memories are made all around it.

The Royal Thomian Big Match is possibly the most anticipated event of the year in the Sri Lankan school calendar, looked forward to by both young and old, male and female, and even those who have no connection to either school.

It is the second-longest uninterrupted cricket match series in the world, and it is the only schoolboy cricket match in Sri Lanka to be played over three days.

For a nation that lives and breathes cricket and worships its heroes, it comes as no surprise that Big Match season unleashes unmitigated levels of frenzy unto Colombo’s streets.

In all this, the Roy-Tho has come to represent far more than just a schoolboys’ cricket encounter – from the infallible excitement of those attending the match for the very first time, feeling in their bones that they’re about to witness something special, to the seasoned veterans returning year after year to feel the height of comradery and to take with them alcohol-induced hazy memories of the greatest times of their lives.

Most of this togetherness and the “living of the best life” take place in the infamous tents. Many have heard these names in passing – Mustangs, Colts, Stallions, Thoroughbreds, Stables, and all sorts of others – but for an outsider looking in, they remain a mystery and to be frank, make up part of the allure and feeling of mystery that surround the exclusive boys’ club aspect of the event.

While the mystery adds to it all, there’s no harm in taking a quick dive into the past and an insightful look into the walls, tarps, and pillars that lay witness to all this sporting solidarity.

Mustangs is the oldest tent at Roy-Tho, celebrating 101 years. It’s where all the distinguished gentlemen gather to enjoy the sporting event they’ve most likely witnessed for more years than many of us have been alive.

A mustang is defined as a wild, unruly, and masterless horse, a meaning, it would seem, that has resonated with the founders of the tent, to take the liberty for some horseplay in their old age.

Only elders are qualified to enrol in the Mustangs tent, which emanates a grandiose nature from deep within as it hosts all the high-flyers, senior old boys of Royal and S. Thomas’, making the tent very exclusive. One needs to be invited to be part of the Mustangs, which also has the custom, on the second day of the match, to invite the Governor, who invariably comes to watch the match and have a cup of tea at tent.

Started in 2011 by the Thomian class of ’87, Brumbies is a family tent with a friendly mix of youth and adults.

Equipped with their very own DJ, eight-piece papare band, and all the modern “necessary” amenities of a Big Match tent, the Brumbies seats hold around 275 at capacity.

Brumbies came to be way back in 2010 when the ‘87 batch was invited as sponsors, to sit together as one batch for the first time at the sponsors’ tent. The following year, as they were unable to accommodate the entire batch, Brumbies was born.

Over the years, families have begun to join and while it is predominantly a Thomian tent, there are a number of Royalists as well.

Brumbies, with their elevated location, are the first to have started dance nights inside a tent, something that has caught on since they did.

As the oldest tents at Roy-Tho – Mustangs, Colts, and Stallions – are for boys, leaving their wives, girlfriends, and family with no place to hang out, the Thomian class of ‘79 decided to include a tent where they could seat their families.

He stated that while it was originally started by Thomians, there’s a majority of Royalists occupying it at present. He said: “You can gallop all over the stadium but eventually, all the boys come home to the Stables.”

The Royal-Thomian Colts tent was founded in 1975 by a group of young Royalists and Thomians. It is now – 45 years on – one of the most vibrant fixtures at the Big Match. The Colts has become synonymous with uninhibited revelry and merriment, experienced in the secure confines of a member’s tent.

The tent, however, signifies more than fun: It is a vibrant affirmation of the friendly rivalry, deep respect, and camaraderie that characterise the Big Match and the two schools.

We spoke to Colts committee member Shamindra who said that while the spirit of the Colts has not changed, the tent itself has constantly evolved. From its beginnings at a small enclosure at the Oval, the tent now accommodates 500 young Royalists and Thomians.

Memberships are carefully vetted by a committee to ensure a gathering of the like-minded. Entertainment is provided by a house band, a papare band, and a DJ, with popular artistes making guest appearances as well. The tent is now air-conditioned and a number of support staff including helpers assist in making the experience as comfortable as possible.

He said that despite these changes, the core of the Colts is in its roots: A mutual celebration of the permanent fraternal ties that bind Royal College, Colombo and S. Thomas’ College, Mt. Lavinia.

Once you’ve aged out of Colts, natural progression dictates that your next stop is the Stallions. The tent was started in the mid-90s by the same group that started Colts – six Thomians and six Royalists.

Stallions has an age requirement of over 40, and essentially came up to facilitate those who were coming out of Colts but weren’t quite ready for the Mustangs.

Chris Parakrama spoke of the camaraderie between the Royalists and the Thominas within the tents, and joked: “We have this thing we say in the club: ‘Colts is the arrival lounge, Stallions is the business executive lounge, and Mustangs is the departure lounge’, if you know what I mean.”

The committee at Stallions functions in such a way that they have no permanent president, and instead have all general secretaries and appoint a president for each individual meeting.

Currently hosting a total of 450 seats – 225 for each school – you absolutely must be recommended by a member to be eligible to purchase a ticket.

We spoke to Indika Desilva, the immediate class president of the Royal College batch of ‘91 responsible for the formation of the exclusive group tent Broncos.

According to DeSilva, Broncos is the second tent to come up as an exclusive tent for a single batch, and it initially started off as a space from the HSSBC pavilion. Upon making a request for their own space from the Royal Thomian committee, they received their own space in 2007 and started with the tagline: “Simply the Best”, which then later in 2015 was renamed Broncos.

DeSilva stated that Broncos was the first tent to bring down professional cheerleaders from Europe, but stated that this year, however, the practice has been banned. Broncos have contributed largely to the glamour of Roy-Tho as they brought down such professional acts, foreign DJs and also their wall-to-wall sophisticated sounds system.

DeSilva made it a point to thank Hiran, Bimalka, Niroshan, Shavindra, Sashindra, Manuja, BK Priyantha, Ravi, and also the governors and the committee of the group of ‘91 as Broncos’ board bears the brunt of costs for the lavish undertakings within the tent.

This is the second oldest tent at the big match, with a capacity of 590 seats that hosts people of all ages, including children and families. The tent is located at the SLC grand stand upper-floor, and the tickets can only be purchased by members.

The OTSC started in 1956 to assist college aquatics, and today it has a fully-operational clubhouse in Mount Lavinia with over 750 ordinary, associate, and life members with a pool, grounds, and gymnasium facilities offered to them.

Managed by the executive committee of the club headed by Umega Seneviratne, the tent is one of the largest ones in the stadium and is considered a family tent inclusive of live music and even featuring guest artist performances.

Celebrating 10 years, Thoroughbreds started as an option for those over 40 to enjoy the match after leaving Colts. Over the years, it has been difficult to get into Stallions, and while this tent is in no means in competition with the other tents, it also provides a space for those over 40, and does not have an upper-limit on age.

Jehan CanagaRetna, one of the co-presidents of the club, together with Amal De Mel, the Thomian half of the duo, he said that Thoroughbreds are the pioneers of many of the entertainment elements you see at the match, like bringing in Bollywood dancing and providing alcohol FOC. They also have a sushi bar inside the tent. To be a part of the tent, you must be nominated by a member.

The 140th Battle of the Blues – Royal Thomian Cricket Encounter 2019 will take place next weekend (7-9 March) at the SSC. The Sunday Morning is the official print media partner this year.

A 140-year tradition, much like most sporting events, the Big Match brings people together. It’s never been about victory or loss and through centuries of runs scored and wickets lost, Royalists and Thomians have taken it all in their stride.

Three days and the love of the game bring people together; Royalists, Thomians and whoever else, melting away everything else, any and all differences paling into oblivion.

Some may think that people adopt an undeserved sentimental opinion about big matches, but it’s difficult not to be romantic about encounters of the heart. Sri Lankans are brought up with values of cricket and family, and the Roy-Tho embodies the very soul of both of these things.

The Big Match season is the perfect time to remember that life is made for living, and it’s our job to celebrate every moment.

Schools are open again: What happens to digital learning now?

January 18, 2022 byNews Admin No Comments
We all know that schools have opened again. The parents among us are likely heaving sighs of relief. The childless among us have probably returned to cursing school traffic. But the reopening of schoo

February 12, 2019 bythemorninglk No Comments
The fashion industry is often known for its ingenuity and creativity; a force that’s embedded deeply in the cultural roots of our societies.