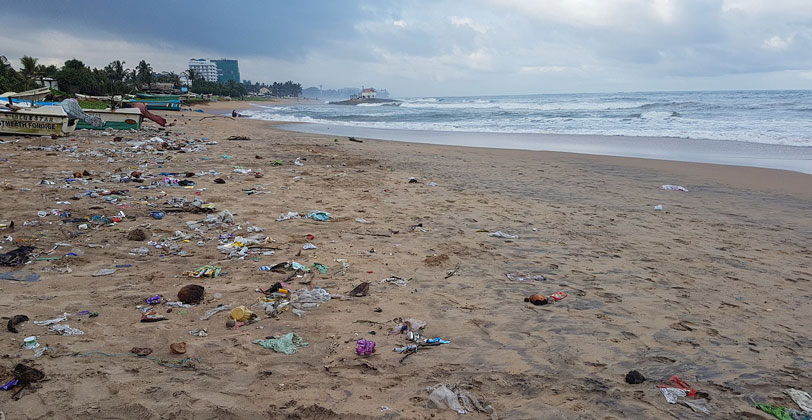 Beach cleanups – are they good enough in the long term?

With many social media trends supporting and promoting the limited use of plastics, we thought we would approach this topic with a positive outlook. Beach clean-ups are one of the most popular activities adopted by volunteer groups that include university and school students, various NGOs, activist groups, and even embassies. The latest trend is to do what you can to help clean the environment.

The United Nations Environment Assembly met this year from 11-15 March. Ministers of the Environment from 193 countries gathered in Nairobi, Kenya, for the fourth meeting of the United Nations Environment Assembly (UNEA) with the potential to propel our society into a new era of sustainability. Sri Lanka is also a member of this assembly and our President attended the conference as a special guest. This year’s theme is “Innovative solutions for environmental challenges and sustainable consumption and production”, with particular emphases on the fight against plastic pollution.

A wholesome viral challenge is taking over the internet, finally! The #trashtag challenge inspired people to go to locations covered in garbage, pick up the trash, and post before and after pictures on social media. The challenge became popular after a Reddit post that challenged individuals to “make the world a better place”. But the idea first started in 2015 when an outdoor clothing company launched the #TrashTag Project. Like the Ice Bucket Challenge that raised $ 115 million for the ALS Association, #trashtag could be a rare social media challenge that makes the world a better place.

“So far, there are more than 26,000-plus posts tagged on Instagram and countless volunteers have cleaned up parks, roads, and beaches around the world. One group picked up bottle caps, straws, and balloons from a beach in California, while another collected plastic thrown out by local people in Junagadh, India,” reported CNN. This trend is now picking up in Sri Lanka as well, mostly among foreigners, according to the pictures posted on Instagram. It surely won’t be long till the locals pick it up too.

The #trashtag challenge has been raising awareness about litter pollution and the scale of ocean plastic pollution as well. Over 150 million tons of plastic are in our oceans, according to a World Economic Forum paper from 2016, and a 2018 UK Government report warned that the amount of plastic polluting the world’s oceans was expected to triple between 2015 and 2025.

Single-use plastics – the bane of our existence

“Break Free From Plastic” is a global movement to stop plastic pollution for good. They report certain multinational companies as the most frequently identified in 239 clean-ups and brand audits spanning 42 countries and six continents. Over 187,000 pieces of plastic trash were audited, identifying thousands of brands whose packaging relies on single-use plastics that pollute our oceans and waterways globally. This brand audit effort is the most comprehensive snapshot of the worst plastic polluting companies around the world.

They also offer a manual to successfully conduct a brand audit in your chosen area as well, something Sri Lanka must look into doing soon.

The audits, led by Break Free From Plastic member organisations, found overall that polystyrene, which is not recyclable in most locations, was the most common type of plastic found, followed closely by PET, a material used in bottles, containers, and other packaging.

“By continuing to churn out problematic and unrecyclable throwaway plastic packaging for their products, these companies are guilty of trashing the planet on a massive scale. It’s time they own up and stop shifting the blame to citizens for their wasteful and polluting products.”

What did you do to save our planet?

We spoke to Gudppl.com Founder and CEO Harinda Fonseka, who runs a platform that connects volunteers with causes. “Through gudppl.com and the mobile app, we have helped organisations with finding volunteers and in a few instances, have helped them connect with key stakeholders and coordinated beach clean-ups. We have supported several beach clean-ups over the last two years.”

We asked him if these clean-ups help, to which he responded: “Yes, of course they help in the immediate term. However, clean-ups are just a drop in the ocean in the grand scheme of things. For starters, the obvious thing is the beach gets cleaned up. As a consequence of participating in a beach clean, volunteers usually take steps in their own lives to reduce using plastic and start recycling. Also, when other beach-goers witness these activities, they are reminded of their civic duties to become more active citizens and sometimes, they too get involved.

“Even though one could hope that these small steps will compound into massive results and eventually save the oceans, I think we need to take bigger and bolder steps before it’s too late.”

Organised by the United Nations (UN) and held in June 2017, the Ocean Conference factsheet revealed: “Nearly 2.4 billion people (about 40% of the world’s population) live within 100 km (60 miles) of a coast.”

A healthy ocean is essential for us, so every meaningful step we take to keep our oceans alive and thriving is crucial – no matter how small it may seem.

We asked Fernando about the long-term solutions to keeping our beaches clean and minimise plastic usage, to which he responded: “The UN Ocean Conference factsheet reveals some daunting information: ‘More than eight million tons of plastic enter the oceans each year, equal to dumping a garbage truck of plastic every minute. As much as 80% of all litter in our oceans is made of plastic. In many parts of the world, (urban) sewage flows untreated, or under-treated, into the ocean. According to some estimates, at the rate we are dumping items such as plastic bottles, bags and cups after a single use, by 2050, oceans will carry more plastic mass than fish, and an estimated 99% of seabirds will have ingested plastic.’

“As you can see, the challenges we are facing are complex, diverse, and almost insurmountable. So we all need to collectively start working together to address this head on. Our solutions need to complement each other’s work to minimise any waste and negative impacts.

“We need to stop plastic and garbage going to our oceans through waterways while removing non-biodegradable garbage from the ocean and beaches. Also, we need to reduce packaging and when possible, stop it at the source.

“This means we need the big consumer goods companies genuinely trying to improve their processes and packaging. Maybe they can invest some of the millions and billions they have towards sustainable packaging. This also means the shareholders of these public companies need to care more about our planet.

“The media needs to celebrate people and the organisations that are taking bold steps to save our oceans. These will be our greatest challenges for the next two decades. The question is, will you be proud of the answer you give when your child or grandchild asks you what you did to save our planet?”

Beach clean-ups coming up in the month of March

Fighting for Trash Free Seas!
Join hands with House of Hope and Chibby’s Friends to clean the Coastal Stretch behind the Dehiwala Railway Station. On Saturday, 30 March 2019 from 4 p.m.-6 p.m. at the Dehiwala Beach. (FB event link: https://www.facebook.com/events/976243442565526/)

Beach and Underwater Clean-up
Goal: Clean the Polhena-Madiha coastal belt and the streets of all plastic, polythene, metal cans, and all other man-made garbage and segregate these in order to recycle them. Use any fundraising money to put up garbage disposal bins along the road. Also, they will be cleaning all the underwater dive sites and getting rid of all the fishing nets and other hazardous objects and taking them to the shore on 16 March from 8.30 a.m.- 12.30 p.m. at the Polhena Diving Centre (FB event link: https://www.facebook.com/events/847359998929524/)

We spoke to Wildlife and Nature Protection Society General Committe Member Zaineb Akbarally about what she thought were the long-term solutions to reducing plastic waste. “The long-term solution to reducing plastic washing up on our beaches and floating in our oceans is to reduce consumption, first and foremost. There are simple measures an individual can take to help, such as say no to a plastic straws and use reusable shopping bags instead of disposable ‘sili sili’ bags when shopping for groceries. The responsible disposal of waste is another way to address the issue; it’s important to segregate waste at home and work and to send recyclable plastics to recycling centres.”

We also asked her who she holds responsible – the public or the companies – to which she responded: “The responsibility lies with the individual. Ultimately, if we can be responsible with our choices and reduce the demand, especially for single-use plastics such as lunch sheets, plastic straws, plastic water bottles, and ‘sili sili’ bags, we would, in turn, force producers and manufacturers of plastics to search for and produce sustainable alternatives.

“In Sri Lanka, public awareness needs to be raised on a larger scale about the harmful impacts of disposing of plastic irresponsibly. On many instances when I have worked with/visited rural communities, they think that they are disposing of the plastic responsibly if they bury or burn it!”
Finally, we asked her of her thoughts on whether beach clean-ups help, and she responded” “Beach clean-ups are a great initiative. Whilst they may only make a small contribution in cleaning up marine litter, they are always of immense educational value as people who participate in beach clean-ups often leave with a greater sense of realisation of the scale of the ‘plastic problem’ and in turn, with a renewed urgency to be responsible consumers of plastic.”

However, this doesn’t take away the impact a beach clean-up will have. But when we focus on the ocean alone, we miss the bigger picture. In reality, plastic is a global health crisis hidden in plain sight and its production is now amounting to more than the world can manage.

December 3, 2021 byNews Admin No Comments
Marine mammals in Sri Lanka’s waters include whales, dolphins, porpoises, and the dugong. All of these marine mammals spend their entire life cycle in the ocean. Therefore, when marine mammals come as