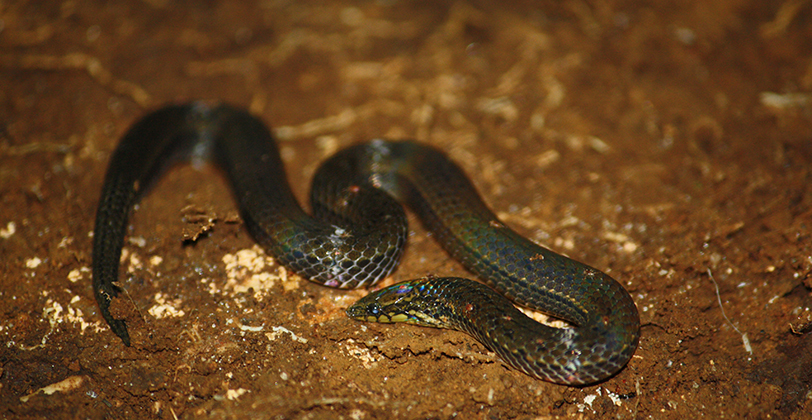 May 26, 2019 by Jennifer Anandanayagam No Comments

Reddish-brown dorsal body paling towards the anterior; scales, each with tiny dark spots; three irregular dotted lines on the dorsum, symmetrically continuing from neck to tail’s end; prominent light-brown dorsolateral stripes, again from neck to tail’s end; a venter that’s primarily peach, save for some black blotching; and a gular fold that’s region yellow.
What I’ve just described is “Aspidura desilvai”, the newly discovered “rough-sided” non-venomous snake in Sri Lanka’s Knuckles massif in the Matale District. According to a new paper published in Zootaxa, a peer-reviewed scientific mega journal for animal taxonomists, “Aspidura desilvai” is confined to the Knuckles conservation area, and is found in and above the lower montane forests of Knuckles.

Zootaxa is published by Magnolia Press, and the paper titled “A new species of Aspidura Wagler” was authored by L.J. Mendis Wickramasinghe, Imesh Nuwan Bandara, Dulan Ranga Vidanapathirana, and Nethu Wickramasinghe, all of whom call themselves “avid nature lovers”.

L.J. Mendis Wickramasinghe is the Founder and President of the Herpetological Foundation of Sri Lanka, and is the principal investigator in the current project. He has close to two decades of field herpetological (reptile and amphibian) experience in Sri Lanka with a focus on taxonomic identifications. He has contributed towards national projects on identification of threatened species in Sri Lanka and has facilitated the declaration of several protected areas in Sri Lanka. He is also a member of the Experts Committee on Herpetofauna in Sri Lanka, under the National Species Conservation Advisory Group (NSCAG), and is also a member of several international bodies including species survival commission groups of the International Union for Conservation of Nature (IUCN/SSC).

Nethu Wickramasinghe is the project coordinator. He works on molecular phylogenetics of blind snakes and is also a freelance science journalist.

Dulan Ranga Vidanapathirana is the Vice-President and a founder member of the Herpetological Foundation of Sri Lanka, with over 10 years of field herpetological and birding experience in Sri Lanka. He is also a natural history tour leader at the Bird and Wildlife Team.

One of the authors, Imesh Nuwan Bandara, speaking to The Sunday Morning Brunch explained that he first spotted the snake in 2006 while hiking in Hunnasgiriya. “Thereafter, I found it in a few other locations and discussed with our team about the possibility of it being a new species. Then, as a result of a field survey in Knuckles, we sampled the species,” said Bandara, referring to his fellow authors who have “a deep affection for crawling creatures”, which is what attracted them to herpetology.

The new species and the threats it is facing

The species belongs to the Aspidura genus of the Colubridae family. “The genus is endemic to Sri Lanka. These snakes are commonly known as rough-sided snakes; in Sinhala ‘මැඩිල්ලා Madilla’,” explained Bandara. “Aspidura desilvai”, named in honour of Pilippu Hewa Don Hemasiri de Silva (1965-1981), a former director of the National Museums of Sri Lanka and author of several books, is the newest member of a family of nine different species.

“The name was given in recognition of his (Dr. P.H.D.H. de Silva) tireless services to the country, while in service and through his many publications, especially as the author of the book titled ‘Snake Fauna of Sri Lanka’,” said Bandara.
The snake’s habitat can be described as consisting closed canopy forests dominated by Syzygium sp. “The moist, cooler habitat is densely populated with large and medium-sized trees which are heavily covered in epiphytes. No direct sunlight falls to the forest floor, and the undergrowth where the species were found was not well established. Relatively thin litter cover was observed in the habitat,” explained Bandara.

The snake is said to bear the colour of latosolic soil. “This soil type is the prominent soil type in the area the snake inhabits.” Delving further, Bandara said that according to evolutionary biologists, the colour of an animal can mainly be an adaptation to its surroundings, for greater survival advantage. “So it is a camouflaged snake in its habitat. Other members of the genus show similar body colours that blend with their surroundings.”

This beautiful, small burrowing snake, commonly found under piles of humus, leaf litter, and rotten timber, is no sooner in the limelight before being faced with multiple threats to its survival, according to the paper. Significant habitat loss through forest fragmentation, illegal cardamom plantations, uncontrolled gem mining, forest fires, and the introduction and spread of invasive alien species are the main concerns.

“Based on our present study, this species is limited to a habitat of as low as is 120 km2 across the Knuckles landscape. During the last decade, the number of visitors travelling in vehicles to the area has increased rapidly,” shared Bandara, adding that they themselves had observed as many as seven road kills of this species in the Riverstone area alone. “Habitat destruction has increased simultaneously with the expansion of roads, increased number of motor vehicles, and unsustainable infrastructure development activities.” 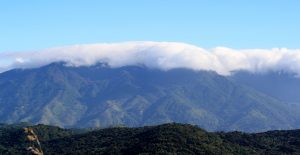 The cultivation of cardamom in a large scale in montane forests, says Bandara, is also a major threat to the newly discovered species. “Cardamom plantations alter the entire natural ecosystem the species inhabits.” Gem mining too is said to cause similar, if not more, threats to the snake’s natural habitat.

Moving on to highlight another concern, Bandara shared that the spread of the invasive alien mistflower species called “Ageratina riparia” into montane forest areas also poses a threat as they destroy the native flora and in turn alter the entire ecosystem.

Introduction of more effective laws that would preserve the environment whilst minimising harm to the local communities, promotion of responsible tourism, introduction of alternative and more sustainable livelihoods, conservation education and awareness, and re-introduction of traditional conservation values and practices to society are some solutions Bandara proposes would mitigate the threats. “We should also include the importance of Sri Lanka’s biodiversity and conservation in school curriculum not just as a subject, but as a value to pursue,” he said, referring to a more holistic approach, so similar threats aren’t encountered in the future.

“Knuckles is a fragile forest area with unique characteristics and a few point endemic species. Many rare species and some endangered and threatened species are found here. Some of these species are globally threatened and some are nationally threatened. Threats spur from any type of destruction to the forest. Consequently, most floral and faunal species in the area are affected,” he added.

Bandara feels that herpetology has been gaining momentum in Sri Lanka in the recent past, with a growing interest among youth about the field. Unfortunately though, he feels that they do not see enough measures being taken to protect the country’s biodiversity and conserve the environment. “We all must realise that healthy ecosystems are absolutely paramount for human life.”

The authors of the paper feel that Sri Lanka is a biodiversity hotspot. “Sri Lanka is one of the most biologically rich and most threatened places on earth.” Given the number of species present – reptiles and amphibians – and their endemicity, herpetology is a sector that needs a lot of work, according to them.
Let’s hope our newest addition to the Colubridae family has some promise for a future.

August 25, 2019 byThe Sunday Morning No Comments
Whether pine plantations should be extracted from the mountainous areas or not has been a decade-old debate between different environmentalists.