A recent incident where a jeep (which I happened to be in as well) was charged by a tusker that then lifted the jeep with the strength of its tusks as they pierced the vehicle brought forward the issue of safety and responsible driving inside Sri Lanka’s wildlife parks.

We were too in shock to react. We later found out that this lack of response prevented the tusker from attacking us again.
However all the while we were following it around, we felt we were too close for his comfort, which ended up annoying him. It was only fair by him, to be honest, as we were the ones intruding his space. Thankfully, the jeep didn’t topple and none of us were injured. We learnt that it was the first time an incident of this nature occurred in this particular park.
Could this experience have been avoided?

A call for sensitivity

We spoke to Jehan Canagaretna, a committee member of the Federation of Environmental Organisations (FEO), about the training the jeep drivers and trackers receive. He is also part of the Kumana National Park committee.

He agreed that training has been a huge problem all over the country. They had introduced a two-day training programme for jeep drivers through the Nature Interpretation Programme (NIP) and have successfully conducted eight training sessions in Minneriya and two in Wilpattu.

The NIP is an awareness and educational programme to raise sensitivity for wildlife in jeep drivers at all national parks and to move them towards a more responsible tour guide culture.

“We hope to expand our training to Udawalawe and Yala soon. The problem with smaller parks like Kumana and Wasgamuwa is that these parks have only about 25-30 jeeps in total, and so they get overlooked and the drivers don’t receive training.

“It’s not their fault and it’s something that is being looked at now. Most of the funding for these programmes comes from the Sri Lanka Tourism Development Authority (SLTDA), which partners with the Department of Wildlife Conservation (DWC).

“However, even with all this training, there is always a 5% chance that your actions may not get the desired results. And so you must always keep your distance. The ability to know that comes partly through training and partly with experience.”

The tracker per jeep conundrum

“Yala has up to 1,100 jeeps and Minneriya has 800; these are massive numbers. The DWC doesn’t have a sufficient number of trackers to accompany all of them. The usual practice is to send one tracker with a group of people that comes together where all the other jeeps are told to follow the one jeep with the tracker.

“There are only 150 trackers at Yala, against 500-600 jeeps that enter daily. So the jeep drivers carry a big responsibility as most of them will not have an experienced tracker with them.”

Another observation that they’ve made along the years, according to Canagaretna, is that youngsters in the area are easily attracted to this vocation. Most of the drivers come from the communities around the parks where the moment they turn 18 or 19, they begin to drive a jeep with their license.

“Their understanding of the animals is naturally not up to standard,” shared Canagaretna, adding that they especially don’t understand what a foreign tourist wants to experience. “This is also a serious concern that must be addressed,” he stated.

Canagaretna stressed that whenever a private vehicle enters the park, it is mandatory that a park tracker is on board. Cars and vans are allowed to enter parks only during the dry season and are only allowed to drive through the main roads, their movements limited. “Parks also don’t allow busses anymore as they disturb the animals. If you’re coming in a private vehicle, we always encourage you to come in a four-wheel drive,” said Canagaretna.

Guidelines for a safer experience

Canagaretna also gave some guidelines and ways in which parks can ensure that people enjoy a safer and better experience.
· Have the tracker give a briefing before they enter the park explaining everything from the rules and regulations to the park’s background information. This is a practice followed in national parks abroad and it is time we also start.
· Make special emphasis on being as quiet as possible. It really can disturb the animals, especially an elephant in musth.
· Put up signage outside and near the entrance at every park with a list of dos and don’ts.
· Conduct multiple awareness programmes, especially on TV, about the importance of national parks and the behaviour expected from visitors.
· Control the traffic that enters the park daily, as the numbers are rising fast.

Dos and don’ts as a park visitor

We also spoke to Avijja Fonseka, a former employee at Yala National Park and a wildlife photographer also affiliated with the Wildlife and Nature Protection Society (WNPS).

“There have been training programmes for jeep drivers that were introduced lately. The DWC needs a lot of help from NGOs to conduct these sessions in places like Yala and Wilpattu because of the large numbers. The authorities also introduced a rule stating that safari jeeps must be registered with a list of guidelines and that a number of requirements were to be met as well. This is a positive step towards regulating the jeeps and numbers.”

We asked Fonseka to give us a list of dos and don’ts as park visitor with his knowledge gained from visiting parks frequently.

· Make as less noise as possible.
· Do not panic if you see a herd of elephants coming towards you, if you become flustered it will fluster the animal also.
· Do not speed inside the park.
· Do not, under any circumstances, get out of the vehicle.
· Do not feed the animals, even if the driver allows you to.
· If you get to know that a leopard has been spotted in a particular area, do not rush towards it as there will many more jeeps doing the same, creating traffic in the area.

“If you are a local tourist who speaks the language, then speak to the driver. If you feel like they are doing something wrong, tell them then and there. Don’t wait to come out of the park and complain of his shortcomings. After all, you are paying for the jeep, so you do have a say.”

With the world moving towards ecotourism – a form of tourism involving visiting fragile, pristine, and relatively undisturbed natural areas, intended as a low-impact and often small scale alternative to standard commercial mass tourism (also defined as tourism directed towards exotic, often threatened, natural environments, intended to support conservation efforts and observe wildlife) – there is added pressure on the SLTDA to ensure standards are maintained.

Need for a more holistic approach 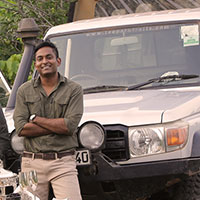 We also spoke to Leopard Trails Founder and Managing Director Radheesh Sellamuttu who has introduced a course for Safari Guides.

The course’s most successful trainees will be offered full-time positions at Leopard Trails and the others will be recommended to other hotels, lodges, and camps. It is a six to eight-week course based in the Colombo, Wilpattu, and Yala national parks.

“The course this year will be run by my friend and colleague Don Heyneke (ex-head guide and head trainer of Londolozi Private Game Reserve in South Africa and current Co-founder of Escape Safari), along with myself and some of our senior guides. It is a free course and is available for everybody as the knowledge is trainable. This will be our second successful batch.”

Sellamuttu also agreed that there is a lack of trained drivers. “Most of them are from the community with no education regarding national parks. The trackers are under the jurisdiction of the DWC and are well trained, but due to the lack of facilities, there aren’t enough trackers in relation to the large number of jeeps that enter the park daily.

“Our clientele is different; they are high-end and expect a very specific sort of experience. So we send a trained and qualified safari guide from our company to accompany them. Apart from their knowledge about wildlife, these guides are also trained to communicate well with foreign clientele. There are many tour companies that follow the same practice, so there is the possibility to strive for a good professional career in the industry.

“We introduced this course and currently, we are the only ones conducting one of this nature. We developed the course outline internally with the guidance of Field Guides Association of Southern Africa (FGASA) and we hope to affiliate with them in the future, and hopefully open a training school here in Sri Lanka.

“This course will include modules on everything from guiding in the natural environment to weather and climate, basic ecology, botany and grasses, conservation management and historical human habitation, how to guide when there is no game around, etc.

“Apart from this, they will also be taught how to host and be good at storytelling. It is a balance of both the scientific knowledge and the experience.

“We also tried to approach a few jeep drivers and suppliers specifically from the Yala National Park. They admitted to not receiving training and learning on the job. But they refused to give out their names, afraid that it meant losing or affecting their livelihoods. Most of them work very closely with reputed tour companies in Sri Lanka,” he concluded.

With the efforts of the DWC and supporting NGOs like the FEO there are training programmes being conducted for jeep drivers.

Perhaps more effort must be made in increasing the number of trackers available, which should be made possible with the rapid increase in revenue from these parks.

However, it is clear that there are positive initiatives with steps being taken in the right direction, so there is hope. We only hope these efforts will continue in the long term.

Distanced Shakespeare: Theatre for the pandemic season with Neidra Williams

A spot of local culture every week