December 2, 2018 by themorninglk No Comments

A glimpse into Sri Lanka’s treasure trove of marine wildlife, ‘Out of the Blue’ – a book by author Howard Martenstyn – dives into the secrets of the deep ocean.

Uncovering a range of data that poses significant value to our understanding of whales, dolphins, and a range of other marine wildlife, Howard condenses his vast knowledge on this subject into a second edition to his best-selling novel from 2013. 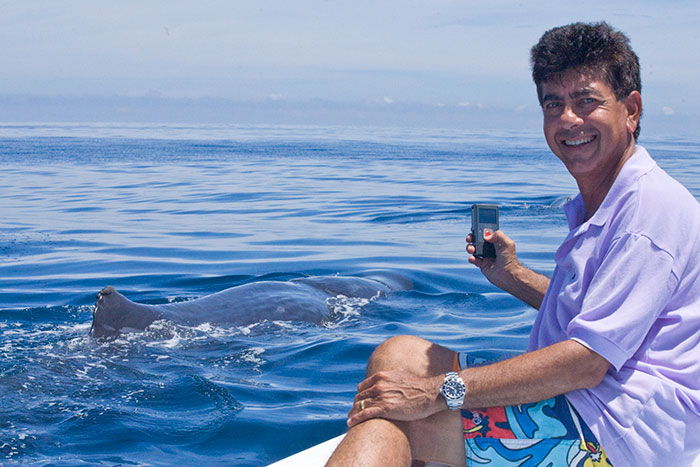 From anatomical insights to seasonal behavioural variations, the book allows readers to gain a comprehensive overview of the aquatic wildlife we’re blessed with. In our conversation with the brain behind this book, Howard shared that his sincere hope is that people use his work to realise the value of these animals to our ecosystem.
Speaking about his background and his desire to embark on this voluminous second edition, the author shared the origins of his deep ties to the sea.

Claiming to have been born with fins, the ocean played a huge role in the author’s formative experiences. With a father and brother involved in maritime business and water sports and wildlife, respectively, Howard felt his calling after being embroiled in the corporate world for around 30 years. Upon a sudden epiphany, however, he took an early retirement and moved to Sri Lanka to pursue his passion – the mammals of the deep sea.

Bearing in mind the lack of knowledge on marine life amongst a majority of locals, the focus of his book is research and education, not conservation. While he believes the latter is crucial in the discussion of marine wildlife, Howard hopes that his book inspires people to be more proactive about safeguarding Sri Lanka’s oceanic treasures. He’s also confident that ‘Out of the Blue’ will be a guide for conservation efforts in the future – not in this generation, as he says, but in the next.
Speaking about the local challenges threatening these creatures, Howard is of the opinion that plastic disposal continues to be a problem. While concern about plastic in the ocean is ‘fashionable’, as he puts it, the marine biology expert hopes that such concerns are not a temporary fad.

On the accountability required by tourists and locals who venture out to the sea, the author continuously reiterated that we are only visitors to the ocean – a fact forgotten in the depth of man’s hubris.

He also outlined the threats posed by illegal fishing activity and the phenomenon of netting. With regard to the former, dynamites and Laila (Surukku) nets are grave dangers that threaten the lives of all sea creatures. Blasting bodies of fish to the shore, the entire ocean floor is decimated by this practice and remains a serious issue to this day.

With regard to netting, Howard shares that when fishermen abandon their used nets in the open sea, these trap animals until they succumb to a horrible fate. What’s worse is that these then float in the waters, until they disintegrate many, many years later.

Another threat is the behaviour of people at sea. Approaching whales and other creatures too close, for instance, can disturb their feeding and surfacing patterns. As Howard pointed out, this is the downside of irresponsible tourism.
That being said, he was also careful to mention that he does not discourage tourism. In fact, he believes that it is crucial in encouraging people to become more conscious of conservation. While he no longer undertakes fishing expeditions as a pastime, he emphasises that for those who enjoy the sport, ‘catch and release’ tactics are a pragmatic alternative to traditional fishing activities.

Stating in this process that ignorance is bliss, Howard opines that many undertake destructive underwater activities owing to a lack of knowledge. It is for this reason that he believes that education is the most sustainable way of changing behaviour.

For those who delve deep into the rich contents of ‘Out of the Blue’, one thing that stands out, in particular, is the discussion of locations – apart from Mirissa and Kalpitiya – that are hotspots for whale and dolphin sightings. In questioning the author about this, he mentioned that Colombo is a prime area, especially in August.

Given that the Western coast of the country experiences significant rain during the monsoon season, there is a corresponding increase in sea creatures in the area. This also has to do with the rich minerals that flow to the sea as a result of the showers.

Stating that Colombo can be a sight for such attractions, in the future, the author also noted that we have the infrastructure for this already in place. In this conversation, yachts were made out to be the future of whale watching, as opposed to the boats being used at present.

When asked about the innovations oceanic conservation efforts can benefit from, Howard mentioned that practices like ship strikes and tools like pingers, which keep whales and other creatures away from boats, can prove to be highly useful.
Ending with the note that his book encourages people to go out to sea, the author urges readers to remain responsible. “People need to realise how important the sea is,” was the concluding call in our discussion with him. Perhaps with ‘Out of the Blue’, this realisation will soon become a part of our collective conscience.

The launch of the second edition of the book ‘Out of the Blue by Howard Martenstyn was held at the Dutch Burgher Union on 27 November. The book contains stunning new photographs and up-to-date information.

For those who wish to explore the deep seas, ‘Out of the Blue’ will be available at its wholesale price at the Dutch Burger Union (DBU) throughout December.

Howard Martenstyn, the author, will also be available for questions and book signings on Sunday, 9 December, at the DBU until 2.00 p.m.

The media in times of Covid-19 with Thanuja Jayawardana

April 27, 2020 byJennifer Anandanayagam No Comments
Considering the role of the media in such times, we reached out to veteran journalist and renowned media personality Thanuja Jayawardana to share her thoughts on how we should all be going about respo