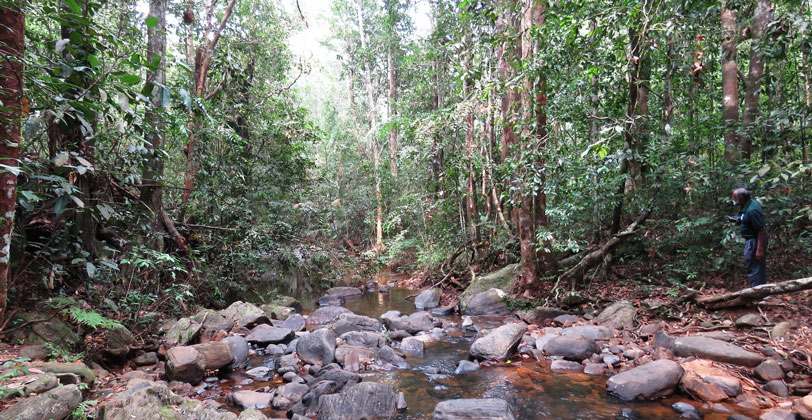 Sinharaja: From a timber reserve to a biological treasure trove

The Wildlife and Nature Protection Society (WNPS) will have its monthly lecture on 21 March on the topic “Sinharaja: From a Timber Reserve to a Biological Treasure Trove – What Next?” to be delivered by University of Peradeniya Emeritus Professors Savitri and Nimal Gunatilleke.

The “infamous mechanised logging project of Sinharaja” is now in the well-documented annals of history. The role of environmentally conscious public in discontinuing this ill-advised project is hailed as one of the major successes of politico-environmental campaigns of the day for public good. It is indeed heartening to note that the momentum generated from resisting this abominable Sinharaja fiasco is sustained even to date though with varying degrees of success.
The conservation scientists, who made an entry to this scene of “saving, studying, and wisely using” the elements of rich repository of biological wealth, have over the years unearthed some of the hidden treasures of global significance underpinning the conservation value Sinharaja and its surrounding relic forests. These rain forests of South-west Sri Lanka provide one of the most outstanding regions for studying the process of biological evolution in this era of molecular biology.
However, on the downside, the threats to the survival of Sinharaja and other rain forests of are also continuously raising their heads, suggesting the need for constant vigilance on the part of environmentally responsible citizenry and conservation scientists alike to conserve this biological treasure trove that continues to provide ecosystem services for the wellbeing of the humans and other biota.
Professors Savitri and Nimal Gunatilleke, retired professors in botany at the University of Peradeniya, have been conducting long-term biological and ecological research in Sinharaja and several other forests in Sri Lanka over several decades. In recognition of their research endeavours, they have been awarded the UNESCO’s Sultan Quaboos Prize for Environmental Preservation in 1997. Prof. Savitri Gunatilleke has been selected as an honorary fellow of the Association of Tropical Biology and Conservation in 2016. It is the highest award given by the association in recognition of long and distinguished services to tropical biology. Prof. Nimal Gunatilleke holds a titular award of “Vidya Nidhi” (Science and Technology, 2005) received from then President of Sri Lanka. They both are fellows of the National Academy of Sciences of Sri Lanka.
———-
Public lecture series of the Wildlife and Nature Protection Society:
. 21 March, 2019 at 6 p.m.
. The Jasmine Hall at BMICH
. Open to both members and non-members
. Entrance free

Greening the City of Colombo

November 2, 2020 byJennifer Anandanayagam No Comments
The Federation of Environmental Organisations (FEO) launched its recent initiative titled “Greening the City Of Colombo”, where it proposed a city-wide tree planting campaign

The Ink Station by Uditha Rangana :Is a tattoo still a taboo?

January 20, 2021 byRusiru Keppetipola No Comments
Having a tattoo on the body was still considered a taboo not long ago, as it was associated with criminals to show gang membership. Only in recent years have tattoos started turning into..