Building a solar-powered tuk-tuk from scraps

August 18, 2021 by Dimithri Wijesinghe No Comments

15-year-old Suntharalingam Piranawan from Kilinochchi spent his Covid-19 lockdown building a solar-powered tuk-tuk. Speaking to Suntharalingam and his grandfather, Dureisami Suppaiya, the duo shared that the teenager has always had a knack for building locomotives. 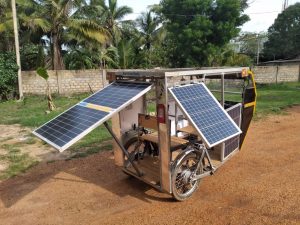 They shared that you can buy scrap metal in Kilinochchi for Rs. 100 per kilogramme, and because they can sell the remaining parts, they decided to invest in some scraps. Having collected the metal, and utilising the set of tools he has accumulated over a lifetime of constructing and reconstructing various items, Suntharalingam was able to complete his latest creation – the solar powered tuk tuk – in just eight months.

“There must be so many others like me, using this pandemic time to build things. It was a great form of stress-relief for me to have something to focus on,” said Suntharalingam.

A student of Kilinochchi Central College, Suntharalingam, according to his grandfather, has always been keener on building things and taking things apart. “He always wants to follow me around and learn and figure things out for himself. He is not the type of child to stay inside all day, he is always outside, curious as ever, never resting.” 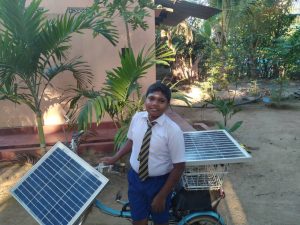 Both grandfather and grandson appear to be an inseparable duo and Suppaiya shared with us that even though they don’t have any mechanics in the family, he has always had really old vehicles which constantly required repairing. “I was always going to the garage to get something or the other fixed, I was constantly replacing parts and eventually started doing some of those quick fixes by myself, having picked up a few tricks here and there” said Suppaiya, adding that because Suntharalingam is always with him, his grandson, who naturally had a curious mind would also pick up on a few things.

Suppaiya said that the three-wheeler was not Suntharalingam’s first solar-powered creation, as he first started with a solar-powered foot cycle, following which he made a solar-powered coconut picking machine and a coconut scraper. He said that in 2017 his grandson made his first battery-powered bicycle, which he drove around everywhere and having seen this, in 2018 they were gifted a solar panel, which Suntharalingam then hooked up to his bike. As they were given some financial assistance from a few benefactors who saw their progress, he shared that they were able to purchase more solar panels and complete this final tuk tuk. 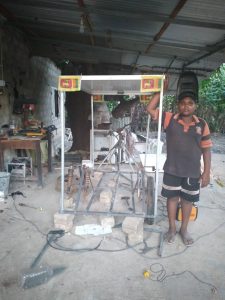 He said that while for the time being this is simple mechanics, he believes that his grandson has great potential because of his passion and strong drive to succeed. “He doesn’t give up, he keeps at it, he can stay focused on the task,” said Suppaiya, adding that his grandson has big plans for his next development.

Suntharalingam hopes to soon get started on his next project. If he is able to get support he needs to source some of the raw materials, he wants to construct a solar-powered car, and he said that it would be incredibly helpful if the authorities could help make this happen.

October 6, 2019 byThe Sunday Morning No Comments
The world’s most affordable book sale is just around the corner, longing to grace Sri Lanka for the third consecutive year.

March 25, 2019 bythemorninglk No Comments
Caramel Pumpkin initiated a CSR project for the purpose of shedding light on the excess harvest of pumpkin in areas such as Ampara, Anuradhapura, and Monaragala.