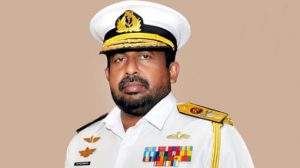 The emergency Cabinet meeting summoned by President Maithripala Sirisena this afternoon is to discuss issues related to Chief of Defence Staff, Ravi Wijegunarathne, who is currently in Mexico, The Morning reliable learns.

A senior government minister told The Morning that several issues have arisen following the move by the Criminal Investigations Department (CID) to probe the Chief of Defence Staff for his alleged involvement in the abduction and disappearance of 11 youths.

The CID was to interrogate Wijegunarathne on Monday (10). However, Wijegunarathne had left the country for Mexico during early hours of Monday without any communication to the CID.

A request had later been made from the CID for another date for Wijegunarathne to make the statement.

According to the senior minister, a discussion the President had held with relevant authorities on the issue had also been publicized in some media and various interpretations have been given to the issue.

“The President therefore decided to summon the Cabinet to discuss the issue,” the minister said.

April 8, 2021 byMihi Perera No Comments
Parliament proceedings were adjourned for five minutes after a tense situation was reported over Ranjan Ramanayake's vacant seat in Parliament.

July 1, 2021 byMihi Perera No Comments
The Ministry of Health says that random PCR tests and rapid antigens have been launched throughout the country to find out how the Delta Covid v, which is currently spreading around Colombo, has sprea