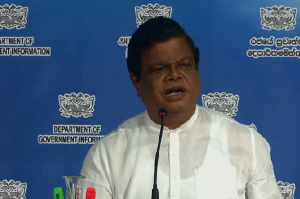 The Cabinet has approved a proposal to withdraw the Counter Terrorism Bill which was introduced by the Yahapalana Government.

This decision was announced by Cabinet Co-spokesperson Minister Bandula Gunawardana at the cabinet press briefing today.

According to Minister Bandula Gunawardana the proposal was put forward  by Foreign Affairs Minister Dinesh Gunawardena at yesterday’s cabinet meeting.

Gunawardana claimed that the Bill was brought by the previous government on needs of certain international forces.

He added that the draft bill was a means to pamper terrorism and intimidate civil society.

Former Minister of Foreign Affairs Tilak Marapana presented the Counter Terrorism draft Bill in Parliament in a bid to replace the Prevention of Terrorism Act.

April 18, 2022 byNews Admin No Comments
An anti-terrorism court in Pakistan awarded death sentences to six accused over their role in the lynching of Sri Lankan national Priyantha Kumara at a Sialkot factory, Pakistani reported on yesterday