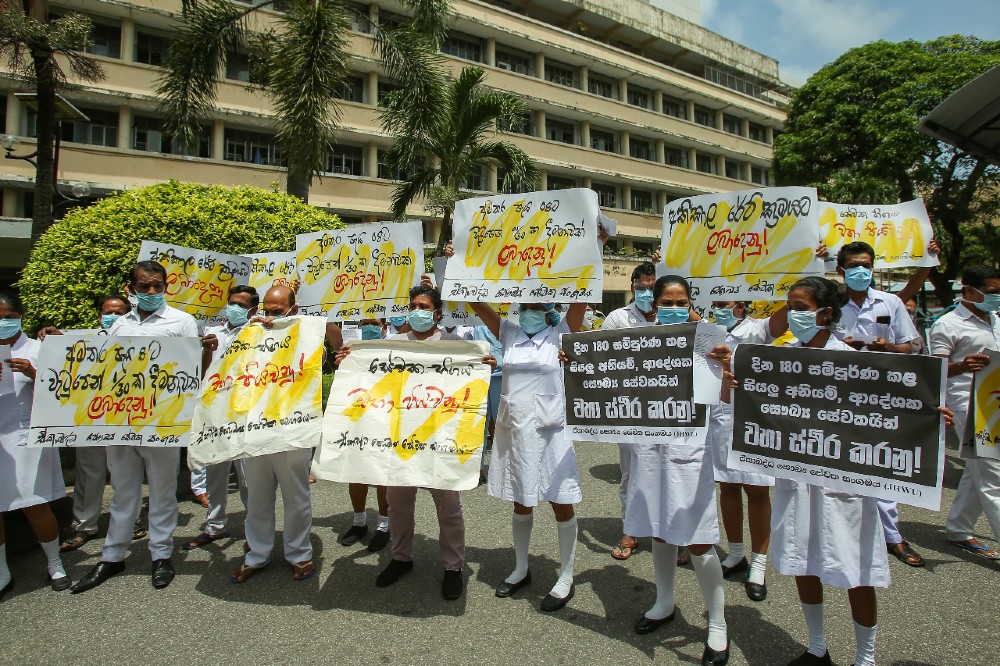 Yesterday (5), Sri Lanka saw people lining up in front of military hospitals to receive the Covid-19 vaccination, in a context where various opinions have already been expressed for and against the military’s involvement in the country’s Covid-19 management efforts. The country is in a dilemma, as on the one hand, Sri Lanka is going through a situation where every helping hand matters, and on the other hand, allegations of “militarisation” against the Government are on the rise.


However, as medical professionals’ contribution increased and resources to manage the Covid-19 situation decreased, more conflicts and disputes began, especially with regard to the facilities and perks available for them. In addition, a dispute between medical professionals, particularly between doctors and supplementary medical professionals, also erupted. Among the trade unions that have claimed that health sector workers are not receiving adequate facilities are, the Public Health Inspectors’ Union of Sri Lanka (PHIUSL), the Government Medical Officers’ Association (GMOA), the Government Medical Officers’ Forum (GMOF), the College of Medical Laboratory Science (CMLS), and nurses’ trade unions.


However, all this takes place in a context where a considerable portion of the country’s health sector workers has threatened to withdraw from Covid-19 management efforts, especially the vaccination drive and testing, and taking the assistance of the military, as one of the biggest workforces the country has, is understandable.

Strikes in the midst of Covid-19

In the past few months, certain health sector trade unions, including those in the supplementary healthcare sector, threatened to launch strikes owing to several reasons; the main reason being the lack of facilities received from the health authorities to perform duties pertaining to managing the Covid-19 situation. These included many facilities ranging from personal protective equipment (PPE) such as masks to PCR machines.


In a letter addressed to Health Ministry Secretary Dr. S.H. Munasinghe, they mentioned these requests: promoting 12 first grade workers who were removed from their positions arbitrarily, granting overtime pay (1/80th of the monthly salary as the per hour overtime payment) and updating other related allowances, issuing suitable salary scales for nurses and supplementary graduates and rectifying the shortcomings contained in the salary circulars, implementing the Rannuge Salary Commission recommendations to remove salary anomalies, increasing the Rs. 3,000 Disturbance, Availability, and Transport (DAT) allowance to the Rs. 10,000-15,000 range, giving the emergency allowance to all supplementary doctors, implementing a system of granting promotions based on performance and educational skills, granting a research allowance for supplementary doctors, granting service extensions for superintendent grade supplementary medical professionals, establishing the positions of director and deputy director for the services related to supplementary medicine which have already been proposed, updating the number of permitted officers, giving recognition to the services pertaining to supplementary medical services, and making proper management training mandatory instead of a level three efficiency mark.


To look into the backdrop of the strikes launched by the supplementary healthcare sector trade unions, The Morning spoke to PSM and CMLS President Ravi Kumudesh.


He noted that the PSM’s strike was mainly based on administrative-level issues prevailing in the health sector and the authorities’ lethargy in addressing them. Adding that the supplementary medical sector has been neglected, he noted: “Professions of supplementary medicine are independent professions, and what we need is the independence and dignity of these professions. It is being destroyed by the Health Ministry. The Ministry acts more like a ‘doctors’ Ministry, and from time to time, using administrative and political powers, it takes decisions that affect this service’s dignity and independence”.


“This situation affects not only the supplementary medicine sector, but also paramedics and nursing. The Health Ministry has worked against the staff grade system, and also superintendent grade workers are being obstructed when performing their duties. When it comes to the promotion scheme, even though it takes 20 years for supplementary medical workers to be promoted to the second grade, doctors have the privilege of achieving the same in nine years, and this situation creates a massive anomaly. When it comes to doctors, the overtime pay rate is 1/80; however, in the supplementary medical sector, the rate is 1/200 or 1/240. There are incidents where their payments were also cut. The Health Ministry never pays adequate attention to such issues.”


According to Kumudesh, the health authorities have, using medical administrators, deliberately suppressed these independent professions as a technical service.


The Morning also spoke to GMOF President Dr. Rukshan Bellana who has been vocal about the issues faced by doctors during Covid-19 management efforts in the recent past. According to Dr. Bellana, there is a severe scarcity in facilities including masks, and even facilities like PPE, which in some instances are donated, are lacking. In addition, doctors receiving only four hours to do extra work (overtime work), even though they work a lot more than that, is a pressing issue, according to him.


He added: “That is not adequate. As a whole, doctors, when performing their duties today, take a lot of risks. In addition to that risk, when it comes to overtime pay, doctors work up to 18 hours a day even when sometimes they are required to work only 12 hours a day. Regardless of the number of hours they work (normal working hours and overtime combined), they only get paid for four hours. The limit pertaining to overtime pay has been set in an unfair manner, according to the doctors. Therefore, we are of the opinion that this limit should be removed, and we do not see any proper basis in imposing this limit. If we are getting them to work, they should be paid for the amount of work they do, and I think we cannot impose limitations.”


When questioned about the state of the discussions with the Government in this regard, he added that it was the GMOF that first requested that the age of retirement should be increased up to 63 in the 2018-2019 period. “If we gave those facilities to doctors without any special treatment, the situation would be better.”

Response of the Govt./health authorities

We also questioned about the response of the Government and/or the health authorities in this connection, to which Kumudesh responded: “These discriminations take place against non-Bachelor of Medicine, Bachelor of Surgery (MBBS) health professionals, including PSMs, paramedics, lab technologists, and nurses, and when it comes to the Government’s response, it is unsatisfactory. There were incidents where certain selected health sector trade unions were invited for talks, which raised concerns as to whether the issues would be aggravated because the discussions were held with selected trade unions despite all trade unions having faced the same type of issues. These discussions did not at least include the trade unions that launched the protests. Giving solutions based on the concerns of one or more selected groups is an issue.”


He also noted that health authorities, especially those of the Health Ministry, not taking the initiative to discuss the issue faced by other parties/trade unions is a questionable situation, and that by doing so, the Health Ministry Secretary has essentially ignored his duty.
“The Health Ministry acts as a ‘doctors’ Ministry, and discussions led by the President and the Prime Minister are not balanced in terms of the stakeholder representation and the health authorities who take part in these discussions remain silent without raising their voice about the nature of the situation. As a result, the decisions taken by the President and the Prime Minister are not really accurate.”
Speaking of the Government’s response regarding the issues faced by the doctors, Dr. Bellana alleged that the Government creates division among doctors as well as other health sectors, and that the Government should look into increasing the number of overtime hours for doctors who work more hours than they are required to.
He also claimed that the current health administration is one of the weakest administrations in history, and that the Health Ministry does not have a proper plan or a vision.
He added: “Around one-and-a-half months ago, we requested Health Minister Pavithra Wanniarachchi to accept that she is not capable of handling the prevailing situation and to step down from her position. We are of the opinion that a person such as Primary Health Care, Epidemics, and Covid-19 Disease Control State Minister Dr. Sudarshini Fernandopulle, who has expert knowledge of the situation and has won the appreciation of everyone, should be appointed as the Health Minister. However, no changes have been made, even though no trade union likes Wanniarachchi. As the GMOF, we believe that the country’s current Covid-19 management efforts cannot get any worse. We are at a very unsuccessful state, from every side.”
Attempts to contact Wanniarahchci, the Public Health Services Deputy Director General Dr. Hemantha Herath, and Dr. Fernandopulle, to learn of their stance with regard to the concerns raised by the health sector trade unions, were not successful. However, at various forums, the health authorities had claimed that they are looking into the concerns pointed out by the healthcare sector workers.
The President also recently agreed to take steps to provide immediate solutions to some of the demands made by the health sector trade unions. Among the proposals the President agreed to implement, were the opening up of a University of Nursing, the reinstatement of the staff status which was suspended during the tenure of the former United National Front (UNF)-led Government, the reinstatement of the mechanism to make promotions from Grade III to Grade II in five years and Grade II to Grade I in seven years, the granting of the Rs. 20,000 annual uniform allowance, the referral of the proposal to consider the current 36 hours working hours as five days (30 hours) a week, to a special committee, and the provision of an allowance of Rs. 10,000 and an additional service allowance of 1/100 of the basic salary as mentioned in a circular issued by the Finance Ministry.


Until last year, Sri Lanka only knew of two types of heroes, namely “Rata Wiruwo” (foreign employment sector heroes) and “Rana Wiruwo” (defence sector heroes); however, the concept of “Suwa Wiruwo” (health sector heroes) came into existence after the Covid-19 pandemic broke out, as the increased need for their contribution to manage the Covid-19 situation rose drastically.


However, despite having become an essential part of the workforce that is expected to rid the country of the pandemic, certain types of workers in the health sector are now faced with the lack of facilitates, anomalies with regard to overtime pay and equal acceptance, in addition to the excessive workload and the issues that continued from the pre-Covid-19 era. Needless to say, if they continue the strikes, the country would be in a more difficult situation than it is now, as the country is already facing a lack of human resources to manage the pandemic management efforts.

November 8, 2020 byCharindra No Comments
The Government is to appoint a committee to make recommendations on the process of holding the much-delayed provincial council elections

No change in tuk fares but bus fares to rise