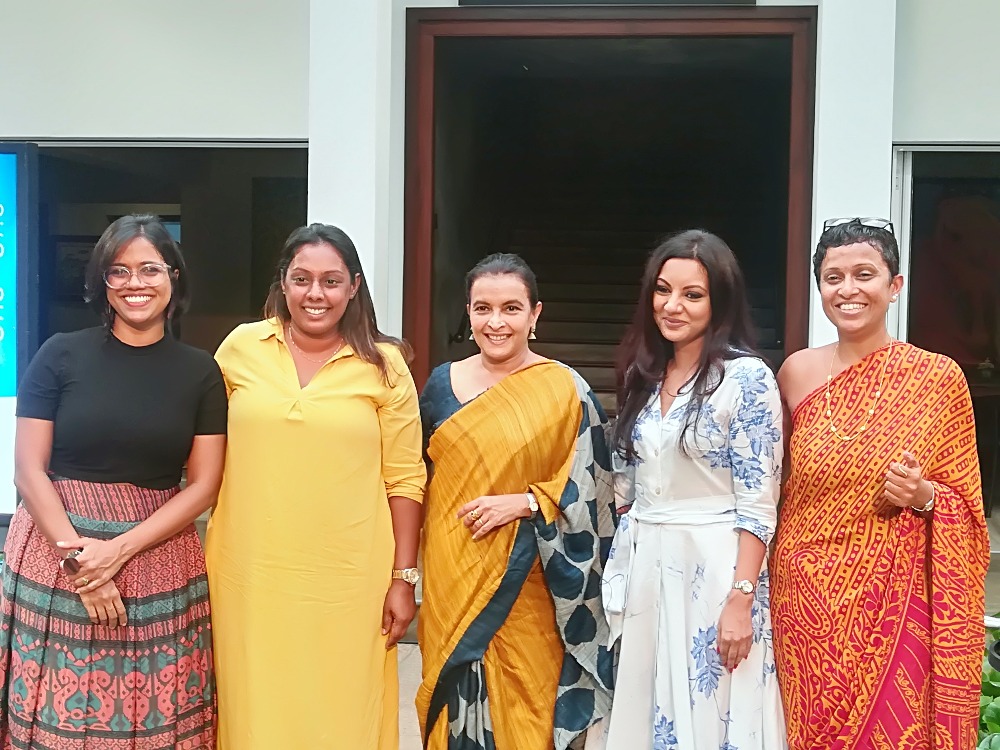 The Cargills International Women’s Day Festival – The Changemakers, presented by Table by Taru and Kaleidoscope with Savithri Rodrigo and partnered by the United Nations Population Fund (UNFPA), successfully concluded their final session on 22 March.


The final day of the four-day-long festival brought recognition to women who have disrupted the entrepreneur space under the theme The Disruptors.


The panellists for the evening were strong women who have altered the status quo and interrupted, interfered, and changed structures and paradigms. These young women do things their own way and bravely took entire businesses and industries and turned them around, but always with the idea of being socially and environmentally conscious. Introducing GoodLife Accelerator Co-Founder/Chief Executive Officer (CEO) and Hatch Works Director and former CEO Randhula De Silva, Ape Founder and COLLAB Co-Founder and Chief Operating Officer (COO) Himali De Silva, and Good Market Co-Founder Achala Samaradivakara.

People resonate, respect, and relate to those who fail: Randhula De Silva 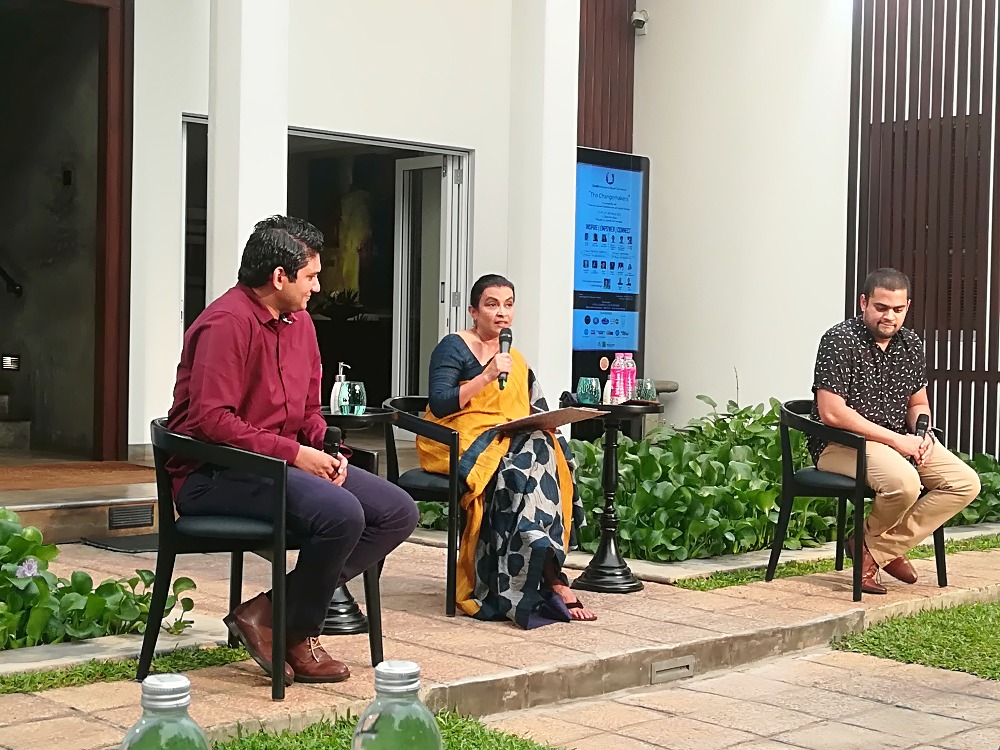 GoodLife Accelerator Co-Founder/Chief Executive Officer (CEO) and Hatch Works Director and former CEO Randhula De Silva spoke about the toughest challenges she had to undergo to come to her current position: “When things become extremely uncertain, a lot of people, especially younger people, are essentially driven to become safe and very linear when things around them are extremely uncertain. You don’t want to rock the boat too much; you don’t want to pull tight. But that’s not how things work. All of us are disruptors and very innovative in the way that we work, and my hard lesson was that not everybody’s ready to be that.”


She explained that she is not a dominating leader in her workplace. She believes that her team gets to play a big role in driving the work and that’s what enables them to do such impressive work.


She also added that she is empathetic, and believes in her team – which takes a lot of trust – so she sees their potential. “There were about eight or nine months where I beat myself up so much because one person on my team was struggling and therefore the team was struggling, and I internalised the whole thing. It wouldn’t have mattered to, for instance, a mature man, but that’s not the case for me. I learned that I can’t solve everything.”


De Silva shared her wisdom for young people who are grappling with these transformative times, stating: “The trick in all of it is to just go ahead and do it, and the more you fail the better you feel. It really is about how you receive your own failures and how you get back up, and believe it or not, people resonate, respect, and relate to people who fail and keep trying to become better and add value. And that’s what GoodLife is all about.”

To normalise a disruptive concept, you have to make it sexy and cool: Himali De Silva

Ape Founder and COLLAB Co-Founder and Chief Operating Officer (COO) Himali De Silva stated that she has an attitude where she likes to look at challenges as learning opportunities. “The trajectory for Ape and COLLAB were very fast, and we haven’t been able to breathe with how fast it has taken off.” She added that the harshest thing she learned along the way was the people who she thought would support her, didn’t. But, she added that she had some pleasant surprises, as people she didn’t know went out of their way to bring her brand to life and helped in any way they could. She commented: “You can’t get caught up in that – you have to keep your focus and keep your head down and get done what needs to be done.


“Colombo is a beautiful, unique creature on its own; it is not like any other city in the world,” she observed, adding that our community is a community within itself, so you have to bring in a community feeling for whatever you do. “We are a charitable nation; you have to bring those elements in. If you want to normalise a concept, which is disruptive, you have to make it sexy and cool.”


She explained that she had to put real people behind her brand for people to identify with it, but she needed to also step back and put herself in her own shoes, and think about what would make her want a piece of clothing. “The biggest success for me was not about how many sales I’ve made; it’s about how many minds I’ve changed and the amount of people I’ve convinced that it’s okay to buy second-hand clothes.”


Himali also strongly believes that it was the generation before her that disrupted the status quo, adding that the root of the problem stems from the separation of gender. “I’m really against terms like ‘boss babe’ or ‘SHE-E-O’ because I can do anything that anyone can, there’s no difference because I’m female.” Despite that, she added that in the world of start-ups, women are a little bit more nurturing because “we’re put in the role of a wife, mother, and housekeeper, so a female element helps grow a start-up”.

We are thirsty to find new ways of doing business: Achala Samaradivakara

Good Market Co-Founder Achala Samaradivakara commented that creating something new is always a challenge because Good Market started off as a non-performing social enterprise as they didn’t feel the need to monetise it. “When we started, we had no business experience. Every rupee was valuable to us so we saved, we planned, and eventually established ourselves. Self-financing is something we struggled a lot with, and are still trying to overcome, but over the years, we’ve gained more experience.”


Sharing her thoughts on why women get on board with the Good Market, Achala commented: “Everybody feels that the new economic system won’t work. I read up on the 2021 Economic Forum and it was stated that the biggest challenge we are facing is climate change. We are facing so many environmental and political issues, so we’re thirsty to find new ways of doing business. It’s time to think about how we can create a better economy; Sri Lanka is a very organic country, we can easily find a solution to the root cause.”


She also added that when she asks these strong women who work with her, that hail from remote villages, simple questions like how they’re going to pack their product, they always come up with creative and innovative solutions – so they have the drive to do better and live sustainably. “In this world, the business industry is dominated by men, but women are constantly coming up with ways to bridge the ecosystem gap by conceptualising creative ideas and striving to create a better world,” she added. She observed that we, as a society, need to change our daily choices and buying patterns and thereby create opportunities for sustainable entrepreneurs and disrupt the whole economic system for the better.

The Packet: An unplanned creative journey

February 9, 2021 byNews Admin No Comments
The very nature of an artist is to push boundaries when exploring the world around them and how they see it. Artists’ methods are as diverse as artists themselves, and when artists come together...