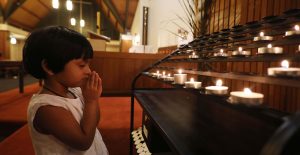 Sunday masses will resume at Catholic churches as per usual from today.

Spokesman to the Archbishop of Colombo Cardinal Malcolm Ranjith and Archdiocese of Colombo Fr. Edmond Tilakaratne said that it had been decided to allow Sunday masses to be held once again from today.

“Masses will be held at churches across the country as per usual,” F.r Edmond Tilakaratne said.

However, he said that Cardinal Malcolm Ranjith would not be holding any special masses.

In addition, Ministry of Defence Secretary S.H.S. Kottegoda in a statement said that additional security had been provided to all religious places.

He also said that security had been tightened at all schools, tourist locations, hotels, and places where the public gather.
“It is our duty to ensure the security and safety of the people of this country.”

Ministry of Defense Secretary said the tri-forces along with the Police had ensured the safety of the nation after the Easter Sunday terror attacks and called on the public to resume their day-to-day activities as the situation was returning to normalcy.

UNF and President on collision course

January 21, 2019 bythemorninglk No Comments
The United National Front and President Sirisena are set to confront each other on the allocation of departments and institutions.

Bus strike likely to be called off

February 8, 2021 byNews Admin No Comments
The strike of private buses that is scheduled to take place tomorrow (9) may be called off as the Lanka Private Bus Owners’ Association (LPBOA) anticipates a positive response from the Government..