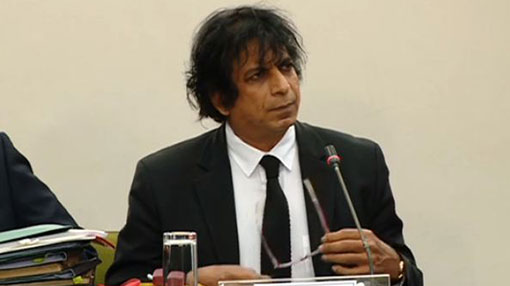 The Catholic Church has pointed out the need for the Criminal Investigation Department (CID) to record a statement from former Attorney General (AG) President’s Counsel (PC) Dappula de Livera regarding the statement he had made, claiming that there was a “grand conspiracy” behind the Easter Sunday bombings on 21 April 2019.


When contacted by The Morning, National Catholic Centre for Social Communications Director and Parish Priest of St. Anne’s Church, Kurana, Negombo Rev. Cyril Gamini Fernando said that de Livera must have made that statement after studying all the volumes of the report of the Presidential Commission of Inquiry (PCoI) into the terror attacks on Easter Sunday.


“Archbishop of Colombo Malcolm Cardinal Ranjith was given only one volume of the PCoI report, but there are several volumes. All those volumes were handed over to the then AG, that is to de Livera PC. The then AG de Livera PC made that statement regarding a grand conspiracy as the AG, after studying all that material,” he added.

Meanwhile, commenting on the recent statement issued by the Police Media Division with regard to the ongoing investigations into the bombings on Easter Sunday, Fernando said that they did not accept such statements. The Police Media Division recently stated that investigations are being carried out by the CID and the Terrorism Investigation Division (TID) in connection with 17 incidents related to the Easter Sunday bombings. It stated that the AG has already filed nine cases against 32 suspects in the Kegalle, Kandy, Kurunegala, Puttalam, and Colombo High Courts. The release issued by the Police Media Division further stated that the officials of the AG’s Department and the TID are holding discussions on filing the remaining cases. Accordingly, the AG is scheduled to file cases regarding eight other incidents soon after the conclusion of the discussions. In addition, the CID and the TID would carry out investigations into the findings of the discussions, it also read.


However, adding that many of the files submitted by the Police and the CID to the AG’s Department regarding the Easter Sunday bombings, according to the former AG, were incomplete, Fernando said that the public should be made aware of whether the files have been completed by now.


“According to the Police Media Division’s statement, only 32 suspects have been charged. But why is the Government not implementing the recommendations of the final report of the PCoI?” He queried and added that the said report states that criminal charges should be filed against former President and incumbent government parliamentarian Maithripala Sirisena, but no preparations to do so appear to have taken place.


He also said that some police officers named as responsible for the bombings in the PCoI report have even been given promotions.


“These moves show that the investigations into this attack are not being carried out properly. What we see is that the Government wants to sweep this investigation under the carpet, but we will not allow that. We are prepared to initiate some international action if justice is not served here,” he emphasised.

Aging fleet to be replaced in coming years: Navy Commander

December 29, 2020 byLahiru Pothmulla No Comments
Navy Commander Vice Admiral Nishantha Ulugetenne said that it is expected to acquire new platforms to the Navy with a view of replacing the aging fleet in coming years.

The night time is the right time

April 22, 2021 byNews Admin No Comments
Taking decisions based on outdated beliefs, or failing to take decisions to match the evolving world, is an accusation that has always been levelled against Sri Lanka’s lawmakers, and the country has