Minister of Power and Energy Kanchana Wijesekera has accepted the letter of resignation from Ceylon Electricity Board (CEB) Chairman MMC Ferdinando.

Wijesekera further announced that CEB Vice Chairman Nalinda Ilangaokoon will be taking over as the new Chairman of the CEB. 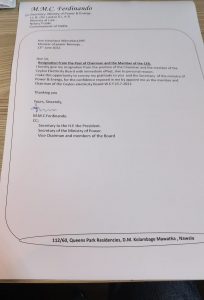 February 24, 2022 byRuwani Fonseka No Comments
Ahead of a visit by Sri Lanka Finance Minister Basil Rajapaksa to India this week, the two countries are close to finalising three defence-related agreements and arrangements that are expected to boos

November 30, 2021 byRuwani Fonseka No Comments
Whilst thanking medical workers for tirelessly working during the most trying times in modern history and focusing praise towards doctors and medical staff in the North and East of the country, Ahila