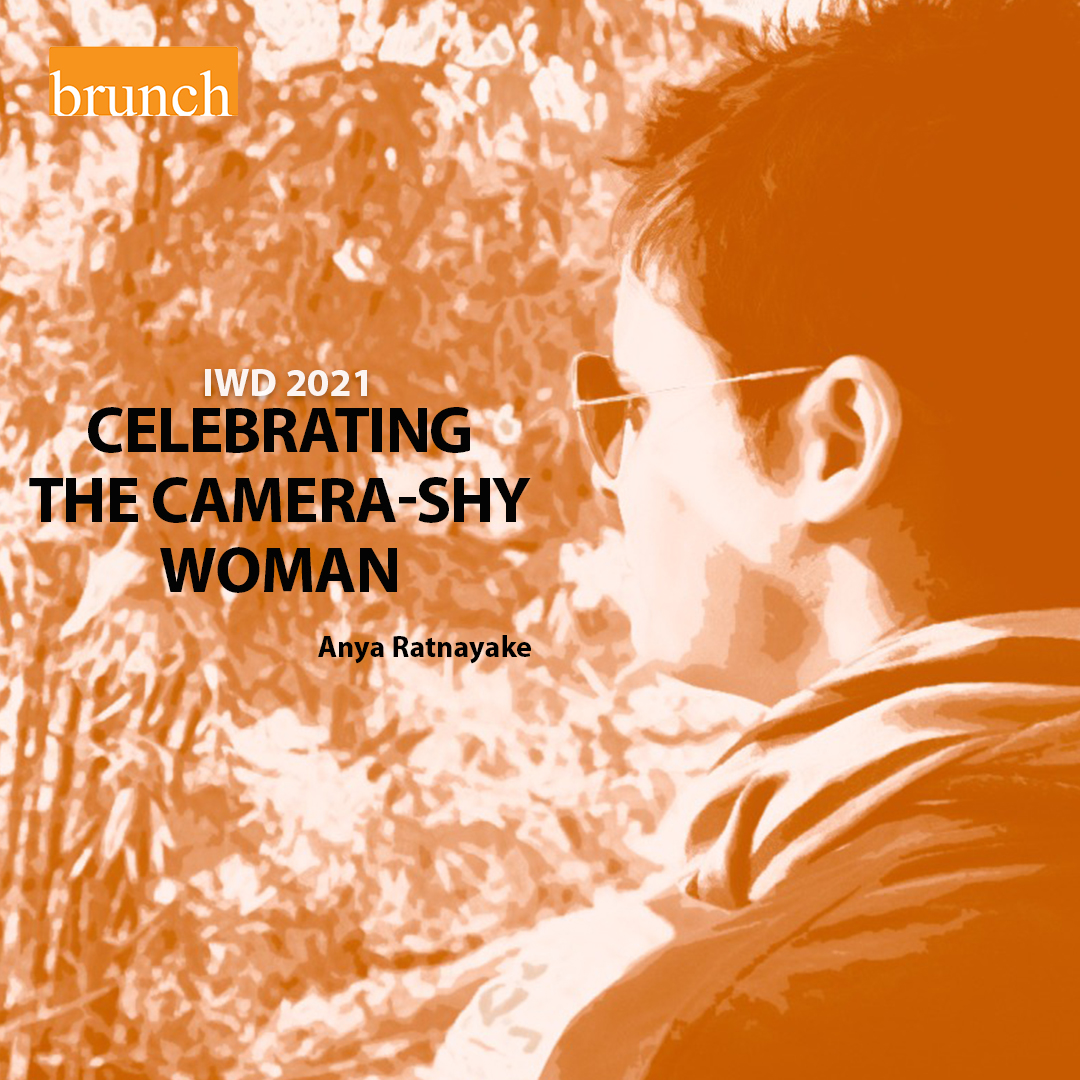 Throughout the month of March in view of International Women’s Day 2021, The Morning Brunch will be speaking to and celebrating some trendsetting and inspiring Sri Lankan women who don’t always make the news, in our series “Celebrating the camera-shy woman”. This week, we spent some time with Anya Ratnayaka.

As we walk into Diyasaru Park along the Japan Friendship Road, we are greeted by Anya Ratnayaka, gear in hand, as she gets ready for yet another day in her effort to preserve nature and the precious ecosystems that are endangered. Celebrating the camera-shy woman this International Women’s Day 2021, we share a laugh as we realise just how camera-shy Anya really is. She is the Co-founder of Small Cat Advocacy and Research (SCAR) and also runs the Urban Cat Conservation Project. Focusing on a segment of wildlife that goes unnoticed by many, she works quietly behind the scenes to protect and preserve the small cats, small mammals, and ecosystems that are under threat and forgotten. We spoke to Anya about her work, her experiences, and what she wants to tell the people of Sri Lanka. Here’s what she had to say. 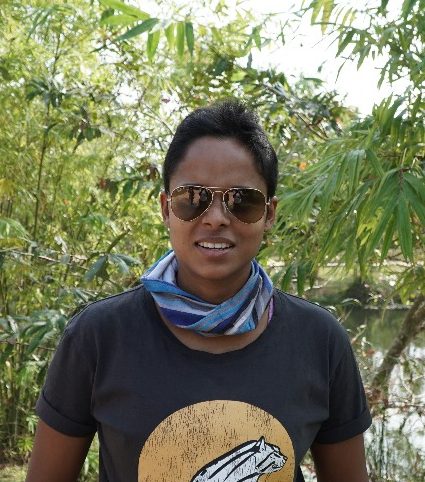 “I really hope that our work will help people look outside the box and become more aware of other species. They’re just as important to the habitat as the leopard, whale, elephant or bear. If an ecosystem is to thrive, all of the wildlife need to be protected” – Anya Ratnayaka

Tell us about your organisation and the work that you do?

The project I run is called the Urban Cat Conservation Project. It is run under Small Cat Advocacy and Research (SCAR) – the non-profit that I co-founded with a colleague of mine. The work that we are currently doing for the project is that we are studying the population of fishing cats in Colombo. This is the only population of fishing cats that are urban. So, it’s a very unique population. And we are hoping that the information that we collect from this study will be useful for a broader conservation programme for preserving the urban wildlife in the city.

What is the story behind your organisation? What made you start this programme?

The reason we started Small Cat Advocacy and Research was because when I graduated, and came back home, I did not have many places to work at. There were no solely conservation-oriented organisations. If there were, I never found any. My colleague and I worked at a few places for a couple of years and then decided that we should start our own project, so that we can run the work in the way that we need to. It was also because most of the places that we worked with had come with a lot of bureaucracy and all these hurdles that we had to jump over, just to get equipment. We believed that if we had our own project, so that if there are other conservationists and researchers who are interested in working on small cats and mammals, they would also have a home base to work from.

We are at Diyasaru Park right now, where you are going to be working with removing invasive species. Why is Diyasaru Park significant?

Diyasaru Park is the main study site for the project. We started here and we want to complete our work here before we branch out. However, during Covid last year, the lockdowns meant that a lot of the staff could not come in to work. The maintenance of the waterways was also ignored. And even though we have managed to clear most of it out now, when we initially started, the waterways were completely clogged with Salvinia and water hyacinths – which are invasive plants. They were clogging the waterways to a point where the water was actually spoiling and if you went close to the water, you could even smell rot off the water. The invasive plants were blocking the sunlight from hitting the water and a lot of the natural vegetation was dying. Now that the water is clearer, the spoiling has stopped and you can see lotuses popping up. We wanted to lend a hand to the workers at the park, as we are conservationists, and help them in their work.

What are the challenges your organisation faces in doing the work that you do?

Two of the biggest challenges that we face are funding, especially because we work on one species and not a lot of people know about it. It’s not the charismatic megafauna that we have. The second challenge is getting equipment into the country. All of the equipment is rather expensive and even though we buy in bulk, we still get taxed per piece of equipment. There doesn’t seem to be a research waiver, and even if there was, it appears to be given to government organisations or universities. Equipment can also either be damaged in the field due to flooding, and sometimes they get stolen. This really sets us back in terms of the work that we have to get done.

Is it correct to assume that you have no support from the government sector and that you function independently?

We do collaborate with the Government and have some stakeholders such as the Department of Wildlife (Conservation [DWC]). We cannot do our work without permission from all these government sectors. They do collaborate with us and support us in the research aspect, such as collecting and disseminating information, using the information that we provide them, and the like. However, in terms of funding, we do not get any government funds, which is fine. We understand that they have a lot on their plate too. So we get funds mainly from international wildlife funding organisations.

Have you come across human pollution that has caused the natural vegetation to die out?

A huge human impact that is detrimental is the amount of plastic pollution. Whatever plastics you can think of, we have found in the waterways. We’ve also seen scat (fish) from a rather large variety of species that have plastic balls in them, which means that animals are ingesting the plastic discarded irresponsibly by humans. During kite season, the string used often strangles birds. We’ve found a lot of dead birds owing to this in the wetlands. People can be more responsible and careful when they fly kites, they can reuse plastic bags and get metal or bamboo straws. When plastics are discarded irresponsibly, they take centuries to break down and it causes pollution and death of wildlife.

What are the main goals and objectives that you want to achieve as an organisation?

We want to make sure that the three small cats in Sri Lanka and their habitats are protected. Not just the small cats; smaller mammals also need this protection. We are so focused on megafauna. I really hope that our work will help people look outside the box and become more aware of other species. They’re just as important to the habitat as the leopard, whale, elephant or bear. If an ecosystem is to thrive, all of the wildlife need to be protected.

As you said, many of us are unaware of the small cats and mammal species. Could you give us a few examples of these species?

The three small cats are the fishing cat, the jungle cat, and the rusty-spotted cat. The rusty-spotted cat is the smallest species of cat in the world. You only find them in Sri Lanka, some parts of India, and some parts of Nepal. Their geographical range is extremely small. Jungle cats are tall and beautiful and the fishing cat is just really quirky. We also have mesocarnivores that weigh less than 16 kg or 18 kg. We’ve got jackals in Colombo, which is incredibly unique. There are mongoose, porcupines, civets, and a whole host of different rodents which are really cool, if you dive deep and learn about them. Reptiles and birds are really fascinating too. Colombo itself has 270 species of wildlife, which is an incredible amount of biodiversity for the capital city.

This goes to the people in Colombo especially. I’d like to invite them to not leave Colombo for their next holiday, and to visit one of the wetlands instead. Enjoy what it has to offer and show that there is value in them. Most of us will not visit these wetlands. And when we don’t show interest in these wetlands, it’s a lot easier for some private agency or government organisation to come along and say that they would want to clear the land for construction. So, let’s show that we value the spaces that we live next door to.

Finally, if graduates, researchers, or volunteers would like to join your organisation, how can they reach you?

If there are graduates or even volunteers and interns, they can contact us through our websites and let us know that they are interested. Of course, there is a bit of a vetting process, simply because of the nature of the work we do. We are a little selective. If you want to complete a project for your degree or simply work with us, you can join us and work under our umbrella. The websites that you can contact us through are; https://scar.lk/ and https://fishingcats.lk/.

And on that note, we embarked on a rowboat journey into the waterways of Diyasaru Park. Anya, along with her team of three, used makeshift equipment in the form of baskets and hooks to remove hyacinths and Salvinia from the clogged waterways. It was immediately clear how taxing and tedious the work is, with hosts of bugs that needed to be swatted away. This tiny team of four individuals was committed to what they do and were valiant in their efforts to preserve the natural flora and fauna of the wetlands. It was an experience that left all of us in awe. We certainly had not seen the amount of labour-intensive work that goes into protecting these waterways so up close, and for us, this was a memory of a lifetime.

As the sun perched itself right above us, and the team worked despite the sweltering heat, we couldn’t help but feel somewhat emotional. We are an island blessed with an incredible wealth of biodiversity and natural beauty; something that we seem to have taken for granted. We’d like to leave you with a thought – if just four people can make such a huge difference in the span of one day, how much change can be cumulatively brought about by the people of Sri Lanka?

August 6, 2021 byNews Admin No Comments
Eco snapping, the term for picking up litter while engaging in wildlife photography, was recently brought to life by globally acclaimed author of Management from The Wild – 101 Lessons Learnt, Sarath

May 5, 2021 byNews Admin No Comments
Why is it that our inner circles grow significantly smaller with time?
I’ve spent some years giving this reasonable thought. Sometimes to the point of abrogating all logic and rationale, and taking..