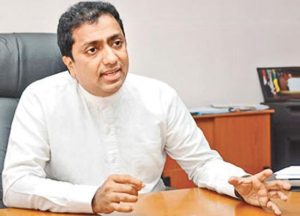 Allegations have been levelled against former Minister of Education Akila Viraj Kariyawasam for misappropriation of funds of the Central Cultural Fund (CCF), one of the principle heritage management institutions in the country, The Sunday Morning learnt.

As alleged by one of the former directors attached to the CCF who wished to remain anonymous, a total of Rs. 500 million has been distributed among 1,000 temples around the country, of which the majority are from the Kurunegala District, without even following the proper procedures.

He further alleged that no criteria were given for the selection method of the temples and a reason as to why the money has been distributed.

Furthermore, the former director stressed that there was no evidence as to whether the exact amount was granted to the temples or not.

The money has been distributed in parallel to the celebration of the former Prime Minister’s 70th birthday, he alleged.

When asked who had given the authority to distribute the money, he stressed that the decisions with regard to the distribution of such funds should be taken by a special board which comprises the Prime Minister, Minister and Deputy Ministers of Cultural Affairs, the secretaries, and several other officials including those attached to the CCF.

Nevertheless, the former director alleged that there were no regular meetings and the funds have been allocated pending board approvals.

However, when contacted by The Sunday Morning, former Minister of Education Kariyawasam denied the allegation, claiming that the funds were distributed among 1,500 temples following all required processes and based on the requirements of the temples.

He, however, denied that the monies have been distributed among the temples in parallel to the former Prime Minister’s 70th birthday celebration.

Meanwhile, the Prime Ministerial Committee appointed to investigate the financial irregularities at the CCF has revealed that Rs. 11 billion was misappropriated during the three-year period from 2016 to 2019.

June 10, 2020 byTSM Web Desk No Comments
All government officials have been strictly advised not to engage in any political campaigns during the upcoming parliamentary election, Ministry of Public Administration Secretary J.J. Ratnasiri said