Ceylon tea: A basketful of issues 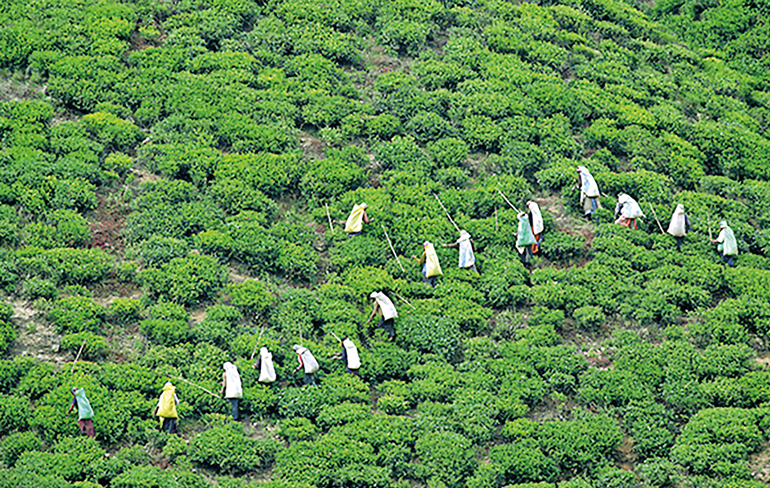 Sri Lanka is one of the oldest tea producing nations with a presence of over 150 years in the industry. With a global market share of 5%, Sri Lanka is the fourth largest tea producer in the world and has maintained its unique position among its global customer base for its aroma and flavour.

Being the largest agricultural product in the country’s export basket, the tea industry has been contributing drastically to Sri Lanka’s overall foreign exchange earnings. The industry consists of players at all levels from large-scale plantations to smallholders.

However, the manufacturers are now concerned about a number of issues that could possibly dampen Ceylon tea’s global significance, if left unaddressed.

As per the comments we received from stakeholders, climate change is considered the biggest issue in the industry. Immediate past TEA Chairman Jayantha Karunaratne told The Sunday Morning Business that the quality of tea has declined drastically, mainly due to climatic changes.

He added that therefore, exporters are finding it difficult to offer tea at the usual quality standards to international buyers.

SLTB Chairman Lucille Wijewardena too noted that climate change has been an issue faced by the tea sector of the country for years, as it plays a vital role in tea crop yields.

There are no finance schemes for building brands and holding stocks without orders for longer periods. Therefore, the exporters have to purchase the minimum required quantity

A study done by Dilmah Conservation Centre for Climate Change Research and Adaptation points out that a number of climatic parameters such as rainfall, maximum and minimum temperature, sunshine hours, relative humidity, and wind velocity affect tea yield, quality, and the growth of pruned tea.

The Tea Research Institute of Sri Lanka (TRI) identified Deniyaya, Kalawana, Nuwara Eliya, and Ratnapura as the most suitable regions for tea plantation and Galle, Matara, Kandy, Matale, and Kalutara as moderately suitable areas. These regions receive monthly average rainfall which is suitable for tea cultivation.

According to the Food and Agriculture Organisation of the United Nations (FAO), increased temperature could cause soils to dry, which in turn reduces yields. The organisation suggests that new suitable land areas need to be found when the case becomes extreme.

With more and more factories adding sugar and glucose in the process of tea production, the number of companies involved in the adulteration of tea has hiked in recent times.

The marketing manager of a leading tea company, who wish to remain anonymous, told us that adulteration has brought down the value and trust placed on the quality of Sri Lankan tea in the global markets.

He added that such wrongdoing by private factories have caused worries among the buyers in terms of health and value for money. The comment was also backed by Karunaratne.

Dissanayake added that the premises of the companies found guilty of adulteration would be temporarily sealed for three months and if the same companies get caught a second time, they might lose their license permanently.

Thirteen companies were sealed in July for tea adulteration.

According to Wijewardena, tea yields have been on the decline due to the low tea replanting rate and lack of infilling.

Sri Lanka requires a minimum of 2% capacity of its total tea production to be replanted annually, which incurs a cost of at least Rs. 8 billion, but currently, barely 1% is replanted.

Despite the higher costs, tea replanting works as a solution for soil erosion in the tea estates. Over 70% of the tea is cultivated by smallholders.

Wijewardena noted that ageing tea bushes and low productivity levels are downsides of the sector. In addition to this, when replanting, the gestation period for a new plantation, including rehabilitation of the land, is around four years. During this period, tea sector workers have to be given concessions by the government.

Even though replanting consumes a large sum in government expenditure, there is a dire need to vigorously carry it out in order to ensure the industry’s viability.

Describing the perennial problems the tea sector has been confronted with over the past several years, Wijewardena stated that the number of tea bushes has reduced from 5,000 per acre to 3,000 per acre at present, owing to the failure in addressing issues of the sector.

Karunaratne noted that international sanctions have pressurised Sri Lanka’s main tea markets and depreciated the currencies of the respective countries, making it costly for both the exporter and the buyer.

Iran is one of the countries that have been isolated through international sanctions, and it has been impacting Colombo tea auction prices. Therefore, Sri Lanka is now planning to export tea to Iran under the barter system over the next two years starting from this month.

According to Wijewardena, a mechanism is in the process of being established to settle an outstanding $ 240 million oil import bill to Iran through Ceylon tea exports. Under the system, tea will be exported to Iran and Ceylon Petroleum Corporation (CPC) will make payments to the Sri Lanka Tourism Promotion Bureau (SLTPB) on a monthly basis.

However, the Government is yet to come up with solutions for exporting tea to other sanctioned countries including Russia, Syria, and Iraq.

According to Karunaratne, there is no financial assistance from the local banks for most of the major markets of Ceylon tea, as the top exporting markets are somewhat sanctioned countries.

He further added that the banks are hesitant and scared to get involved in any sort of transactions or handling financial documentation pertaining to these countries. He also said the industry has been raising this issue with the Government for a very long time.

“Exporters cannot have large orders and process and ship to these markets. Furthermore, there are new restrictions for credit terms to overseas buyers, and exporters are discouraged to continue offer to such buyers and in such markets,” Karunaratne added.

He also noted that there are no finance schemes for building brands and holding stocks without orders for longer periods. Therefore, the exporters have to purchase the minimum required quantity.

Meanwhile, speaking to The Sunday Morning Business, SLTFOA Chairman U.K.H.R. Ranasinghe noted that the industry is forced to pay higher interest rates which are almost double the amount they paid four years ago. He added that they were also requesting for a special loan system for the industry.

“Interest rates have increased by over 6% when we compare with the rates they charged prior to 2015.”

The industry has been requesting for a moratorium for a long time now as a number of factories are heavily burdened with financial difficulties and therefore are at the edge of collapsing.

However, although the moratorium on capital and interest payments of loans was promised for local tea manufacturers by the Government two months ago, it has not been provided due to the lack of a proper mechanism.

Sri Lanka has over 700 tea factories, out of which around 130 are on the verge of collapse and almost 10 factories have already closed down operations. According to SLTFOA, factories are struggling to settle outstanding loans worth Rs. 5 billion and are in urgent need of the moratorium.

Ranasinghe emphasised that the moratorium is an urgent requirement put forward by the companies.

“We spoke to the Ministry of Plantation Industries last week and told them that this is a very urgent matter as the number of financially burdened tea factories keeps increasing. They are going bankrupt,” he added.

According to Ranasinghe, the financial burden of the companies has been created by a drop in tea prices and less crops, especially the shortage of green leaves.

The next major concern for the manufacturers is the cost of production in the industry. The marketing manager of the leading company told us that due to the high cost of production, companies are finding it difficult to pay wages to their workers.

According to him, the high cost of production and not-so-high international prices have resulted in a lower profit margin for companies. He highlighted that firm tea prices would address this issue to a certain extent.

Speaking to The Sunday Morning Business in June, Wijewardena noted that it would take over three years to reap the benefits of the replanting process, which was a massive task which demanded a costly initial investment.

“It costs Rs. 2.5 million to plant a hectare of tea, and this can be a difficult task for small-scale tea farmers as well as industries,” he stated.

Economic Service Charge and other taxes

According to Karunaratne, various taxes on tea exports including cess, promotion and marketing levy, and Economic Service Charge (ESC) are considered burdens to the industry as such costs, when added up, make Ceylon tea uncompetitive in international markets.

Ranasinghe told us that they requested for a reduction in the ESC and raised this issue with the relevant authorities a number of times, but had not received any response so far.

He pointed out that manufacturers have to pay Rs. 0.50% per kilogram, whereas the exporters pay a reduced Rs. 0.25% ESC.

The payment should be made by taking into account the total turnover of the company, where 68% the turnover has to be shared with the smallholders. Ranasinghe suggested that factory owners should only be charged based on their share of the earnings.

When we asked Wijewardena about this, he noted that the relevant gazette was being prepared at the moment.

With a Ceylon tea promotional campaign set to launch in Russia this month, total tea exports are expected to be higher than last year’s export total of $ 1.4 billion.

The industry is now calling for a competitive environment and timely and prompt adaptation of long and short-term strategies to address the issues listed above and many others that prevail in the industry, as these have the potential to push Sri Lanka further down the list of global exporters of tea.

February 20, 2022 byNews Admin No Comments
The Colombo Stock Exchange (CSE) recorded the lowest turnover in four months of Rs. 2.25 billion on Monday (14) as there was lower participation by high net-worth investors due to prevailing economic