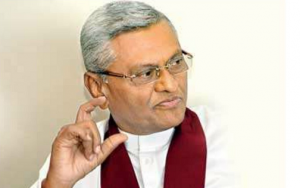 Former Speaker Chamal Rajapaksa has sought a way out from contesting the upcoming presidential election and has sought the opinion of the Election Commission (EC) on the possibility of being replaced at the last minute.

The Sri Lanka Nidahas Podujana Peramuna placed the deposit at the Elections Commission (EC) on Friday on behalf of Chamal Rajapaksa.

Rajapaksa was to contest as an independent candidate in the event Sri Lanka Podujana Peramuna (SLPP) presidential candidate Gotabaya Rajapaksa was prevented from contesting due to legal issues.

EC sources told The Sunday Morning that after the deposit was paid, Chamal Rajapaksa’s representatives had asked the Commission if they can replace the candidate at the last minute, if required.

The EC had responded saying the Commission would need to meet and discuss the issue to decide on the matter.

The opinion had been sought before the Court of Appeal dismissed the citizenship case filed against Gotabaya Rajapaksa on Friday.

SLPP Leader Mahinda Rajapaksa said on Friday night that the SLPP had taken precautions to ensure that even if by today (Sunday) Gotabaya Rajapaksa was prevented from contesting, then there was an alternative in place.

Handing over of nominations by the presidential candidates will take place today.

Chamal Rajapaksa will either withdraw from the presidential race or be replaced by a candidate who will simply be a “dummy candidate” supporting Gotabaya Rajapaksa.

May 25, 2020 byTSM Web Desk No Comments
The temporary ban on the importation of products which was imposed amidst a foreign exchange crisis in April, was relaxed last month as the Government permitted the import of raw materials with prior

October 6, 2021 byNews Admin No Comments
Pointing out that over 500 cases of Covid-19 infections and nearly 50 deaths are being reported daily at present, the Health Ministry has stated that it is therefore imperative that the public continu