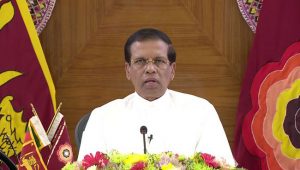 President Maithripala Sirisena has stated that he hopes to affect serious changes among the heads of Sri Lanka’s security forces within the next 24 hours.

He added further that he was not informed of vital information by the heads of the security forces and intelligence agencies and that if he was aware, necessary action could have been taken.

In addition, President Sirisena stated that with the intention of the prevention of terrorism in Sri Lanka, the Police Department and the security forces will be restructured in the near future.

These statements were made during his address to the nation in the wake of the Easter Sunday bombings.

May 11, 2020 byTSM Web Desk No Comments
Another batch of Sri Lankans stranded overseas due to the Covid-19 pandemic was brought back to the island yesterday (10).

August 25, 2020 bythemorningeditor1 liberty No Comments
The GMOA yesterday (24) urged law enforcement authorities to monitor if the public is adhering to the Covid-19-related health and safety guidelines, as the threat would be within the country