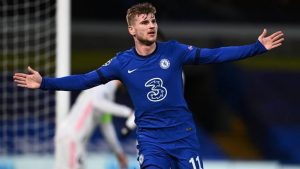 It’s going to be an all-English final as Chelsea booked their ticket to Turkey after a thrilling 2-0 win over Real Madrid in the second leg, securing a 3-1 aggregate on Wednesday (5) at Stamford Bridge.

Pep Guardiola’s Manchester City will play Thomas Tuchel’s Chelsea in an all-English Champions League final after the 2018/19 season. Chelsea booked their spot in the final with a dominating performance against Real Madrid at their own backyard which saw them secure a 3-1 aggregate after the two legs.

German striker Timo Werner scored the opener after 28 minutes when he headed in the rebound after Kai Havertz hit the bar. The Londoners could have scored more in the second half but Werner, Havertz, and N’golo Kante all missed great chances to seal the game. On the other hand, Real Madrid’s only threat was their 33-year old striker Careem Benzema who made Chelsea keeper Eduardo Mendy stretch his limbs a couple of times.

Rightly so, it was Chelsea Born and Bred Mason Mount who sealed the win in the closing stages to send Chelsea to their third Champions League final where they will face a Manchester City whom they defeated at Wembley in the FA Cup semi-finals last month.

Chelsea manager Thomas Tuchel, speaking to BT Sport: “”They deserve to win. First off, it’s difficult because Real had a lot of possession and they made us suffer, but we were dangerous with counter-attacks and never lost the hunger, never lost their desire to defend. The second half was even better, with the structure to defend and in the second half, we could’ve scored much earlier. It’s a fantastic achievement and big congratulations to the team.”

History was made by Chelsea’s boss who becomes the first manager to reach the European Cup or Champions League final in successive seasons with different clubs. Tuchel added: “I’m very happy that we’ve achieved this. I’m very grateful to have the opportunity to live my life in football and this passion as a profession. So grateful to do it on this level and to get to another final, I’m very grateful for that.”

Real Madrid boss Zinedine Zidane who managed his side to Hatrick of Champions League titles said to Movistar: “They deserved the win. We fought and tried but they deserved to win and go through. The players who have played were fit to play. I’m proud of my boys: we tried, we have got this far – just one game from the final. Chelsea played a great match and have gone through and we have to say well done to them.

“Of course we’re not happy. When you lose a semi-final you can’t be happy and that’s normal. It’s tough to take, but tomorrow we’ll be back out on the training pitch ready to go again.”

The final will be played on 29th May at the Ataturk Olympic Stadium, Turkey.

July 9, 2021 byRevatha No Comments
Sports carry on in spite of the pandemic