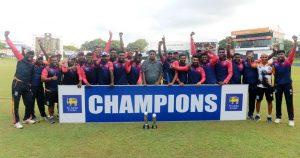 Chilaw Marians Cricket Club became the Champions of the SLC Invitation Limited Over Tournament by beating NCC at the finals played at the SSC Grounds, Colombo, on Tuesday, 31 December, 2019.

Batting first, Chilaw Marians piled up a massive score of 295 runs for the fall of eight wickets in their allotted 50 overs. In reply, NCC only managed to score 204 all out in 43.3 overs.

Kamindu Mendis of Chilaw Marians was chosen as the Man of the Finals for the contributions he made from both the bat and the ball 44 runs in 70 balls and three wickets for 32 runs.

May 15, 2021 byRevatha No Comments
“He’ll be lighting the Olympic flame after this.”