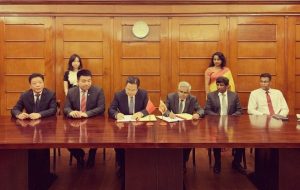 China has signed a concessional loan agreement of 989 million US$, covering 85% of the total contract price of the Central Expressway Project- Section 1.

The agreement was signed today (22) between the Secretary to the Treasury, Ministry of Finance, Dr. R. H. S. Samarathunga and the Ambassador of  China to Sri Lanka, Cheng Xueyuan on behalf of the Export-Import Bank of China.

Previous to this agreement, China had mad several requests and set several standards that had to be met by the Sri Lankan parties involved in the construction of this section of the Central Expressway.

After several discussions and negotiations, the Chinese Embassy and the Sri Lankan Government came into an agreement and the Concessional loan was signed.

China has said it remains committed to enhancing friendships and co-operation between the two states, and bringing more and more tangible benefits to the two peoples.

April 22, 2020 byTSM Web Desk No Comments
11 more patients have tested positive for COVID-19, bringing the total number of patients in the country to 321.

March 29, 2020 byTSM Web Desk No Comments
Sri Lanka recorded its first Covid-19-related death yesterday (28) at the National Institute of Infectious Diseases (IDH), with the deceased being a 60-year-old person from Marawila, the Government an