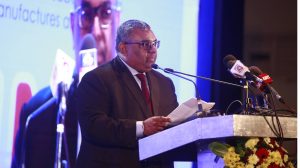 The new Export Development Board (EDB) Chairman Prabhash Subasinghe has expressed his intention of signing the long-delayed Free Trade Agreement (FTA) with China within the next 12–18 months.
“Free trade agreements are very important in identifying new markets. We have an ongoing discussion on the Chinese FTA; hopefully in the next 12-18 months it should be concluded. I believe it is an important one,” he said.
He was addressing his first press conference in his new position on Thursday (30) at the EDB premises.
China is the world’s second-largest economy and an FTA with it has been coveted by Sri Lanka for many years. Negotiations on this FTA finally commenced in 2016, but had come to a virtual standstill by 2018. The main reason for this was reported to be Sri Lanka’s insistence on reviewing the agreement every 10 years, to which China was strongly opposed.
The massive difference in bargaining power between the two nations also meant that China insisted on a zero tariff regime, which would have overwhelmingly benefitted it due to the bilateral trade relationship being dominated by China’s exports to Sri Lanka. China is Sri Lanka’s second-largest source of imports after India. Sri Lanka’s pushback on these proposals is also believed to have contributed to the breakdown in talks in 2017.
The EDB is also planning to formulate a China Market Entry Strategy to boost exports to China and carve a niche in the country for Sri Lankan goods and services. For this purpose, the EDB hopes to obtain the services of an international consultancy firm/consultant, it said in a presentation at the press briefing.

Towards better utilisation of GSP+

The Down South white elephant

October 17, 2021 byNews Admin No Comments
Following the 30-year civil war that ended in 2009, post-war Sri Lanka was on track for development, as the country was united at last. The Mattala airport that commenced construction under the name M