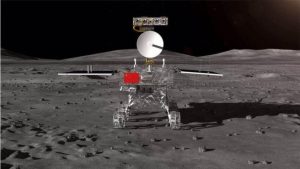 China says it has successfully landed a robotic spacecraft on the far side of the Moon, the first ever such attempt and landing.

It is carrying instruments to analyse the unexplored region’s geology, as well to conduct biological experiments.

The landing is being seen as a major milestone in space exploration.

There have been numerous missions to the Moon in recent years, but the vast majority have been to orbit, fly by or impact. The last crewed landing was Apollo 17 in 1972.

The Chang’e-4 probe has already sent back its first pictures from the surface, which were shared by state media.

With no direct communication link possible, all pictures and data have to be bounced off a separate satellite before being relayed to Earth.  (BBC)

September 21, 2018 byMalik No Comments
A landslide in the Philippines has killed at least 21 people and left dozens missing, with some texting for help from under the rubble, say police.

July 14, 2020 byMalik No Comments
More than 3,000 healthcare workers are known to have died of the new coronavirus, according to Amnesty International, as it raises concerns about unsafe working conditions, low pay, long hours