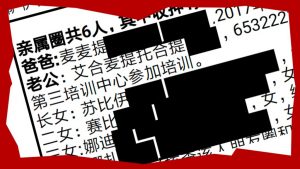 A document that appears to give the most powerful insight yet into how China determined the fate of hundreds of thousands of Muslims held in a network of internment camps has been seen by the BBC.

Listing the personal details of more than 3,000 individuals from the far western region of Xinjiang, it sets out in intricate detail the most intimate aspects of their daily lives.

The painstaking records – made up of 137 pages of columns and rows – include how often people pray, how they dress, whom they contact and how their family members behave.

China denies any wrongdoing, saying it is combating terrorism and religious extremism.

The document is said to have come, at considerable personal risk, from the same source inside Xinjiang that leaked a batch of highly sensitive material published last year.

One of the world’s leading experts on China’s policies in Xinjiang, Dr Adrian Zenz, a senior fellow at the Victims of Communism Memorial Foundation in Washington, believes the latest leak is genuine.

“This remarkable document presents the strongest evidence I’ve seen to date that Beijing is actively persecuting and punishing normal practices of traditional religious beliefs,” he says.

One of the camps mentioned in it, the “Number Four Training Centre” has been identified by Dr Zenz as among those visited by the BBC as part of a tour organised by the Chinese authorities in May last year.

Much of the evidence uncovered by the BBC team appears to be corroborated by the new document, redacted for publication to protect the privacy of those included in it.

It contains details of the investigations into 311 main individuals, listing their backgrounds, religious habits, and relationships with many hundreds of relatives, neighbours and friends.

Verdicts written in a final column decide whether those already in internment should remain or be released, and whether some of those previously released need to return.

It is evidence that appears to directly contradict China’s claim that the camps are merely schools.

In an article analysing and verifying the document, Dr Zenz argues that it also offers a far deeper understanding of the real purpose of the system.

It allows a glimpse inside the minds of those making the decisions, he says, laying bare the “ideological and administrative micromechanics” of the camps.

Trump threatens to expand tariffs on China by another $300 billion

June 6, 2019 byRandev No Comments
US President Donald Trump has warned Beijing that he may hit Chinese goods with another $300 billion in tariffs if necessary, but added that he still hopes for a deal. The levies would target China's

February 26, 2021 byLahiru Pothmulla No Comments
The US military struck a site in Syria on Thursday used by two Iranian-backed militia groups following rocket attacks on American forces in the region in the past two weeks, CNN said quoting an US off