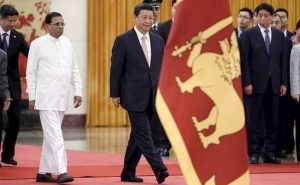 China’s footprint in Sri Lanka is set to expand with Chinese firms now being shortlisted for the proposed Light Rail Transit (LRT) project as well.

China is dominating foreign direct investments (FDIs) in Sri Lanka and according to statistics of the External Resources Department (ERD) of the Ministry of Finance, by 30 September 2018, Sri Lanka had obtained a total of $ 1,968.8 million by way of loans from China. The next highest foreign loan provider is Asian Development Bank (ADB) with a total of $ 1,696.8 million.

According to statistics, at present, around 28 government projects are funded predominantly by Chinese loans worth more than $ 7 billion. The existing projects are spread among the power and energy, roads and transportation, telecommunication, airport and aviation, port, and irrigation and water sectors. They do not include the Colombo Port City project which, in contrast, does not depend on borrowed funds, but is a Chinese investment.

Expanding its investments further in Sri Lanka, China took over operations of the Hambantota Port last year on a 99-year lease agreement while the Export Import Bank of China (EXIM Bank) provided a concessional loan of $ 989 million, covering 85% of the contract price, for the first section of the Central Expressway Project – from Kadawatha to Mirigama – a few months ago. The estimated cost of the project is $ 1,164 million. This loan is the largest loan approved by the EXIM Bank for Sri Lanka.

While China expands the country’s expressways, it has secured another lucrative deal in Sri Lanka as the country is expected to obtain three more Chinese FDIs this year for the new Transport Infrastructure Development project.


The Sunday Morning reliably learnt that the Government had shortlisted six Chinese firms for a deal worth over $ 4 billion to construct the proposed LRT system under the Ministry of Megapolis and Western Province Development.

A top government source, who wished to remain anonymous, said that during the procurement process, 10 proposals were received from the six Chinese firms that were shortlisted out of 17 foreign bidders following the Expression of Interest (EoI) called by the Megapolis and Western Development Ministry in 2017 to construct three lines of the LRT project launched by the Government in 2016. 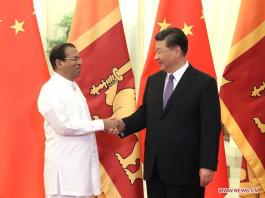 The three Chinese investments would be in the form of FDIs and private-public partnerships (PPPs) in which the Government would hold the majority of shares, according to the proposals received by the investors, sources said.

When contacted, Ministry of Megapolis and Western Development LRT project Deputy Project Director P. Dissanayake told The Sunday Morning that the Ministry was expecting to complete the procurement process within the next six months and to sign the agreements with the selected companies at the end of the year.

He said the first LRT project from Malabe to Fort had already been launched with a Rs. 48 billion loan from Japanese International Corporation Agency (JICA). The total length of the Malabe-Fort LRT is 15.7 km. The three LRTs include the 33-km-long LRT starting from Moratuwa, 28-km LRT from Nugegoda, and 22-km LRT from Malabe, with the estimated costs of the mentioned sections of the line at$ 1,700 million, $ 1,400 million, and $ 900 million, respectively.

“The feasibility studies of the three projects have already been completed,” Dissanayake said.

The construction of the three projects is important in solving the current traffic congestion in Colombo and all projects should be completed to receive the best advantage as the system is a network of roads, he explained.

However, clarifying the procurement process of the LRT project, Dissanayake noted that the investors had been selected through a competitive bidding process and the companies were shortlisted according to their qualifications.

In addition, China Machinery Engineering Corporation (CMEC), the builder of the Lakvijaya Power Station, won a contract worth more than Rs. 4.6 billion to expand its coal yard in March.


The Sunday Morning contacted several experts in the field of economics and international relations to ascertain the impact of the growth in Chinese investments to the country.

“China has excess foreign reserves and at present, 70% of it has been invested in the US. China has a fear that one day, these investments may be frozen by the US Government and therefore, they want to diversify these investments,” he explained.

“That’s why China is purchasing land and investing in farms in Africa to supply food for growing Chinese population as there are already 1.3 billion mouths to be fed in that country,” Wijewardena said.

“This is a new wave. We have to evaluate Chinese investments in that perspective, and also now, Sri Lanka is a beggar. There’s a saying that beggars can’t be choosers; Sri Lanka doesn’t have a choice. We have to understand the fact that Sri Lanka has a very high trade deficit, and with the recent ethnic clashes last month, we have relegated from a stable position to negative one, and FDIs are not coming in. No one with a worthwhile investment plan would actually invest in Sri Lanka right now,” he said.

Evaluating the Chinese projects in Sri Lanka, he said: “Most of the projects from China are unsolicited proposals. There must be a mechanism in Sri Lanka to evaluate these projects to see whether these are needed. Currently, there’s no such mechanism.

If they propose a port in Puttalam, you can’t do anything because you don’t have a plan,” Wijewardene said.

Highlighting that some of the Chinese projects in Sri Lanka are not generating sufficient foreign exchange earnings, he stressed: “We have not been able to generate the necessary foreign exchange to repay these loans. We’re in big trouble. An alternative the country has is to go to commercial markets to source funds.

“But that will not work for Sri Lanka because the majority of those funds would be spent on the luxuries of ministers. However, when it comes to Chinese investments, at the very least, the country develops valuable projects that can be sold to someone later on,” Wijewardena said.

He went on to say: “The BRI – a tool to plug infrastructure financing gaps – can be a game changer for Asian countries like Sri Lanka. However, as seen in the case of the Sinamalé Bridge in the Maldives, the railway project linking Jakarta to the textile hub of Bandung in Indonesia, and the Gwadar Port in Pakistan, various risks can arise from large-scale infrastructure projects. ‘White elephant’ projects may occur, commercial loans may affect debt sustainability, governance issues and rent-seeking behaviour may arise, and negative environmental impacts may be visible.”

The Lakshman Kadirgamar Institute of International Relations and Strategic Studies, together with Chatham House, London, is conducting an academic study to ensure that Sri Lanka maximises benefits while minimising costs of future BRI investments.

Meanwhile, Ceylon Chamber of Commerce Chief Economist Shiran Fernando said: “Leverage in terms of debt from China is only about 9% of our outstanding foreign debt stock, though it has increased in the last decade. Given Sri Lanka’s graduation into the middle-income level and less access to non-concessional financing, the country has to carefully balance its debt obligations with its development objectives.”

Speaking to The Sunday Morning, Central Bank of Sri Lanka Monetary Policy Consultative Committee Chairman Prof. Sirimal Abeyratne said: “It is a choice for Sri Lanka or any other country to welcome Chinese investment or not. By choosing to go with China, Sri Lanka has the advantage of benefiting from rapid economic development. Sri Lanka also has the option of remaining in isolation without opening the door for Chinese investment, forgetting the potential benefits of integration.

Although Sri Lanka would choose to do so, it is noteworthy that Chinese investments are much more in the US, UK, and some EU countries than in a developing country like Sri Lanka.”

He explained that while Sri Lanka suspended Chinese projects in 2015 for two years and waited for western investments to turn up, it did not happen. “Then, it also had to turn towards China again. In fact, it is good to create a competitive investment climate within Sri Lanka so that there will be some other investments from other countries to compete with Chinese investments,” he said.

“China has a long-term global vision and a robust plan for that. This is clear from China’s development experience which already elevated it to the position of the second-largest economy in the world, and from China’s Belt and Road Initiative (BRI). Chinese BRI is an infrastructure project for multidimensional connectivity along 65-plus countries and two-thirds of world population therein,” he went on to say.

According to Prof. Abeyratne, the BRI project is a short cut for Sri Lanka’s efforts in global integration.

“Many countries would derive mutual benefits from this project in the years to come. Sri Lanka’s debt issue, infrastructure projects with no immediate returns, and corruption, are all internal problems of management and not the problems of foreign investments,” he added.

On a rampage! Monk threatens to go on slapping spree

January 5, 2020 byEaswaran No Comments
A Buddhist monk seen on videos circulating on social media, slapping a man and also threatening another, accusing them of engaging in illegal conversions, said that he will not stop till the authoriti

January 7, 2019 bythemorninglk No Comments
The Ministry of Defence decided to recall firearms licences as part of a war on crime launched using the Police and the military.