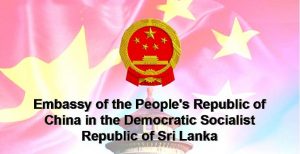 The Chinese Embassy in Colombo has informed its nationals from Coronavirus affected areas including Hubei Province to cancel or postpone their visits to Sri Lanka, the Embassy said in a press statement.

The Embassy added that Chinese authorities have responded to the epidemic with the highest attention, and have taken strict measures to control it from further spread.

It has also fully cooperated with Sri Lankan departments and taken effective precautions, trying the very best to protect Sri Lanka and its people from the epidemic, the release said.

The Embassy says that the following measures have been taken by the authorities:

Organic fertiliser to be imported

August 10, 2021 byNews Admin No Comments
The Government has decided to import organic fertiliser, natural minerals, and chelated (a type of bonding of ions and molecules to metal ions) plant nutrients for the Maha harvesting season of 2021/2

January 16, 2021 byLahiru Pothmulla No Comments
A total of 695 COVID-19 cases were reported yesterday out of which 27 cases had no accurate addresses, the National Operations Centre for Prevention of COVID-19 Outbreak (NOCPCO) said this morning.