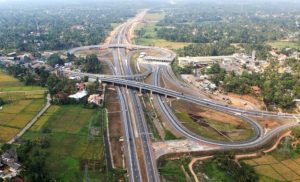 China is yet to release funds promised for Section I of the Central Expressway Project (CEP) as Sri Lanka is yet to meet its commitments to the deal, The Sunday Morning learnt.

The loan agreement was signed between Sri Lanka and China in March to provide a concessional loan amounting to $ 989 million by the Export-Import Bank of China (EXIM Bank) covering 85% of the contract price for the CEP Section I between Kadawatha and Meerigama.

The total estimated cost of the project is $ 1,164 million of which 15% has to be provided by the Government of Sri Lanka, according to the agreement.

The External Resources Department (ERD) of the Ministry of Finance Director General Priyantha Ratnayake told The Sunday Morning that the connected counterpart funding from Sri Lanka had to be mobilised first, and only then will the Chinese funding be released.

“It is a nearly $ 1 billion transaction. We have to fulfil some of the conditions to disperse the money. The local financing loan is now finalised. That money will be dispersed within the next couple of weeks. Then we can expect the Chinese funds as well,” he added.

Highlighting the overall Chinese funded projects in Sri Lanka, the ERD DG said: “There was a little delay in dispersing some of the committed funds due to technical reasons such as environmental studies and land acquisition problems. When it comes to land acquisition, China wanted the Government of Sri Lanka to acquire and compensate all the families before it starts new projects. Some of the lands scheduled to be acquired are still in the acquisition process. So it will take a little time. Once the process is completed, they will release the money.”

“But for the normal projects, the funding is coming and there is no issue,” he added.

However, when contacted, Road Development Authority (RDA) Chairman Nihal Sooriyarachchi said there was no delay on the part of Sri Lanka releasing funds for the project.

He said the decision to sign the agreements had been reached after the budget, and therefore, funds were not allocated for the CEP Section I of the project.

“It’s a little difficult for the Government to pay around Rs. 30 million suddenly as it has no extra money. So the RDA and the Treasury have arranged a bank loan to provide 15% of the funding for the CEP Section I,” he stressed.

Sooriyarachchi also noted that the necessary approvals need to be taken in order to proceed with the loan. “We have submitted the cabinet papers and it will come before the Cabinet soon,” he added.

State Minister of Finance Eran Wickramaratne said the Government had made allocations for the project and it would go ahead with the project.

“We have also signed a JICA loan agreement and Millennium Challenge Corporation (MCC) has also approved another $ 480 million to Sri Lanka. That’s mainly going into public transport and traffic management. Part of it goes to the land registry. In addition, we are spending money for Gamperaliya. All these projects are going ahead.”


The Sunday Morning contacted the Chinese Embassy in Colombo and asked if there was a delay on the part of the Chinese Government when releasing funds to Sri Lanka after the Easter Sunday attacks.

The Spokesperson and the Chief of the Political Section of the Chinese Embassy in Sri Lanka Luo Chong said that there was no such delay.

“Our policy has never changed. After the attacks, our support to Sri Lanka was neither changed nor reduced. Actually, we give more support to the Government and the people,” Chong said.

June 5, 2022 byNews Admin No Comments
The general education system in Sri Lanka is gearing to apply drastic changes to its traditional teaching methods with effect from the first academic term of 2023, with plans to bring in research-base

September 6, 2021 byNews Admin No Comments
The Health Ministry has stated that it will take some time to reach a final decision regarding the provision of Covid-19 vaccines to children, since further in-depth studies need to be carried out int