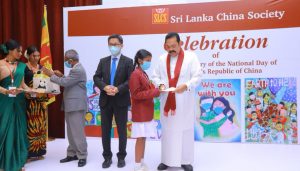 The 71st National Day celebrations of the People’s Republic of China organized by the Chinese Association of Sri Lanka were held under the patronage of Prime Minister Mahinda Rajapaksa at the Bandaranaike Memorial International Conference Hall in Colombo yesterday (28).

Every year, China celebrates its National Day on October 1 to commemorate the fall of the Qing Dynasty, the Wucheng Rebellion, and the beginning of the People’s Republic of China.

The Prime Minister also presented certificates and prizes to the first, second and third place winners of the Asian Regional School Art Competition organized by the Government of China.

Candles in the Wind

February 8, 2021 byNews Admin No Comments
Dedicated to the memory of Dr.Neville Fernando and Dr.Gayan Danthanarayana, who laid down their lives in service of patients and succumbed to Covid-19.

February 16, 2021 byNews Admin No Comments
Who judges the judges? Between the harsh spotlight of the fourth estate, the apathy or vitriol of the court of public opinion, the hindsight of posterity, and the cat-and-mouse game pertaining to...