Denmark midfielder Christian Eriksen is “awake” in hospital after collapsing in the Euro 2020 match against Finland, said the Danish Football Association.

The 29-year-old Inter Milan player’s condition has “stabilised”, according to tournament organisers Uefa.

The game in Copenhagen was suspended before half-time after the former Spurs playmaker fell to the ground and was given emergency treatment on the field.

Danish players were applauded on to the pitch by their opponents as they returned to the field to resume the game.

Uefa said it agreed to restart the match “following the request made by players of both teams”.

The final five minutes of the first half were played, before a five-minute half-time break and the second half.

Peter Moller of the Danish Football Association told Danmarks Radio: “We have been in contact with him [Eriksen] and the players have spoken to Christian. He is doing well and they are playing the match for Christian”. 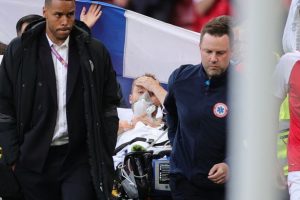 Denmark head coach Kasper Hjulmand was in tears at the post-match news conference.

“It was a really tough evening, on which we’ve all been reminded what the most important things in life are. It’s meaningful relationships. It’s those people who are close to us. It’s family and friends,” he said.

Uefa president Aleksander Ceferin said: “Moments like this put everything in life into perspective. I wish Christian a full and speedy recovery and pray his family has strength and faith.

“At these times, the unity of the football family is so strong and he and his family carry with them the good wishes and prayers of everyone. I heard of fans of both teams chanting his name. Football is beautiful and Christian plays it beautifully.”

Saturday’s other Group B game between Belgium and Russia took place as scheduled at 20:00, with Belgium winning 3-0.

Belgium striker Romelu Lukaku, who scored twice, paid tribute to his Inter team-mate on opening the scoring, saying to the TV cameras “Chris, I love you”.

After his match, Lukaku said: “I enjoyed the game but for me, it was difficult to play because my mind was with my team-mate Christian Eriksen.”I cried a lot because I was scared, obviously. You live strong moments together. I spent more time with him than with my family. My thoughts are with him, his girlfriend, his two kids and his family.”

The Denmark-Finland game was goalless approaching half-time at about 17:45 when the incident happened.

Manchester-born referee Anthony Taylor immediately called for medical support and Eriksen received CPR (Cardiopulmonary resuscitation) before the players were taken off the pitch and the match was postponed.

“The match has been suspended due to a medical emergency which involved Denmark’s Christian Eriksen. The player is now in hospital and in a stable condition,” said a Uefa statement.

“Uefa wishes Christian Eriksen a full and speedy recovery and wishes to thank both teams for their exemplary attitude.”

The incident happened as a throw-in was played towards Eriksen near the end of the first half. 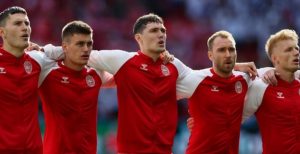 His distressed team-mates surrounded him and the shocked supporters at Parken Stadium were visibly upset as the player was treated.

Eriksen’s club, Inter, tweeted: “Forza Chris, all of our thoughts are with you.”

Former team Tottenham said: “Get well soon, Christian. The whole Spurs family is with you.”

Last month, Eriksen helped Inter Milan clinch their first Italian title for 11 years in his first full season with the club, after joining from Spurs for £16.9 m in January 2020.

The BBC broadcast the fixture and apologised after images of Eriksen receiving treatment were shown.

A spokesperson said: “Everyone at the BBC is hoping Christian Eriksen makes a full recovery.

“We apologise to anyone who was upset by the images broadcast.

“In-stadium coverage is controlled by Uefa as the host broadcaster, and as soon as the match was suspended, we took our coverage off air as quickly as possible.”

July 9, 2021 byRevatha No Comments
Sports carry on in spite of the pandemic