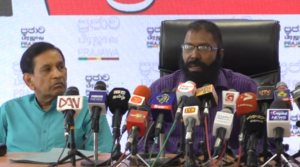 The Criminal Investigation Department(CID) has arrested two persons who have claimed to be a ‘white van’ driver and a white van abduction victim.

The white van press briefing was held in the run up to the presidential elections.

February 16, 2021 byNews Admin No Comments
A one-day business forum is scheduled to be held in Colombo with the participation of a top-level delegation from Pakistan during Pakistani Prime Minister (PM) Imran Khan’s visit to Sri Lanka..