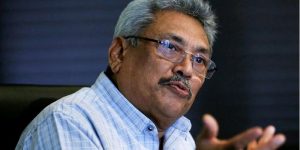 The Criminal Investigation Department (CID) is pushing ahead with investigations on Sri Lanka Podujana Peramuna (SLPP) presidential candidate Gotabaya Rajapaksa and is to submit more details to court before the presidential election.

Police sources told The Sunday Morning that the CID was investigating Rajapaksa over allegations he violated the Immigrants and Emigrants Act in 2005 and will look to submit more details to court before 16 November.

Sources revealed that investigators were pushing ahead with the probe in order to complete the process soon.

On Friday, the CID had opened the case against Rajapaksa but the Colombo Chief Magistrate ordered the case to be put on hold until sufficient evidence was produced in court.

The CID had initiated the investigations into an alleged voter fraud case involving Rajapaksa after a complaint was filed at the Police Headquarters by the Convener of the Purawesi Balaya movement Gamini Viyangoda and Prof. Chandragupta Thenuwara.

He also alleged that the Government was trying to sling mud at Rajapaksa by using the Police at a time when the election had been declared.

“Rajapaksa had become a green card holder in 1992 and obtained US citizenship in 2003. But in 2004, his name was mentioned in the voter register. Subsequently, in 2005, his brother Mahinda Rajapaksa became the presidential candidate and Rajapaksa returned to Sri Lanka to help his brother’s campaign. At that point, he got to know that he also had a vote in Sri Lanka. Even though the 2005 election was one of the most competitive ones, Rajapaksa refrained of casting his vote,” he explained.

The allegations have helped him to prove his innocence, Gammanpila said.

Furthermore, he stressed that even though Rajapaksa was a victim of a political witch-hunt and might be arrested in the future, nobody could stop him from winning the upcoming presidential election.

October 13, 2021 byNews Admin No Comments
Contradict PM’s Office claim of ‘successfully ending’ strike
To continue strike demanding salary hike in one go
Threaten to continue for ‘100-150 days and even beyond’