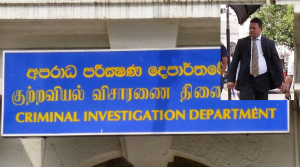 Police Media Spokesman SSP Ruwan Gunasekara said Silva had not applied for leave nor had informed the police.

Silva has been involved in investigating several controversial cases within the CID including the assassination of Sunday Leader Editor Lasantha Wickrematunge, the abduction and assault of Journalist Keith Noyahr, and assaults suffered by Upali Thennakoon and Namal Perera.

He was also the main officer investigating the abduction and murder case of 11 youths.

Last week Director of the Criminal Investigation Department (CID) SSP Shani Abeysekera who was overlooking the above mentioned high profile cases was ordered to be transferred as the Personal Assistant to the Southern Deputy Inspector General (DIG) of Police, just days after the presidential election.

October 23, 2020 byCharindra No Comments
Minister of Industries Wimal Weerawansa, in line with the Government’s new industry and trade policies, proposed to consider Lanka Salusala Ltd. for textile purchasing to promote the institution.

New antivenom for all local snakes

February 4, 2021 byNews Admin No Comments
A collective of Sri Lankan scientists have developed an antivenom to be used to treat snakebites from snake species found in Sri Lanka, ranging from those which are mildly venomous to highly toxic..