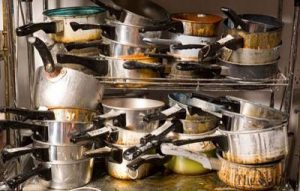 Recent raids conducted by the Colombo Municipal Council (CMC) on several restaurants in Colombo revealed that many have been serving food in less than sanitary conditions, violating food safety regulations.

Speaking to The Sunday Morning, the Chief Medical Officer (CMO) of the CMC Dr. Ruwan Wijayamuni stated that the CMC has intensified inspections of all eateries in Colombo, and several restaurants were subject to a thorough inspection on the instruction of the Mayoress of Colombo Rosy Senanayake.

He stated that they had deployed all 46 public health inspectors (PHI) and six medical officers of health (MOH) who were divided into six groups led by the MOH officers.

He stated that the CMC has completed one administrative district, out of the six in Colombo; Colombo North, Colombo Central A and B, Borella, Colombo East, and Colombo West.

Footage leaked of the raid of one popular restaurant, Calorie Counter, revealed a large amount of decayed, bacteria-infested food, that was stored inside a refrigerator within the premises. The video featured blackened meat, rotten vegetables, and frozen food that was unsuitable for human consumption.

“After having received instructions from the PHIs on remedial measures, the highlighted food items were removed and destroyed immediately in their presence. We rectified all measures highlighted by the PHIs within three hours and our storage facilities were cleared and revamped as per required standards by them. I would like to categorically state to my loyal customers that at no point was the restaurant sealed,” Calorie Counter said in a statement later.

Another restaurant, “Kami Maki Colombo”, was also raided in the presence of two private TV channels.

A letter addressed to Dr. Wijemuni by the Director of Plan B Venue Management (Pvt.) Ltd. Thoshan Ediriweera stated that “ the TV coverage has caused irreparable damage to my business and we have no customers visiting us because of the bad coverage given on TV”.

He stated that the raid was conducted with a lack of procedure and regard to personal space.

“Two PHI officers entered our premises and spoke to a cook and without the use of gloves or any other hygienic attire rifled through our freezers, stores, and fridges disarranging them and contaminating them. Shortly after, a doctor by the name of Dr. Mendis and another PHI officer came in.

Dr. Mendis did not inspect the place but called the camera crew by phone to come to the premises and record.

At no point did anyone request the permission of the persons on duty or the management to come into the restaurant premises or to inspect the premises or to bring in a private camera crew,” the letter said.

Dr. Wijayamuni agreed that the footage might have caused a considerable amount of damage to the company, yet the public has the right to know the truth about what they are consuming. He stated that this was the first time a raid had been carried out on such a vast scale.

Dr. Wijayamuni stated that the CMC had no interest in targeting any party and was independent and solely working for the benefit of the consumers and the public.

The CMO officer stated that the CMC had succeeded in inspecting 163 restaurants, taken action against 65 and issued 25 notices.

US and Sri Lanka seek consensus

May 27, 2019 bythemorninglk No Comments
The US and Sri Lanka are attempting to seek a consensus on a controversial agreement, which has come under strong criticism from the Opposition and some members of the Government as well.

March 3, 2019 bythemorninglk No Comments
The Ministry of Defence told The Sunday Morning that the Government was not willing to send the Sri Lankan Consul to represent the group