Following the re-emergence of Covid-19, which hampered the usual operations of the Colombo Port for several weeks, mainly due to the low employee turnout, the Sri Lanka Ports Authority (SLPA) last week said its operations have now returned to normalcy, thereby assuring the continuous supply of essentials to the local market. 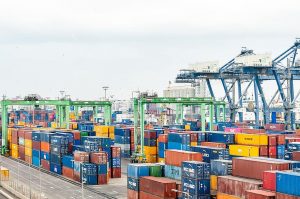 Speaking to The Sunday Morning, SLPA Chairman General Daya Ratnayake said that employees are now returning to work, adding that it took immediate steps to hire retired employees to fill the vacancies that arose, as a number of employees had to undergo the quarantining procedure.

“We expect the full capacity of the operations by the end of this week,” Gen. Ratnayake said, adding that from 13 November, operations were gradually increased.

When queried about the vessels bypassing the Colombo Port due to the Covid-19 threat at JCT, the SLPA Chairman reiterated that everything would be normalised by the end of this week and there wouldn’t be any essential items in short supply.

However, admitting that there is a serious issue in handling operations, Gen. Ratnayake said: “We had a serious issue due to the coronavirus situation. The Port is situated in the worst area of the country; a majority of port workers live in the Gampaha District as well as in the Bloemendhal, Modara, and Mattakkuliya areas. These areas have now been severely affected by the ongoing pandemic. Around 30% of workers are from Gampaha and more than 600 quarters of the SLPA are situated in these areas.”

He told The Sunday Morning that in spite of these issues, the SLPA was running the Port 24/7.

“We need a large number of employees to operate the JCT. The Port’s activity revolves around the JCT and we had 30 Covid-19-positive cases plus 200 first contacts. They have been sent to quarantine. This is not a management issue. We have followed all required health guidelines,” the SLPA Chairman said.

He said that although there are workers, specially-trained people were needed to operate gantry cranes.

Meanwhile, all services, work, or labour at the SLPA were declared essential public service by President Gotabaya Rajapaksa, with effect from Tuesday (17) night.

The order by the President was made under the Essential Public Services Act No. 61 of 1979 by way of a gazette notification.

It applies to all services, work, or labour of any description necessary or required to be done by or in connection with the SLPA established by Section 3 of the Sri Lanka Ports Authority Act No. 51 of 1979, the gazette notification issued by Secretary to the President Dr. P.B. Jayasundera read.

However, the declaration of the SLPA as an essential service has been described by port trade unions as an attempt to suppress any possible union action by the Government.

Speaking to The Sunday Morning, Niroshan noted that the declaration of port operations as an essential service was a direct attempt to avert any possible union action against the SLPA management on ongoing issues faced by SLPA employees.

“Now the employees are returning to work. The management promised that an employee would work for 14 days continuously and be sent home after conducting a PCR test, which is a very good move to control the spread of the virus. But we received information that the management has given permission for some employees to go home even during the 14-day period by putting the entire staff of the SLPA, as well as the country, at risk,” he said.

Urging the management to strictly implement the decisions taken to control the virus equally, the union member noted that the management feared port unions would launch a protest against the management at this time, citing that as the reason behind the Government declaring SLPA operations an essential service.

It is learnt that many ships that were scheduled to unload at JCT had bypassed and instead gone to the nearest other destinations due to the Covid-19 threat, after 30 employees tested positive for Covid-19. The authority has also requested some vessels to divert their destinations instead of coming to Colombo directly, as there is a serious delay due to the lack of port employees.

The SLPA Chairman, however, assured that there wouldn’t be any overall delays due to operation delays.

In the meantime, Essential Food Commodities Importers and Traders’ Association (EFCITA) President G. Rajendran also said the delays have now been rectified. He asked the public not to panic, as the supply of essentials has not been affected due to the delays in unloading shipments.